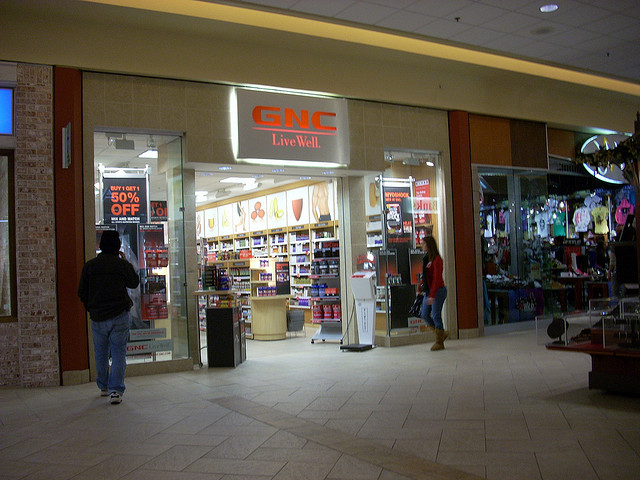 GNC’s humble beginnings started in 1935 in Pittsburgh, Pennsylvania when David Shakarian opened a small health food store called Lackzoom. Initially, Shakarian sold yogurt, a product his father helped bring to the U.S. Business was slow in the beginning as many people thought health food was just a passing fad. Shakarian did earn enough to open a second store and during WWII, he began accepting mail orders for his products due to the gas rations.

Things picked up for Shakarian in the 60s with the sudden boom in interest for health foods. As the health food craze swept the nation, Shakarian finally expanded outside of Pittsburgh and rebranded his stores as the General Nutrition Center. GNC began making their own supplements, vitamins, foods, and even cosmetics. Shakarian continued to run the company until his death in 1984.

After his death, GNC changed ownership numerous times. Shakarian’s family first sold the company to Jerry Horn immediately after Shakarian’s death. Horn then sold GNC to The Thomas Lee Company, a private equity firm, in the late 80s. Franchising soon began for GNC in 1988. The company was sold again in 1999 to Royal Dutch Numico. They then sold to Apollo Management in 2003. In 2007, Apollo Management sold to Ares Management and GNC went public in 2011. Today, GNC has more than 9,000 locations throughout the U.S. and around the world.

After an abysmal earnings report in the beginning of 2016, GNC hired Goldman Sachs and law firm Wachtell, Lipton, Rosen & Katz to advise on “strategic and financial alternatives.” GNC is currently weighing their options and this could result in the sale of the company or other strategies like shifting company owned locations to franchisees. Revenue, same-store sales, and net income for 2016 have been down overall from last year.

Part of GNC’s problems stems from federal regulators cracking down on the dietary-supplement industry. In 2015, GNC faced controversy after the New York and Oregon attorneys general confronted the company over their ingredients and testing procedures. The publicity may have shifted public perception of GNC. In the first quarter of 2016, GNC had to deeply discount many of their products as they were approaching their expiration date.

At the end of July 2016, Mike Archbold suddenly announced he would immediately step down as CEO after only being with GNC for less than two years. In recent years, GNC has seen a decline in sales. Same-store sales for domestic company-owned stores have decreased 3.7% in the second quarter of 2016. Domestic franchise locations have experienced a 6.6% decrease for the second quarter of 2016.

GNC’s board has brought on Robert Moran, a director of GNC and the former Chief Executive of PetSmart, Inc., as interim CEO immediately following Archbold’s departure. Since Archbold’s announcement, GNC has halted their earnings guidance and their stock buyback program.

GNC’s shares fell 26% the day of Archbold’s departure. Overall, GNC shares have been down 34% for the year.

GNC spent the beginning of summer raising money and spreading awareness for The USA Track and Field Foundation. Overall, the company raised $85,000, with 100% of the proceeds going to the foundation. The GNC Live Well Foundation personally donated $10,000 and the rest of the earnings came from customers and associates.

The U.S. Track and Field team is the only privately-funded team and many of the athletes urgently needed money to get to Rio. Over 30 athletes from the USATF Foundation sponsorship roster qualified for the Olympics and the money GNC raised helped to fund their medical expenses, equipment, and travel costs.

Though sales have been sluggish for GNC, they placed high on Entrepreneur’s Franchise 500 list for 2016, landing a spot at No. 15. This is a pretty large leap from No. 23 on last year’s list. Overall GNC ranks well on the list, usually hovering in the top 30. Their lowest point on Entrepreneur’s list was 68 in 2010. Their No. 15 spot on this year’s list is the highest ranking they have achieved.