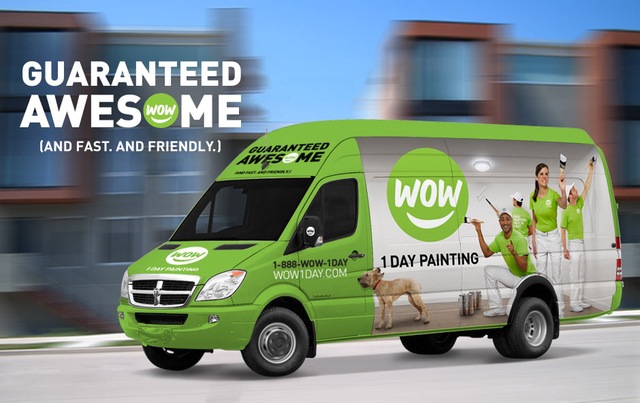 Brian Scudamore is on a mission to transform traditional service-based industries with approaches and models for the 21st century. His growing family of enterprises live under an umbrella company called O2E Brands (ordinary to extraordinary) and include Shack Shine, You Move Me, and 1-800-Got Junk?

He’s the founder and CEO of Wow 1 Day Painting, which he started in order to show how superior painting services could be provided to homeowners in just one day. Founded in 2008 and franchising since 2010, the number of locations currently stands at 34, 10 of which are outside the U.S. (Brian lives in Vancouver, BC).

Brian Scudamore is bringing fresh thinking and tons of energy to the different franchises he brings together in O2E Brands, and he’s accumulating the awards to prove it. He’s been in the media spotlight with appearances on ABC Nightline, Undercover Boss Canada, and the Hoarders reality show with A&E, as well as coverage through Fortune, Entrepreneur, Inc., the Wall Street Journal, Fox Business, CNN, the Globe & Mail, and the National Post.

Awards include the International Franchise Association’s Entrepreneur of the Year Award in 2007 and induction into the CEO Hall of Fame for lifetime achievement in 2012.

The basic idea here is to go above and beyond in quality and customer service, providing top-notch interior and exterior painting services delivered in the space of just one day to minimize disruption in the home and time spent on projects.

It’s about having a family leave for work and school in the morning and returning at the end of the day to a fresh paint job done well, down to every detail, along with a card signed by the whole crew leaning up against a bouquet of fresh flowers, all delivered at a competitive price. Wow!

Based on a Real Model

Scudamore didn’t come up with the idea for his latest franchise effort. He had actually hired a painter named Jim Bodden to do a painting project at his own house. Bodden and his company, One Day Painting, were exceptionally professional from the get go, and promised to have the project done in one day. Scudamore was thoroughly impressed with the results and realized the concept could be franchised.

By committing to completing a project in one day, you make more money and minimize time spent on cleaning and prepping for a second day (or more) of work. It just made sense.

Also, knowing the project will be done in one day makes the decision that much easier for consumers – it’s one of the quickest, least expensive ways to spruce up a home.

A No-Brainer for Consumers

Think about it, if you can get the same or better quality paint job for the same price and have it done in just one day instead of several days or even weeks, why wouldn’t you go for it?