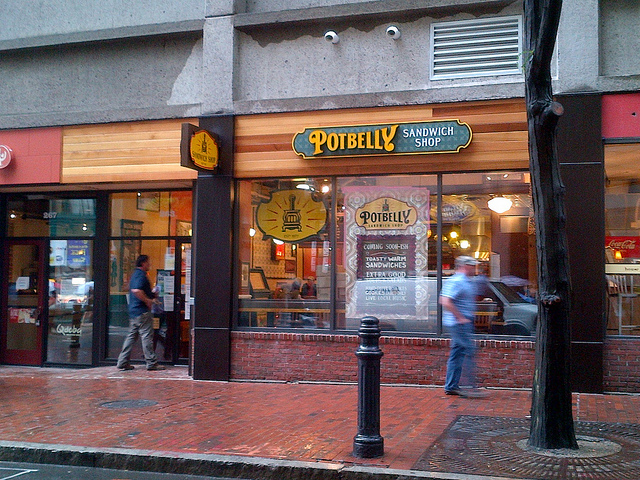 Potbelly Sandwich Shop bills itself as a neighborhood eatery, but the neighborhood keeps expanding. The chain has surpassed 400 locations and is entering new territories, although without losing its emphasis on local flavor in the individual restaurants that operate.

The chain announced in September 2016 that it would open its first restaurant in the Des Moines, Iowa, area this year and add another in the spring of 2017. Paul Goldhammer of Sioux Falls, S.D., is the owner of the Iowa Potbelly locations. Other stores are planned for development throughout Iowa.

California is another big addition for the sandwich chain. Potbelly Sandwich Shop headed into 2016 with plans to expand into Southern California. The brand announced in December 2015 that it was seeking franchisees in Orange County and was also interested in development in San Diego, Riverside County, the East Bay and the Central Valley.

The first stores are expected to open in 2017. Among the locations planned is a shop along Westwood Boulevard in Los Angeles.

The brand seeks successful, motivated people who enjoy working on a team and have strong business experience, which need not be in restaurants. The Potbelly model is a two-person team, such as a family or business partnership.

Peter Hastings founded Potbelly Sandwich Shop in 1977 in Chicago, using decor from the antique store Hastings had previously run in the same location. The Potbelly name came from the potbelly stoves he sold in the store and which are still a fixture in every location.

Bryant Keil bought the original store in 1996 and rapidly expanded the company, which went public in 2013.

Today, Potbelly has more than 400 shops in more than half of the states in the U.S. and within the United Kingdom and the Middle East.

One of the highlights of the brand is the hiring of local musicians to play during lunch. Diverse talents provide entertainment in genres such as rock, folk, blues and jazz.

Potbelly serves toasted sub sandwiches within an atmosphere of local culture. Stores have unique decor, with artwork and repurposed items that are reflective of the neighborhoods and communities.

Customers can get basic sandwich varieties such as a turkey breast sub or a meatball sandwich, as well as more trendy offerings such as the Mediterranean, which combines hummus, feta cheese, artichoke hearts, cucumbers and red peppers.

The brand’s signature sandwich is the Potbelly’s Wreck, well-packed with ham, turkey, roast beef and salami.

For those looking to cut calories and carbs, the menu offers Skinnys, sandwiches that feature less meat and cheese and use thinner bread to come in under 400 calories. All sandwiches can also be prepared with thin-cut bread, which cuts out about a third of the bread, or as “flats,” featuring thin multi-grain bread.