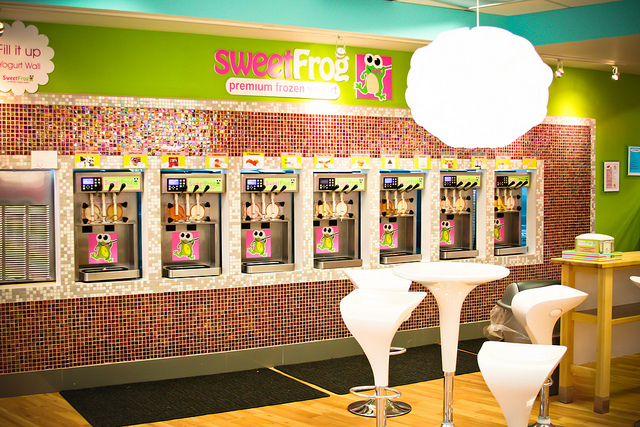 The sweetFrog frozen-yogurt chain took to the road as the company began selling truck and trailer franchises in June 2016 in addition to permanent locations.

Pat Galleher, managing director of sweetFrog parent company Boxwood Capital Partners, told Richmond Biz Sense that the expansion will enable smaller markets to have sweetFrog franchises. The cost of a truck or trailer franchise is about $120,000, compared to $232,000 to $453,000 for a brick-and-mortar location, he said.

The chain showed off its mobile units in June at the International Franchise Expo in New York City.

SweetFrog jumped on the Pokémon GO bandwagon in July by sponsoring a Pokémon GO Takeover. Players nationwide were invited to stop in for discounts whose amounts varied on their levels (Level 1-5 got a 10 percent discount, Level 6-15 got 25 percent off, and Level 16 and higher received a 50 percent discount).

Brian Partlow was named sweetFrog’s chief financial officer in June 2016. Partlow has more than 15 years of finance and accounting experience, including positions as corporate controller for TruePath Wireless, CFO for Zero Point, and director of financial planning and analysis for ATK Blackhawk.

Derek Cha founded the company in 2009 with a single store in Richmond, Virginia, and quickly expanded, with more than 100 locations opening in the first three years.

Boxwood Capital Partners bought the majority stake of the company in 2015 from Cha, who also served as CEO.

SweetFrog currently has more than 350 locations, including several international stores. The chain is seeking franchisees in the Southeast, Midwest and New England markets in the U.S. It also is looking for master franchisees to develop international sites.

The stores sell premium frozen yogurt and toppings. The frozen yogurt flavors range from pineapple to pumpkin and include classics like cherry and blueberry and eye-openers like Maple Bacon Donut and Root Beer Float. Fruits, candies, nuts and more are on the list of toppings.

The brand is highlighted by pink-and-green decor, along with mascots Scoop and Cookie, who are also pink and green. Customers serve up their own frozen yogurt and toppings; cash registers are placed at the end of the toppings counter. Merchandise is also available at the stores.

SweetFrog offers fun and games for all ages. Children’s one-hour birthday parties for 12 guests come with a 12-ounce cup of frozen yogurt for each child along with a party bag of fun items. The birthday honoree gets a T-shirt and a small plush Scoop or Cookie.

Those who have less interest in celebrating than they do creating can opt for a sweetArt Paint Party. The 1.5-hour classes, led by an artist, come with a cup of sweetFrog frozen yogurt. Materials are included in the $25 cost.