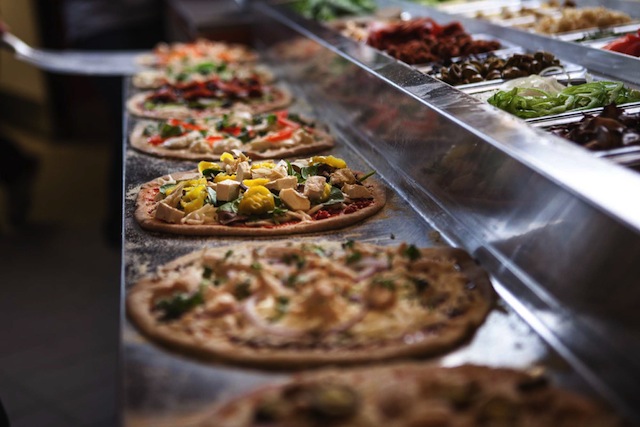 Your Pie Gains Ground As It Expands Beyond Southeast

Your Pie, which opened six new stores in the first half of 2016 to surpass 30 locations, had 49 new stores in development at the midway point of the year.

“Our increase in sales and immense growth over the last year shows us two things. One, the craft pizza business is set to explode. And two, Your Pie is quickly emerging as a strong player in this booming category,” founder Drew French said in a July 2016 press release. “There are a lot of pizza places out there these days, but thanks to our regionally sourced craft beer selection, unique toppings and true dedication to the art of pizza making, and commitment to community involvement, people realize we’re different – it’s really helped us come out on top in the past few years.”

The Athens, Georgia-based company is taking the brand outside the Southeast, including far-flung locations in California, Arizona and Colorado as well as markets that nudge just past the brand’s boundaries.

“People want fresh, they want customized and they want to control their experience. Our dedication to handcrafted food, a quality dining experience, and community improvement spoke for itself when we first opened in 2008, even though our concept was among the first to market,” French said. “People quickly realized that you really can have it all – convenience and a superior pizza. And that’s something that speaks to a lot of people – whether that’s in Georgia and Mississippi or Colorado and Texas.”

Your Pie conquered nine competitors at an October 2015 trade show competition in Chicago, hosted by Sofo Foods, to be named the best pizza in the Eastern U.S. The winning pizza was the Peach Prosciutto Pie, which featured local peaches.

Founders Drew and Natalie French moved on to the World Pizza Championships in Parma, Italy, in April 2016, competing in the Classico category in the Pizza for Two challenge.


Natalie’s family hails from the island of Ischia, off the coast of Naples, where the couple spent their honeymoon and Drew was inspired by the region’s brick pizza ovens and the earthy flavors and crisp dough that emerged.

Choice is Key Draw for Your Pie

Your Pie specializes in 10-inch personal pizzas freshly prepared in front of the customers and baked in traditional brick pizza ovens. About 60 percent of the pizzas are build-your-own versions designed by customers, but specialty pizzas are also available; they can be ordered as is or customized.

Vegetarian options are available, as well as vegan cheese, to further offer choices. Paninis, bread bowl salads and gelato are also on the menu, as well as craft beers from local breweries.

Your Pie’s Craft Pie Series, a seasonal offering that also features craft beers from local breweries, launched a Southern-inspired barbecue pizza in August 2016. The Pitmaster Pie’s limited-time run is from Aug. 17 through Oct. 25.

The pizza features pulled pork and roasted balsamic onions topped with coleslaw, barbecue sauce and a touch of ranch. A dessert addition to complement the Pitmaster Pie is Banana Pudding Gelato, made with ripened bananas and cinnamon rum.

In June, the Craft Pie Series introduced Peach Prosciutto Pie, paired with Italian Butter Pecan Gelato. The March Craft Pie was the spicy avocado-starring Fiesta Pie, along with the chocolate-and-chipotle Firecracker Gelato, which was sprinkled with Pop Rocks.

Your Pie One of 10 Best Franchise Deals

QSR Magazine named Your Pie as one of the 10 Best Franchise Deals for 2016. The site highlights the pairing of handcrafted pizza with paninis, salads and craft beers; strong corporate encouragement to localize the brand; satisfied franchisees; an average unit volume of about $800,000; and the founders’ participation on the U.S. Pizza Team at the 2016 World Pizza Championship in Parma, Italy. The Athens, Georgia-based company plans to double its locations by the end of the year.

Your Pie also debuted on Entrepreneur’s Franchise 500 list for 2016 with a ranking of No. 391. The company finished the previous year with 21 U.S. franchises and two company stores.

Your Pie Introduces Your Fest

Your Fest, which used the tagline “To End Childhood Hunger,” was held at the Terrapin Beer Co. in Athens. The event featured pizza, craft beer and live music, along with a craft pie cook-off featuring local chefs.

A portion of the proceeds went toward the Action Ministries’ Smart Lunch, Smart Kids program that ensures that children receiving free or reduced-price lunches in schools continue to have nutritious lunches in summer. For every Peach Prosciutto Pie sold at the event, Your Pie also donated one pizza to the charity.

French plans to make Your Fest an annual event and to eventually extend it to all Your Pie communities.

Next post: FDD Talk 2016: The i9 Sports Franchise Opportunity (Financial Performance Analysis, Estimated Costs, and Other Important Stuff You Need to Know)