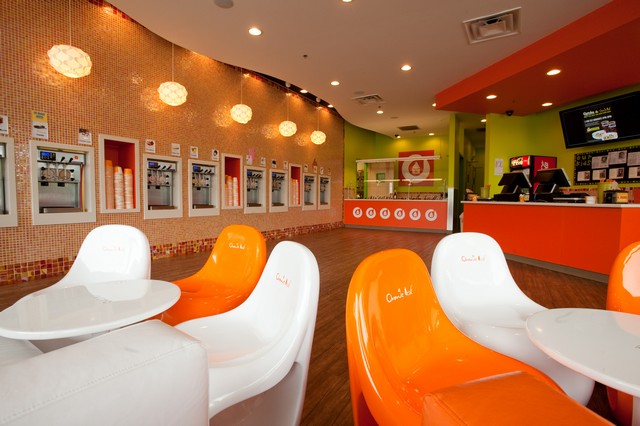 Orange Leaf Frozen Yogurt added even more orange in April 2016 when it introduced a new mascot, the talking Orange Unicorn.

The unicorn, which the company calls its “Spokes-thingie,” made its first appearances to promote the chain’s You Be You Day on April 26, when customers were invited to share unique, creative and unusual personality attributes and be rewarded with free frozen yogurt.

The customers were asked to mix and match frozen yogurt flavors and toppings in a beginner cup and take their creations to the registers, announce how they are different and unique, and enjoy their free frozen yogurt.

From Myth to (Augmented) Reality

The Orange Unicorn, whose backstory is that it was discovered on a farm, was further highlighted in May 2016 when the chain partnered with the Colorbug augmented reality app.

Customers can download the app from Google Play or the Apple App Store and then pick up a coloring page from an Orange Leaf store or download a page from orangeleafyogurt.com. After coloring the page, a customer can open the app, point the mobile device at the image and watch the Orange Unicorn become animated. Other interactions within the app are also available featuring the unicorn.

The app is developed by Dubai-based Pixelbug, and the Orange Unicorn coloring page is the company’s first U.S.-based AR project to be developed.

The Oklahoma City-based chain was founded in 2008 and started franchising in 2009. The brand has more than 300 stores, primarily in the western half of the United States, with more than 100 locations in the works.

The brightly decorated stores range from kiosks (50-500 square feet; common in malls and other areas with high foot traffic) to storefronts that range from 500 to 1,800 square feet and can be found in shopping centers.

Customers serve themselves their own frozen yogurt and toppings. Flavors and toppings vary, with permanent flavors joined by limited-time and seasonal offerings, as well as newly developed taste sensations.

Each store has 16 frozen-yogurt flavors, including classics, local favorites and creative concepts, and at least 30 toppings, from gummy worms to granola. Different locations offer different menus of flavors and toppings.

Along with the launch of the two new flavors, Orange Leaf sponsored a Creation Sensation Contest, asking customers to share imaginative ideas for recipes involving the flavors. The prize was a trip to an Orange Leaf store in Oklahoma City, Boston, Austin, San Antonio, Houston, Indianapolis, Cincinnati or Kansas City to help create a new frozen yogurt flavor for 2017.

Orange Leaf saw its highest ranking of 125th on Entrepreneur’s Franchise 500 list for 2016, just four years after debuting on the list with a rank of 359th. The chain quickly rose to No. 156 in 2013 and kept its high position.

Next post: FDD Talk 2016: The Your Pie Franchise Opportunity (Financial Performance Analysis, Estimated Costs, and Other Important Stuff You Need to Know)