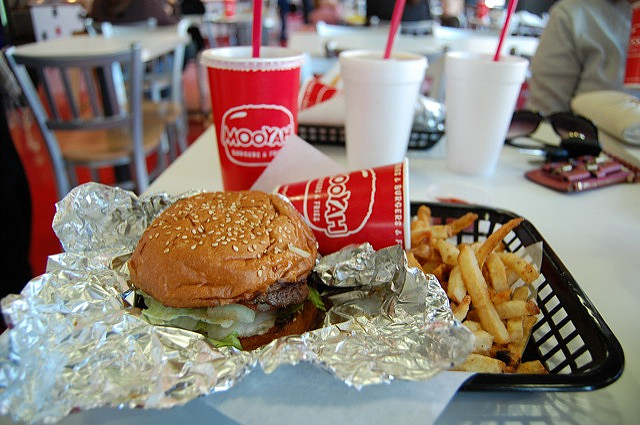 The two guys who came together to start MOOYAH were both restaurant veterans: Rich Hicks (founder of Tin Star) and Todd Istre (founder of Boudreaux’s Cajun Kitchen and Taters Kountry Kitchen). In 2007 they launched MOOYAH to compete in the better burger movement and started franchising that same year.

The chain has been growing steadily since its founding and now has 94 locations, four of which are company-owned and 14 of which are located outside the U.S. Headquartered in Plano TX, here’s how MOOYAH keeps the fries fried and the shakes shaken in the competitive fast-casual restaurant industry:

MOOYAH takes the multi-step approach to ordering. First you pick your patty:  MOOYAH, double, turkey patty, or black bean veggie patty. Then you decide what kind of bun you want on it (fresh-baked artisan white, multigrain wheat, or lettuce wrap). After that you select your extras, such as cheese (American, Swiss, cheddar, blue, pepperjack), applewood bacon, and avocado.

The menu is rounded out with fresh-cut French fries and sweet potato fries, a couple of salads, and ten different milkshakes made with real ice cream.

It seems like “better burger” chains have been springing up like weeds over the last decade. Most of them make some attempt at explaining what it is that actually sets them apart from the rest of the better burger segment.

The interesting thing about MOOYAH is that they make no attempt at explanation – there’s no heart-felt story from the founders about why they launched the business or anything like that. One franchisee is quoted on the website saying, “Everybody can sell a burger, but not everybody can sell the same experience we are able to at MOOYAH.” That’s fine, but there’s nothing to indicate what that experience might be.

If you read the reviews of this chain online, you’ll find it doesn’t really distinguish itself in the better burger movement.

The other strange thing is that the “in the news” page of the site doesn’t have anything recent on it, which is always a red flag. Surely the chain has been in the news since February 2013, right? Not according to its own website.

If you’re in the Dallas-Ft. Worth area, the company has a MOOYAH Cookout Trailer that can be used for special events.