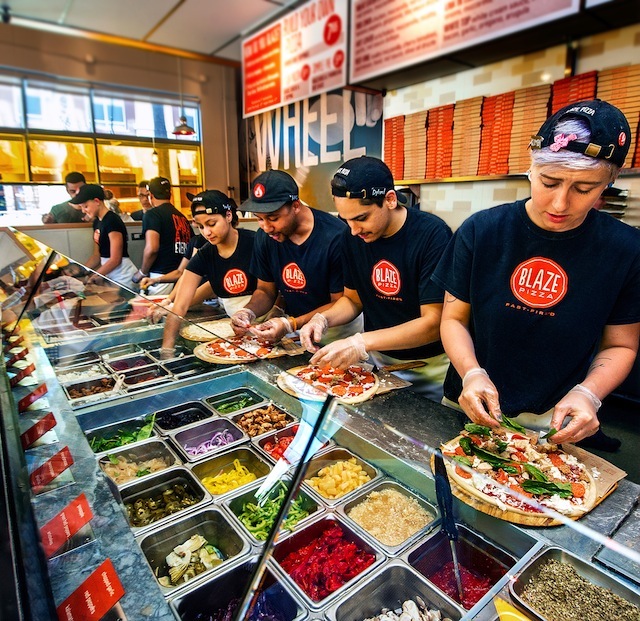 Blaze Pizza Turns Up the Heat

Blaze Pizza is looking to get bigger and bigger, both in coverage and sales. The fast-casual pizza restaurant chain opened its 100th location in December 2015 and now has more than 115 restaurants, with a goal of 500 by 2020.

The chain is working on increasing its footprint through partnerships with multi-unit franchisees. The company is focusing in particular on centers that get both daytime and nighttime traffic and prefers co-tenancy with other fast-casual brands, such as Panera Bread and Five Guys.

Blaze opened its first international location in Toronto, Ontario, in October 2015. Since then, a second Canadian restaurant has opened in Edmonton, Alberta, with a planned opening in Calgary, Alberta.

The brand’s five-year plan is to become the fifth-largest pizza chain in the United States, after Pizza Hut, Domino’s, Little Caesars and Papa John’s.

Chain Blazed Through 2015 to Become Fastest-Growing

The ranking also showed the rising popularity of fast-casual pizza chains, with three in the top five (Pieology was in fourth place with an increase of 67 percent). All provide unlimited toppings at affordable prices and prepare pizzas in just a few minutes.

NBA star LeBron James, an early investor in Blaze Pizza, came on in 2012 and has increased his presence with the company, even working behind the counter for a marketing campaign that gave him the name “Ron,” a new employee who knows nothing about basketball but plenty about Blaze Pizza.

Blaze Pizza was founded in Pasadena, California, in 2011 by Elise and Rick Wetzel of Wetzel’s Pretzels. Franchising began in 2012. The chain gets its name from its three-minute average cooktime.

The assembly-line format enables customers to customize a signature pizza with their own favorites or create their own unique pizzas, choosing from both classic ingredients like sausage and onions and less typical offerings like artichokes and roasted red peppers.

Along the way, they can select salads and desserts as well.

From crust to toppings, pizzas are prepared in front of customers before being speedily cooked over an open flame in an 800-degree oven, so busy diners can get served quickly and get on their way.

Locations vary widely, from urban storefronts to shopping centers to co-tenancies with other retail establishments, but they share a common theme in the modern design by award-winning MASS Architecture. Stark earthy materials like concrete and metal, along with bold, artistic graphics, give the restaurants a vibrant urban atmosphere.

Next post: FDD Talk 2016: The Nothing Bundt Cakes Franchise Opportunity (Financial Performance Analysis, Estimated Costs, and Other Important Stuff You Need to Know)