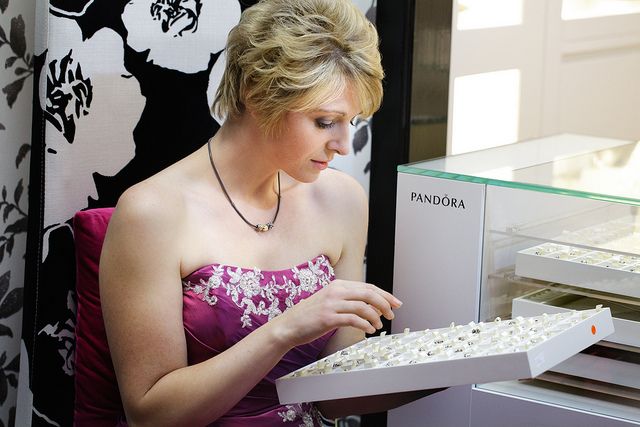 Pandora Looks to Shift from Products to Consumers

After some ups and downs over the past few years, Pandora Jewelry is looking ahead toward stability and expansion, as well as a shift in focus that will highlight the consumer rather than the product.

Pandora’s spring ad campaign launched in March 2016 to coincide with the launch of the spring jewelry collection. The campaign, titled “Unique As We Are,” featured six women wearing Pandora jewelry with neutral clothing hues and natural-looking makeup. The print campaign was shot by fashion photographer Cass Bird.

The campaign’s television commercial, directed by Martin Werner and featuring Danish actress Solbjorg Hojfeldt, followed the stories of individual women that eventually wove together as they gathered for a special event.

The goal of the campaign was to connect with today’s women, celebrating women as individuals as well as a collective. It focused on the global evolution of women and the Pandora brand.

The company expects to open 250 stores in 2016. That’s 150 fewer than the 400 that opened in 2015, but that number included 70 locations that were gained through assuming leases of women’s wear stores in Germany and converting them to Pandora boutiques.

In 2016, Pandora is focusing closer on the quality of new stores. Sixty percent of the 250 planned openings will be in Europe, 20 percent in the United States, and 20 percent in Asia.

Popularity Shifts from Charms to Rings

While the brand’s charms have been the largest driver of revenue for years, rings have risen quickly in popularity around the world. Revenue from rings rose 73 percent in 2015.

The stackable rings Pandora introduced in 2015 were immensely popular, making up 20 percent of total sales for the company.

In its annual report, Pandora Jewelry recorded production of more than 100 million pieces of jewelry in 2015. In addition to rings and charms, the company produces bracelets, earrings, necklaces and pendants.

Pandora was founded in 1982 by Danish goldsmith Per Enevoldsen and his then-wife, Winnie Enevoldsen, as a family-owned and operated jewelry store in Copenhagen. The couple imported jewelry from Thailand and sold to wholesale consumers.

In 1989, they hired jewelry designers and started their own production site in Thailand. Producing the jewelry at low cost meant that the company could provide affordable hand-finished jewelry to mainstream consumers.

Axcel, a Danish private equity group, purchased a 60 percent stake in Pandora in 2008. Pandora opened concept stores around the world before it started franchising in Australia in 2009. The company went public in 2010.

Pandora, still headquartered in Copenhagen, produces its products in its production site in Thailand and sells jewelry in more than 90 countries. Pandora now owns four manufacturing facilities in Thailand that employ more than 3,600 employees.

Retail formats include concept stores – Pandora-only stores carrying complete lines of Pandora products with branded storefronts and displays – and shop-in-shop facilities, which are clearly defined spaces in stores that are dedicated to Pandora and carry a large assortment of its products.

Pandora, Dress for Success Team Up

Pandora Jewelry announced in February 2016 a partnership with Dress for Success, a global not-for-profit organization that helps supply women in need with professional clothing and accessories, a support network, and development tools geared toward helping women thrive in their careers and personal lives.

As the organization’s official jewelry partner, Pandora committed to a $500,000 donation in 2016 as well as donating Pandora jewelry for Dress for Success boutiques in North America.