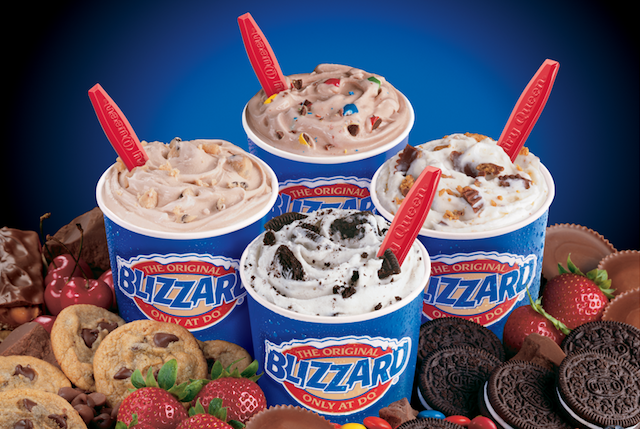 Many DQ Treat stores are in shopping malls, on the street, and in airports, where customers can grab a quick DQ soft-serve cone, milkshake or Blizzard Treat between shopping, while walking, or on flight layovers.

It All Started With the Recipe

DQ’s soft-serve ice cream treat predated the actual stores. John Fremont (J.F.) McCullough (known as Grandpa McCullough) and his son, Alex, developed the recipe in 1938 and convinced their friend Sheb Noble to sell the treat at his ice-cream store in Kankakee, Illinois. It was so popular that the three men opened up the first Dairy Queen store in 1940 in Joliet, Illinois.

Grandpa McCullough called the store Dairy Queen because he saw his soft serve as a queen among dairy products, offering an exceptionally fresh, wholesome treat.

DQ, which celebrated its 75th anniversary in 2015, is now based in Edina, Minnesota, a Minneapolis suburb. The chain is owned by International Dairy Queen and franchised in the U.S. by American Dairy Queen and has more than 6,600 DQ locations in the U.S., Canada and 25 other countries.


DQ/Orange Julius restaurants serve the full menu of DQ treats as well as Orange Julius beverages. The restaurants can be free-standing units, mall locations, or housed in end caps of strips centers, dual-use buildings, and other venues, including shopping malls. Mall stores are strong performers in food courts or kiosks.

Dairy Queen is still iconic for its frozen treats, even while burgers, chicken baskets and onion rings have made it possible for people to have a whole meal at DQ. In addition to the soft-serve ice cream treat, sundaes and malts, some of the chilly delicacies at DQ Treat Centers include the Peanut Buster Parfait, Dilly Bar, MooLatte and Blizzard, as well as the Orange Julius line, which adds fruity sweetness and some lower-calorie choices for customers.

Orange Julius was placed on DQ menus in 2012, but the Orange Julius chain was actually purchased by International Dairy Queen in 1987, so the relationship has existed for some time on the corporate level. In addition to stand-alone locations and inclusion in DQ menus, some Orange Julius locations are paired side by side with Dairy Queens with separate storefronts.