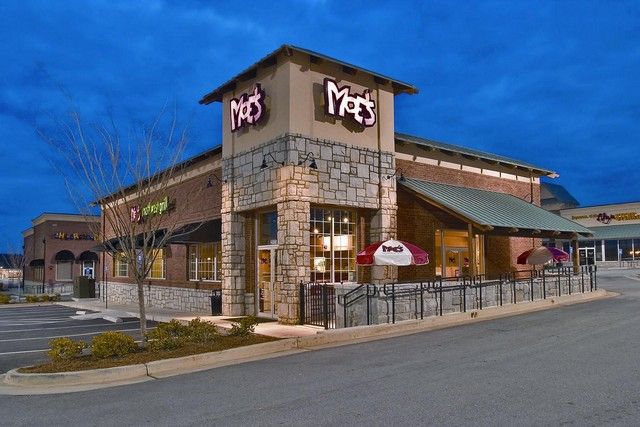 Moe’s Southwest Grill got its start back in December 2000 in Atlanta and started franchising in 2001. It’s a fast-casual chain that brings freshly-made southwest fare to consumers in a hip atmosphere.

The number of locations has jumped in recent years up to more than 640 (of which 5 are company-owned and two are outside the U.S.).

The southwestern fare at Moe’s includes all the staples you’d expect, including burritos, tacos, nachos, quesadillas, and salads. Everything is made from more than 20 fresh ingredients such as all-natural chicken, grass-fed steak, and organic tofu.

The food is made to order right before your very eyes and every order comes with free chips and salsa.

Can you tell the chain is a big fan of Seinfeld and Chevy Chase?

There’s always rockin’ music playing at Moe’s, and the selection of tunes has a method to its madness. The chain’s Dearly Departed Playlist features classic songs from musicians who have passed on. Examples include Substitute by the Who, Fire on the Mountain by the Grateful Dead, Revival by the Allman Brothers Band, Mojo Queen by Ike and Tina Turner, Gimme Some Lovin’ by the Spencer Davis Group, Stop Breaking Down by White Stripes, and Rhumba Girl by Nicolette Larson.

The Harris Poll EquiTrend annual study benchmarks brand strength in all kinds of categories, one of which is fast-casual Mexican restaurants. Chipotle held the number one ranking on this list for three years running, from 2013-2015. The fact that Chipotle has certainly had its media troubles lately might explain why Moe’s took over that number one slot as of 2016. It just goes to show how nasty E. coli outbreaks can be – both to consumers and brands.