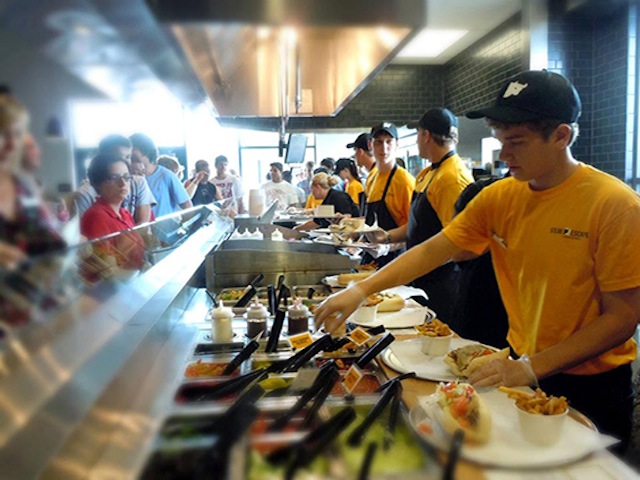 Ken Smith and Mark Turner grew up on the eastern seaboard and were self-admitted Philly-style cheesesteak addicts. They were shocked and dismayed that most of the rest of the world had no idea what a cheesesteak even was. They took it upon themselves to start their own cheesesteak shop, which they did in Columbus, Ohio, in the city’s northern area known as The French Market.

Their first location in 1982 was only 209 square feet – little more than a closet, but it was a start. People loved their sandwiches and they quickly became a sales leader in the neighborhood. They franchised the concept beginning in 1983, mostly in shopping mall sites, college campuses, airports, and sports arenas.

The number of locations has been in steep decline for at least the last 10 years. In 2006 there were 132, all domestic. Now there are only about 59, four of which are company-owned and seven of which are located outside the U.S.

The Struggle to Survive

Any chain with a substantial presence in shopping malls has had a tough go of it after 9/11, and rents in malls can eat up nearly a third of restaurants’ sales. But the chain is making the effort to turn things around, beginning with establishing stand-alone restaurants among its store models. There’s also a big re-branding effort underway that includes a whole new menu.

The old menu included 7 signature sandwiches – Grand Escape (cheesesteak), Wild West BBQ, French Onion, Grand Chicken, Cajun Chicken, Buffalo Chicken, and Turkey Club. Any sandwich can be had as a salad, wrap, or stuffed/smashed potato. The old menu, still available at most locations, is rounded out with a selection of burgers, salads, and smashed potatoes.

As before, any sandwich can be had as a salad, wrap, or stuffed/smashed potato. The big new addition are the five different kinds of French fries now available: Totally Loaded Fries, Buffalo Chicken Fries, Sriracha Fries, Cajun Bleu Fries, and Naked Fries.

The chain is also pushing for international expansion. It already has locations in Saudi Arabia, Mexico, Pakistan, and the Sultanate of Oman. Last year it inked deals to start opening locations in Russia, Eastern Europe, Ghana, and Lebanon.

Next post: How Restaurants Can Capitalize on the Sports Craze (Advice from Ron Lynch, President of Tilted Kilt)