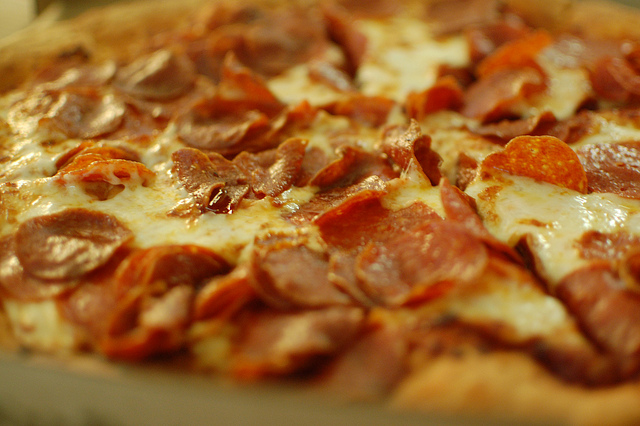 Pizza Hut may be the leader in its market, but it’s been losing ground to competitors. Domino’s, Papa Murphy’s, Papa John’s and Little Caesars saw sales rise in 2014 while Pizza Hut’s sales dropped slightly, according to Bloomberg.

Parent company Yum! Brands seeks to reverse that decline with numerous innovations, such as hotter ovens and snazzier interiors equipped with bar seating. The ideas are being tested in Texas.

Pizza Hut plans to remodel 700 restaurants each year through 2022 to get the new look, and 2016 should see 1,000 new ovens rolled out around the country.

In Lantana, Texas, General Manager Terri Smith told Bloomberg in January 2016, the hotter oven is drawing good lunch crowds, and 90 percent of her customers are ordering the chain’s new $5 lunch special, which consists of a 9-inch, three-topping pizza and a beverage. The crowds are also enjoying the open kitchen, which enables customers to watch the pizza-making process from start to finish.

Some of the brand’s competitors have been more successful in developing pizzas that customers want, with more creative toppings. And others are creeping closer in sales; Domino’s sales were $4.1 billion in 2014 while Pizza Hut’s were $5.5 billion.

Pizza Hut, whose first location opened in 1958, started when brothers Frank and Dan Carney borrowed $600 from their mother to start a pizzeria in Wichita, Kansas. The chain is now owned by Yum! Brands, which also owns KFC and Taco Bell.

Pizza Hut set a Guinness World Record in May 2016 when it delivered pizza to the top of Tanzania’s Mount Kilimanjaro, the tallest mountain in Africa at 19,341 feet. The climb, which began May 5, culminated May 8 to set a world record for the highest altitude pizza delivery on land. (Pizza Hut already delivered pizza to the International Space Station in 2001).

The pizza was baked in Dar Es Salaam, the largest city in Tanzania, and transported by plane and car and within insulated, battery-powered backpacks worn by five guides that helped keep it warm. The pizza traveled about 745 kilometers.

The feat wasn’t just about the world record. It also made Tanzania the 100th country in which Pizza Hut has operated.

Bacon Back in Pizza Hut Crust

Many would say bacon on top of a pizza makes it better. How about bacon baked right into the crust?

Pizza Hut launched Bacon Stuffed Crust Pizza in May 2016 for a limited time. The crust, an update from a 2014 version, is filled with pieces of Applewood smoked bacon along with mozzarella, white cheddar and provolone cheese.

Saturday Night Live’s Bobby Moynihan helped push the pizza chain’s new pizza. He was chosen for his humor and his love of bacon.