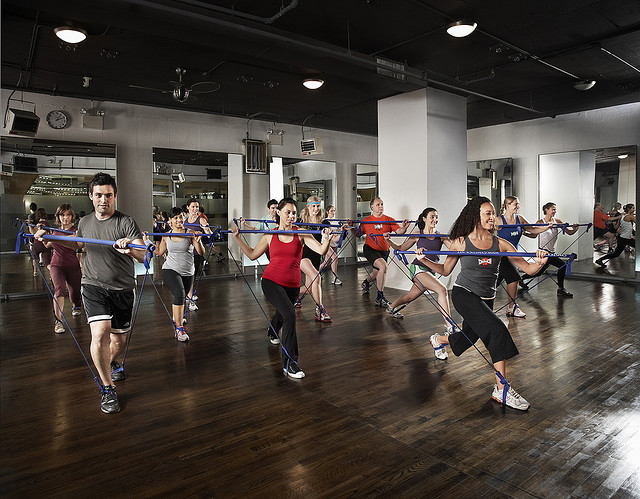 Crunch aspires to an open-minded, no-judgment approach to fitness in a diverse community of members with a wide range of goals. It’s no surprise, then, that the chain has a wide range of classes and keeps adding more.

Crunch, the first gym to offer Zumba workouts back in 1998, targets young adults and follows fitness trends. The fitness chain’s classes include standard programs such as cardio, stretch and sculpt as well as specialty classes as diverse as firefighter workouts and karaoke cycling. More than 40 classes are listed on the chain’s website in several different fitness areas.

The classes have been popular enough that they sparked an online workout platform called CrunchLive.com, which was launched in 2013; the platform provides unlimited access to more than 75 online workouts designed around the fitness chain’s most popular classes.

Crunch partnered with Fitbit in January 2016 to introduce a new class, Acceleration Powered by Fitbit, which focuses on the activity metrics that can be tracked with Fitbit devices. Class participants can check their devices to see how many calories they have burned in the high-intensity interval workouts and how many steps they have achieved, and they can follow their progress in the Fitbit app.

Edgy, Urban Vibe With No Judgments

Crunch was founded in 1989 in New York City’s East Village by Doug Levine, a former stockbroker who sought edgy innovation with an urban vibe. Its “No Judgments” tagline was added in 1995, the same year Crunch produced a series of workout videos.

The chain is currently co-owned by New Evolution Ventures and private-equity firm Angelo Gordon, and is headquartered in New York City. It has more than 150 locations in 18 U.S. states and the District of Columbia, as well as locations in Puerto Rico and Australia, and serves more than 400,000 members.

Facilities are modern and club-like, ranging from 16,000 to 25,000 square feet, with most between 17,000 to 20,000 square feet. At least 125 parking spots must be available. Members can purchase branded products such as clothing and accessories, among other merchandise.

In addition to individual workouts and classes that utilize cardio and strength-focused equipment, personal training is also available. Members can work one on one with trainers or participate in small groups. Tools used in these sessions may include kettlebells, TRX Suspension Straps and Bulgarian Bags, among others. Members can even work out in bridal boot camps.

Base access, at a price of $9.95 a month, entitles members to use all exercise equipment and access the company’s online fitness and nutrition program. Peak membership adds free tanning, HydroMassage and access to other Crunch Essential locations, and Peak Plus adds guest access and RIDE classes.

Chicago Bulls center Joakim Noah announced in February 2015 that he would open five Crunch locations. Noah is among a number of NBA players working with BDA Sports Management to helm Crunch locations in their teams’ cities.

Next post: FDD Talk 2016: The Music Go Round Franchise Opportunity (Financial Performance Analysis, Estimated Costs, and Other Important Stuff You Need to Know)