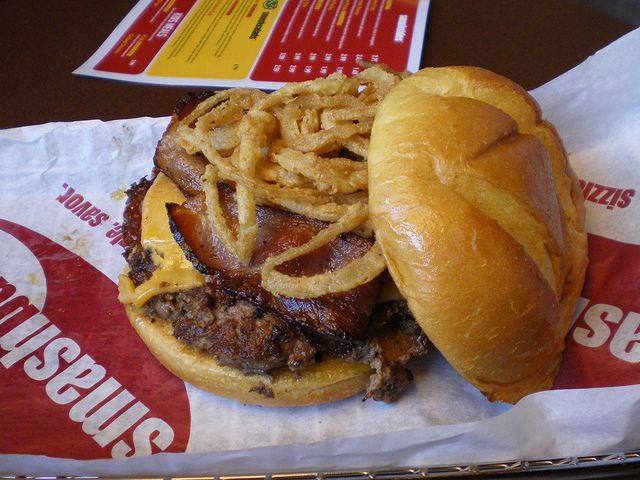 Tom Ryan had spent more than 20 years working in the restaurant business for such venerable brands as McDonald’s, Pizza Hut, Quizno’s, and Long John Silver when he finally decided to set out on his own in Denver, Colorado, with a concept he called Smashburger in 2007.

It’s a better-burger effort whose name comes from the way the burgers are prepared – by taking a ball of ground beef and “smashing” it onto the grill. With its tagline of Smashed Fresh, Served Delicious, the chain’s certified Angus beef burgers are never frozen and are made to order for each customer.

The chain has grown rapidly since its founding and now boasts more than 343 locations in 32 states and a few scattered around the world in seven different countries. A little more than half the locations are company-owned.

Here’s how Smashburger is making a hit in the highly competitive better-burger segment:

Each patty is smashed, seasoned, and seared to order. From there it’s all about choices, from different kinds of buns to several different cheeses, to all the fresh produce that can be added to make the burger you want.

There is a vegetarian black bean burger (not vegan, as it contains both eggs and cheese), and gluten-free buns are available as well.

There are also grilled or crispy chicken sandwiches and fresh salads.

The chain has come up with a unique way to prepare burgers to order as quickly as possible. Here’s how it goes:

Unsalted butter is brushed onto a 385-degree grill to keep the burger from sticking. Then the unshaped ball of beef is placed on the grill and a special smasher (it actually looks a little bit like an iron) is used to smash the beef down against the grill for exactly 10 seconds, which sears the bottom into a kind of caramelized shell that seals in the juices. After that, the patty is sprinkled with salt, pepper, garlic, and an array of secret spices. When the grease begins to bubble (sort of like a pancake), it’s time to flip it.

The burger is ready after just two minutes and forty-five seconds.

How It Stacks Up

Comparisons are inevitable in the business, and Smashburger’s main competitor is Five Guys Burgers and Fries.

Smashburger is setting itself apart with a slightly more upscale and adventurous approach with flavors. You order and pay, then wait at your table for a server to bring your food, so it’s a hybrid of counter and table service. The burgers (on the small side), are served open-face, so you get the full experience of seeing all your toppings, which tend to look great.

Five Guys, on the other hand, doesn’t go for that upscale look or feel. They’re taking the other approach – just serving up big, no-fuss quality burgers in a counter-only service model. The burgers are huge – and double-patties are standard. It’s not the gourmet approach, but it still works well.

It really comes down to what a consumer wants. They’re both great.