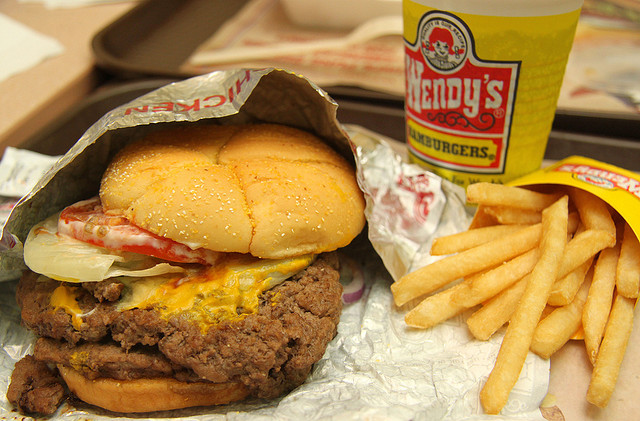 In 2008, the company merged with Triarc, the parent company of Arby’s, after rejecting two buyout offers. After the merger, Triarc became known as Wendy’s/Arby’s Group, but after the spin-off of the Arby’s brand in 2011, it became called The Wendy’s Company. It is a publicly traded company (NASDAQ: WEN).

There are about 6,500 Wendy’s restaurants in the United States and 28 other countries. Nearly 85 percent of the restaurants are franchised, and most restaurants (77 percent) are located in North America.

Four for $4 Heats up Burger Wars

In late 2015, Wendy’s made a significant volley in the burger price wars by introducing its “4 for $4 deal” that includes a junior bacon cheeseburger, four chicken nuggets, small fries and a drink, all for $4. The deal is promoted as being for a limited time, but a date for it to end has not been set. The Wendy’s website explains that consumer response will determine how long the promotion lasts.

Rebranded stores feature a sleeker, more contemporary appearance with natural earth tones accented by a towering red element reaching out of a glass enclosure. Stores and menu items also feature a logo that was redesigned in 2013, the first logo change in 30 years.

In early 2016, Wendy’s announced that its North American locations will transition into the complete use of cage-free eggs for its breakfast menu by 2020. Since 2001, the company has utilized an animal welfare program that covers all meat suppliers, and the company has pledged to eliminate gestation stalls from its pork supply chain by 2022.

Last year, Wendy’s, which offered salad bars in the early years of its existence, promoted its fresh salad ingredients in a video series on YouTube.

“Our kitchens are stocked throughout the week with fresh produce so we can provide consumers farm-fresh flavor every day,” said Brandon Solano, Wendy’s chief marketing officer, in a press release. “While others may use bagged lettuce and factory-cooked bacon and chicken, we don’t cut corners.”