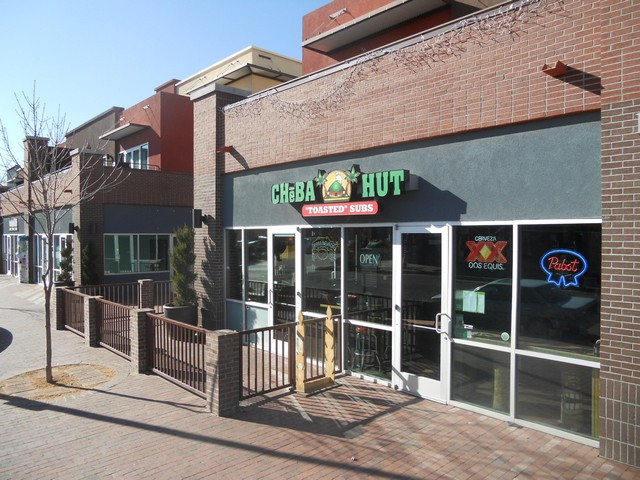 Scott Jennings graduated from Arizona State University wanting to start his own restaurant with a more laid-back culture that didn’t feel corporate and went against the grain of “establishment” chains. Anyone who has ever experienced marijuana-induced “munchies” will instantly appreciate the theme of Cheba Hut with its focus on “toasted” subs.

Jennings had worked previously as a late-night food delivery driver, and he couldn’t help but notice how late-night options were limited, as well as how often he was delivering to people who were partaking in marijuana.

Started in 1998 as a kind of parody on marijuana culture, the original gimmick has stuck and struck a chord with those looking for a connection between great-tasting food and this very specific counter-culture. The name’s phonetic pronunciation (cheeba) approximates the Spanish pronunciation of Chiba, a slang term for highly potent Colombian marijuana.

So this is the melding of a sub shop with cannabis culture, which is very clear when you visit the company’s website and see its mascot, a clearly very stoned bird named Flip who is always smoking a joint, not to mention the chain’s iconic use of the Volkswagen Campervan.

With 17 locations in six states (WI, CO, NM, AZ, OR, and CA), the concept began franchising in 2002. Here’s how Cheba Hut helps customers stave off the munchies in the sandwich segment:

There’s no doubt that catering to cannabis culture has its limitations. The theme makes it hard not only to find good franchisees, but also high-quality locations willing to take on the theme. Then again, given the fact that marijuana is becoming increasingly legal, this gimmick may prove to be a key driver of future growth.

After all, medical marijuana has been legalized in 23 states and the nation’s capital, with no fewer than five of those states also permitting recreational use. These are figures that are poised to continue rising as more states follow suit, with at least six more slated to consider legalization in 2016.

Staving off the munchies at Cheba Hut includes a menu composed of 30 different signature subs, a range of Rice Krispy treats, salads, and a selection of other munchies. Many locations also offer craft beers. Vegetarian options are indicated with a marijuana leaf logo.

The names of the different subs are, of course, different varieties of pot. But the focus is on the chain’s carefully developed flavor profiles, and the employees’ product knowledge so they can make serious recommendations to customers.