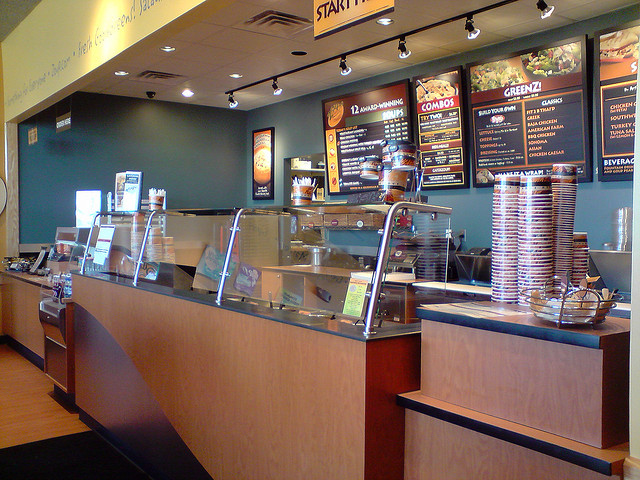 Zoup! is a fast-casual restaurant chain that specializes in soups. The company operates a network of more than 80 restaurants in the U.S. and Canada, and offers franchise opportunities to qualified candidates.

The first Zoup! opened in suburban Detroit in 1998. Over the following five years, the founder, Eric Ersher, opened five more Detroit-area locations, before franchising the concept in 2003. The privately-held company, which is headquartered in Southfield, Mich., has aimed to avoid aggressive and fast growth.

In Entrepreneur’s 2016 Franchise 500 list of top franchisors, Zoup! ranks at #314. For 13 years in a row, Detroit HOUR Magazine readers have given Zoup! the best “Best Soup” in Detroit nod. Restaurant Business magazine put Zoup! at #35 in its 2015 ranking of the fastest-growing small chains in the U.S.

Throughout January 2016, Zoup! locations participated in National Soup Month to help fight hunger. Customers who donated $3 to Feeding America or Breakfast Club of Canada received a voucher for a free cup of soup on a future visit.

Company founder Eric Ersher had a spice business and then a wholesale soup business before launching Zoup! He told an interviewer that he discovered in his previous jobs that good soup is hard to find and that people connect soup with the idea of comfort.

Each Zoup! restaurant has 12 soup wells with 100 different soups rotating through the stores. All soups are cooked in small batches at a central location using Zoup!’s special cook-chill process. The soups are then delivered to the stores where they are brought back to serving temperature.

Zoup! soup is available in 8-ounce cups, 12-ounce bowls, quarts or gallon, and prices range from about $3.95 a cup to about $6.95 a bowl and to about $45 a gallon. About 50 percent of each restaurant’s sales are takeout orders, and Zoup! also offers catering service for parties of 10 or more.

Zoup’s “Try Two!” promotion offers customers the option of selecting two of three offerings—a cup of soup, a half salad, or half sandwich – for about $7. (Prices may vary)

All soups are served with a “hunk” of sourdough, French or multigrain bread, all of which are baked on site.

A typical Zoup! location is about 2,000 square feet with seating for 45–50 people. Most restaurants are located in in-line strip-center locations, with a few smaller stores located inside malls or office buildings.

Zoup! made a promotional video with Larry Thomas, the actor who played the enduring “Soup Nazi” character on the classic Jerry Seinfeld TV series, “Seinfeld.” The two-minute video shows Thomas pointing at the camera saying, “Zoup! For you!”