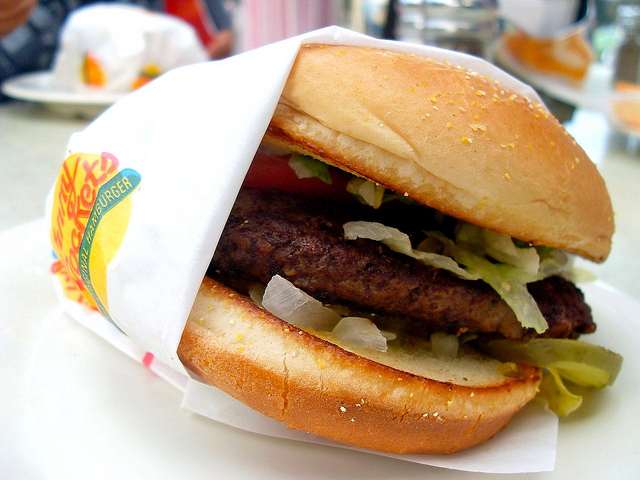 Johnny Rockets was first opened on Melrose Avenue in Los Angeles, CA by founder Ronn Teitelbaum (an award-winning men’s fashion retailer) back in 1986, and he started franchising the concept in 1987. He was aiming to recreate the feel of the 1940s and 1950s malt shops and diners he enjoyed as a child. The name originated by combining the timeless Johnny Appleseed story with the classic Oldsmobile Rocket 88.

One of the chain’s trademarks is making a smiley face with ketchup on a paper plate carrying French fries.

Pretty much the entire look and feel of the place is based on a real restaurant in Los Angeles called The Apple Pan, which started back in 1947 and is still operating today.

In 2007, the chain was acquired by RedZone Capital, the private equity firm of Washington Redskins football franchise owner Daniel Snyder, but was then sold to Sun Capital Partners in 2013.

With more than 344 locations in the U.S., Canada, and around the world, here’s how Johnny Rockets keeps things hopping in the restaurant industry:

While it was owned by RedZone Capital, Johnny Rockets food stands started popping up in sports stadiums, including Yankee Stadium and FedEx Field (where the Redskins play). In 2008, Six Flags turned its sit-down Adirondack Grill restaurant into a Johnny Rockets. That same year, Johnny Rockets opened in Camp Pendleton, the largest Marine Corps training facility on the West Coast.

More Than a Fast-Food Burger Joint

These are premium burgers – bigger and more expensive than most burger places, and you’re getting a full Americana experience when you eat there, which is probably why they’re so popular overseas.

As you can see from the interesting locations described above, Johnny Rockets takes an extremely flexible approach so that it can work almost anywhere. It’s now starting to roll out a brand new concept, Johnny’s Burger Factory, aimed squarely at capturing the Millennial segment with faster service and customization, as well as new technologies that are both consumer facing (touch-screen ordering kiosks) and in the kitchen (clamshell cooking systems) to speed things up.


This is in addition to its launching last year of the Johnny Rockets Route 66 concept with four formats, including a drive-thru, a drive-in, a food truck, and a movie theater pop-up.