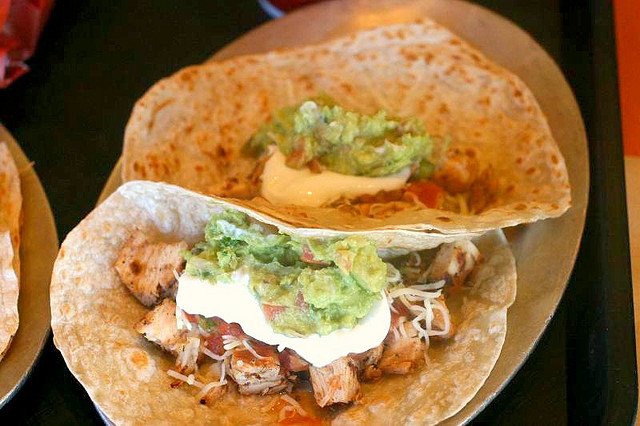 This Franchise Chatter guide on the Pancheros Mexican Grill menu was written by Sherman Morrison.

When it comes to fast-casual Tex Mex restaurants, there’s one that many people haven’t yet heard of, even though it was founded in the early 1990s, just like Chipotle and Qdoba. I’m talking about Pancheros Mexican Grill, and although there are only about 68 locations at present, that’s something president and CEO Rodney Anderson wants to remedy.

It was back in 1992 when Anderson, with a freshly-minted MBA from the University of Chicago, was able to open the first Pancheros using money he made on the stock market. Taking a cue from Jimmy John’s, he carefully chose his first site in Iowa City, right next to the University of Iowa campus. Finding success with that formula, the next 10 locations were all similarly situated in Midwestern college towns.

The big question for a chain like Pancheros is how will it distinguish itself from its top rivals? That’s a question I’ll answer below as I evaluate the chain’s menu. Because Pancheros menu prices can vary by location, I’ll be focusing on the quality of the food and eating experience.

The expansion plans, by the way, don’t appear to be working out as Anderson would like them to. At the start of 2014, Pancheros had 65 locations, with stated plans of opening 16 new stores that year, and opening something like 70 by 2020. Given that the chain’s number of total locations now stands at just 68, things are obviously not quite going according to plan.

Similar to both Chipotle and Qdoba, Pancheros features a surprisingly simple menu, with its main categories being burritos, burrito bowls, tacos, quesadillas, salads, and chips. Also similar to its rivals, it focuses on fresh, high-quality ingredients, although it’s not quite as focused on food activism as Chipotle.

You begin your eating experience at Pancheros by deciding what your protein will be, which include the following choices:


From there you can choose any of the following additions, which are all made fresh in the store each day:

So how does a chain like Pancheros try to go up against a giant like Chipotle? In 1998 Pancheros chose one of its main distinguishing features, which was to make its tortillas fresh on-site at each location. Sounds crazy, but that’s exactly what they do.

They use a fascinating contraption from DoughPro called the DP2000 (The TortillaPro). It presses a ball of tortilla dough into the flat tortilla shape, and from there it’s slapped onto a grill for a few seconds before it becomes part of your meal. They’ve got this down to a science so that your tortilla is literally made a few seconds before the ingredients you choose are placed inside of it. Obviously, it doesn’t get any fresher than that!

So part of what Pancheros is trying to do is to convince you that the tortilla really does matter. If you go back and read what I’ve written about Qdoba and Chipotle, you’ll notice that the tortillas rarely get mentioned, unless they come out damp and sticky (which is Qdoba’s problem). They don’t seem to add much to the burrito experience except as a wrapping for what’s inside.

But according to Pancheros’ website, “Make no mistake, it’s all about the tortilla. Each one is made and pressed fresh on the spot. No two are the same. Like snowflakes, only prettier, tastier, and much better suited for bundling up beans and salsa. Our tortillas won’t let you down. Ever. Because they’re fresh, they’re structurally sound. In other words, it’s not gonna fall apart, re-routing a big glob of guac to your chinos. Your mouth wins. Your pants win. Everybody wins.”

That’s a lot of pressure to be placing on something that most chains don’t pay much attention to at all. We’ll see what pans out as I review each of the Pancheros menu categories below.

Is it all about the tortilla, as Pancheros claims? No, it’s not, but their tortillas are superior. Why would you eat any tortilla pulled out of a plastic bag when you can have one made fresh right in front of your eyes? And it does make a difference.

Feel free to try this yourself: Get a tortilla from a place that doesn’t make them fresh, and then go get one freshly made at Pancheros. If you take a bite of each, I can pretty much guarantee you that only one will be so good that you’d eat it plain all by itself and enjoy it – the Pancheros tortilla. They’re that good.

So while a fresh-made tortilla does make a significant difference, once you’ve got all the ingredients inside of it, the tortilla still becomes little more than a wrapping, so it’s not all about the tortilla. It’s also worth mentioning that the dough is made fresh each day as well.

The other thing that Pancheros has seized upon to set it apart from other burrito chains is Bob, as in Bob the Tool. This is a short little plastic spatula-like tool that is used to actually mix your ingredients up on the tortilla before it gets wrapped.

Pancheros makes a really big deal about Bob the Tool on its website: “With Bob’s help, we’ve torn down the walls that once stood between meat and rice, between beans and salsa. Ingredients can now co-conspire as one. Bob has single-handedly revolutionized burrito building, and eating, forever.”

Again, that’s a lot of pressure on little ol’ Bob – revolutionized burritos forever? Ask yourself this: Have you ever eaten a burrito and said to yourself, “Gee, I sure wish these ingredients were mixed up more.” I’m guessing the answer to that question is no, which gives you the real scoop on Bob’s actual effect on burritos, which is zilch.

However, Pancheros has used it as a great marketing gimmick and a way to set itself apart from the competition, so touché! If Chipotle layers on its ingredients and you took a cross-section of the burrito, then you might find that it would be possible to take a bit that had more of one layer of ingredients than another, but it’s really unlikely.

Other than what I’ve mentioned, however, there’s nothing that really sets a Pancheros burrito apart from a Chipotle burrito, except maybe the size. Pancheros makes massive burritos that are routinely difficult for one person to finish. As with Chipotle, the chicken is clearly the most popular meat choice, the steak is decent, but in my mind it’s the carnitas that deserve more attention.

As with other chains, Pancheros has done the politically correct thing by offering its burritos without the tortilla, instead placing all the ingredients into a bowl for those who are either watching their carbs or who must suffer on a gluten-free diet.

While I can appreciate the dilemma that both (growing) segments face, I’ll never have a burrito without the tortilla. Why? Because without the tortilla it’s not a burrito! It’s just a salad, right? If you look at the pictures on the Pancheros website, it’s clear that the only difference is that the salad has a whole lot more lettuce in it.

So tell me this – if you order a burrito bowl with extra lettuce, then it’s really a salad, isn’t it? That’s why I’ve combined burrito bowls and salads into the same category, because the only difference that I can see is how much lettuce is in the bowl. For those of you who order a burrito bowl instead of a burrito, stop fooling yourself. It’s a salad.

Unlike chains that offer crispy or soft, Pancheros only does pairs of soft tacos, which makes sense since they make their tortillas fresh, and a soft taco is just a small tortilla. So in this case, what is a taco and why would you want one? This is a good question that in my mind doesn’t have a good answer.

You’re getting all the same ingredients as you might get in a burrito, but you’re putting them onto something substantially smaller and that doesn’t even close the whole way to hold them together. Can you say disaster? I’m just not a fan of tacos for those reasons.

I do, however, love a good quesadilla, and here’s where Pancheros really delivers in my mind. Burritos pretty much have to be manually handled to eat, and sometimes I really just want to use a knife and fork when I eat, so the quesadilla becomes my Tex Mex container of choice. Plus, I like having melted cheese involved, and the quesadilla is the only way to really make that happen. And then of course, I would want to add a healthy dose of queso over the top of the quesadilla. Yum!

Pancheros serves blue corn chips, which I always find a nice alternative to yellow. They’re not overly salty, which is nice. But here’s where we can talk about some of the sauces and salsas. One of the problems with Pancheros is that none of their salsas have much kick at all to them. This is a real turnoff for the people who do want some zing in their salsa. You’ll have to add your own hot sauce if you want it.

Then there’s the queso. I love melted cheese, but the Pancheros queso is way too runny. I want my cheese sauce to be thick. It’s also much saltier than it needs to be. This is one item where Qdoba has the clear edge over the others.

As for the guacamole, it’s on par with Chipotle, and slightly better than Qdoba’s bland mixture. But still, it’s nothing to get all that excited about.

Pancheros has some challenges to overcome. The main one is that when you’re standing there ordering, it’s not at all clear which additions are free and which will cost you, so the price of your final item might be quite a bit more than you bargained for.

Qdoba fixed this problem by switching up its pricing structure so that all extras are free, including the guacamole, whereas at Chipotle you still pay a premium for it. Pancheros should take a cue from Qdoba in this regard. After all, few things are more disappointing that paying more for fast food than you think you will.

In the final analysis, I think Chipotle edges out Pancheros slightly in quality. Pancheros talks about using the “freshest” ingredients, but they clearly don’t pursue it with the same fanaticism of Chipotle, and it shows in the ultimate taste test. That’s why when comparing Pancheros, Qdoba, and Chipotle, the only way it can really come out is Chipotle #1, Pancheros #2 (sorry, Bob), and Qdoba #3.

But the real question I want to raise with all this fuss over fast-casual Tex Mex is this: Why hasn’t anyone bothered to come out with a good cheese enchilada? I’m no fan of corn, whether fresh or in a crispy shell or chip, but the one time I do go for it is with the corn tortilla of the cheese enchilada. Next to the quesadilla, it’s my favorite thing to order at full-service Mexican restaurants.

I guess the fast-casual chains just haven’t figured out how to make it fast to fit the equation. And you’d have to get the enchilada sauce just right, which can be a challenge.