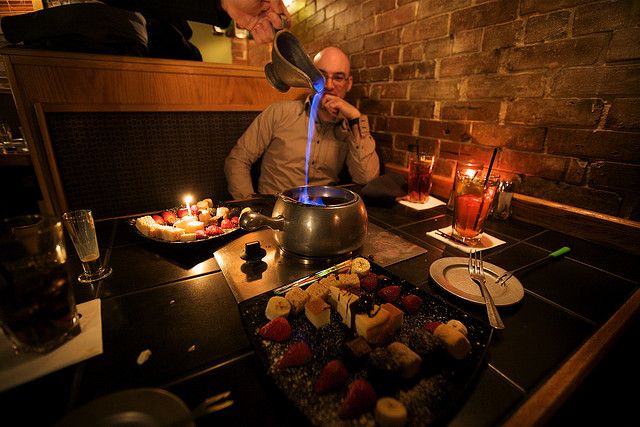 Fondue was invented in Switzerland in the 1700s when peasants would take their stale cheese and stale bread and make a meal by melting the cheese in a pot and then dipping pieces of the bread into it. The stale cheese tasted better and the hardened bread became soft – a win-win for the peasants! The word fondue comes from the French verb fonder, which means to melt.

If you’re a fondue fanatic, then you’ve probably heard of The Melting Pot, one of the most successful fondue restaurant chains in the United States. Fondue, for the uninitiated, involves dipping your food into a sauce, typically a cheese sauce for a meal and a melted chocolate sauce for dessert.

It was 40 years ago in 1975 when the first The Melting Pot restaurant opened in Maitland, Florida, near Orlando. Mark Johnston worked there as a waiter during college and was taken by the concept. He and his two brothers, with the blessing of the original owners in Maitland, opened a second Melting Pot in Tallahassee. It was wildly successful and opened the doors for further development.

Here’s how The Melting Pot stirs things up in the upscale dining segment:

Fondue is still a novel idea for many, and it seems exotic for those who have never tried it. The Melting Pot approach is one that feels upscale, with its interior décor of black and red, dim lighting, and wine selections. For this reason, it does well for romantic and special occasion meals. Many feel the pricing is also rather upscale.

The standard 4-course meal (each course is also offered individually) consists of a cheese fondue (into which you dip pieces of bread, apples, and veggies), a salad, a main course, and a dessert fondue (usually chocolate, into which you can dip all sorts of things, such as brownies, angel food cake, strawberries, bananas, marshmallows, and so on).

Because fondue has to be kept warm, each table has one or two flat-top burners in the center, and you actually cook your food yourself right there at the table.

On the Way Up or Down?

It’s hard to tell what’s happening with The Melting Pot as a chain. The number of locations has declined by a handful of restaurants each year since 2009, when it had 142 locations. Now there are only 126.

Then again, the chain may be on the rebound. It engaged in major menu and operational overhauls in 2011 and 2012, and this year achieved the number one ranking in Casual Dining from the 2015 Consumer Picks through Nation’s Restaurant News. It got high ratings in a number of categories, including Cleanliness, Service, Atmosphere, Craveability, Food Quality, and Likely to Recommend.