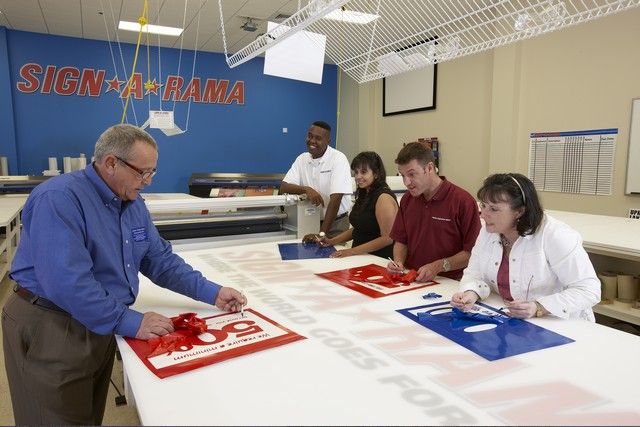 Signarama continues to dominate the signage industry, with eight straight years as the top sign franchise on the Entrepreneur Franchise 500 list. The company uses innovative software, high-tech equipment and quality materials to create signage for a wide range of customers who want a full-service purchasing experience.

Signarama was founded in 1986 by Ray Titus and his father, Roy Titus, founder of Minuteman Press, a national printing franchise. The two were familiar with the signage industry from their work within the printing industry. They moved from a warehousing signage concept to a simple, more accessible retail concept to making sign-buying easier and more pleasant.

The first Signarama store was located in Farmingdale, New York. A second location followed within a year in North Palm Beach, Florida. The company grew exponentially from there and now has more than 850 sign centers around the world.

Military Times named Signarama to the No. 3 spot on its Best for Vets: Franchises list for 2014-15 in September 2014. The survey incorporates 110 criteria into the analysis of each franchise’s efforts to provide opportunities for success for veterans. Military Times, which publishes news and information for service members and their families, comprises Army Times, Navy Times, Air Force Times and Marine Corps Times.

Signarama’s VetFran program helps service members returning from their deployments take advantage of franchise opportunities, including training, financial assistance and industry support. Discounts for veterans are applied depending on length of service; vets who have served for more than 20 years can gain a 50 percent discount off the franchise fee.

Signarama in June 2015 named IkeGPS as a preferred vendor within a partnership that offers franchisees Spike, a laser measurement solution. Spike can quickly measure a signage location, gathering the width, height and area of the facility from a photo on a smartphone or tablet.

“It’s an amazing tool, and I use it every day – no more climbing ladders or counting bricks,” franchisee Bryan Clayman, owner of a Signarama franchise in Walpole, Massachusetts, said in a news release.

Clayman said he no longer brings a ladder with him for surveys and estimates, because he can get all the measurements safely, quickly and efficiently from the ground and store the data within the app.

“The ROI on purchasing Spike is amazing,” he said. “In fact, it’s worth more than what I paid for it.”