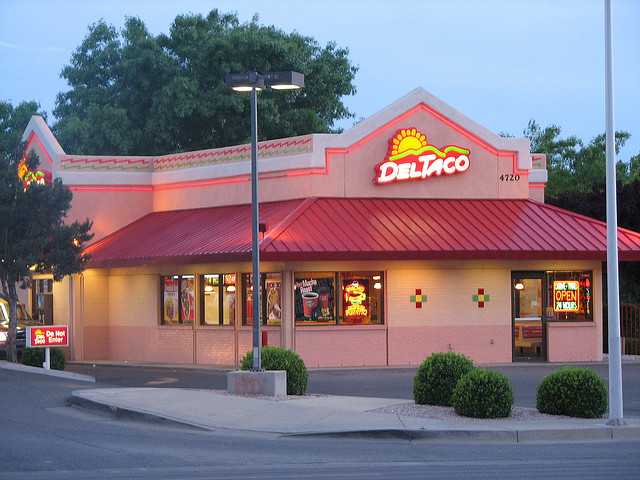 Del Taco has been around for more than 50 years. It presents a combination of both American-style Mexican food as well as American staples (burgers, fries, shakes).


The first location opened back in 1964 by Ed Hackbarth and David Jameson in Yermo, California. Within a couple years and four more locations a third partner joined the enterprise, Dick Naugle, and the trio found its fledgling chain spreading throughout Southern California.

In the early 1970s Naugle left the company and started his own Mexican chain called Naugles, and the remaining duo sold the burgeoning chain. By 1977 there were 50 locations, but just a year later in 1978 there were 100.

When 1981 rolled around, there were around 350 locations, still largely concentrated in California. Towards the end of that decade, Del Taco acquired the 171 Naugles locations as well. It was also during the 1980s that the chain started keeping its restaurants open 24 hours.

The 1990s saw a major rebranding effort that included everything from building exteriors to restaurant kitchens and the corporate logo.

Early in the new millennium Del Taco scored several important deals. One was with American military bases, and the other was a series of lucrative sports-sponsorship programs that included both minor and major league hockey, basketball, and football teams. The sports program resulted in Del Taco locations averaging $1 million in sales per year – an impressive feat as such fast food giants McDonald’s and Carl’s Jr. were experiencing declining annual sales.

The Founder is Still Involved

Although founder Ed Hackbarth sold the chain back in the 1970s, he retained the right to continue developing Del Taco locations, and currently helps manage three locations in Barstow, California. Having the expertise of the founder still available to the chain, however limited, is impressive. After all, he’s approaching 80 years of age!

According to QSR Magazine, Del Taco occupies the number three slot in the Mexican QSR segment, trailing behind Chipotle and Taco Bell. Its $660+ million in annual sales, however, trails significantly behind Chipotle’s $4.1 billion and Taco Bell’s staggering $8.2 billion.