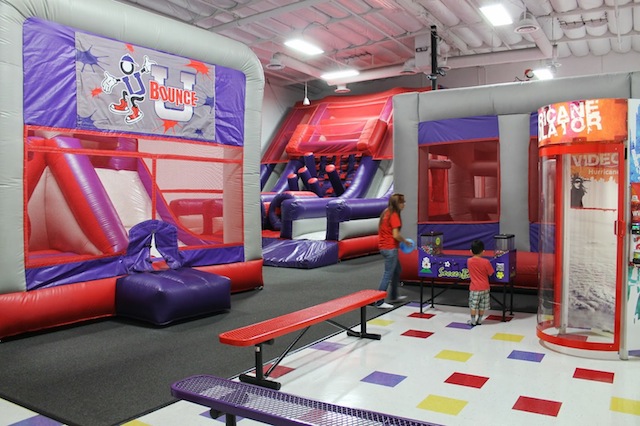 What kid doesn’t love a bouncy castle? With BounceU, children don’t have to wait for the carnival. They can enjoy private birthday parties, as well as other events and “open bouncing” time, in a variety of inflatable play structures.

Parents magazine picked BounceU for its list of 2014 Top 10 Best Birthday Party Places for Kids, so it appears the chain is a top pick for both children and parents.

The chain creates birthday-party experiences for kids that are designed to be fun, safe and free of stress, featuring gigantic inflatables such as obstacle courses, slides and basketball nets. Parents can also arrange for photos to be taken at parties, as well as food, beverage and goody-bag add-ons and other specials.

From Bounce Zone to BounceU

BounceU was founded in 2003 in Gilbert, Arizona, by Brent and Carron Schmick, whose first location was initially named The Bounce Zone. Franchising began in 2004.

The Schmicks teamed up with Laura and Eric McCabe in 2004. The McCabes invested about $400,000 in the chain, including start-up costs for opening a second location. The company was renamed BounceU.

The chain was purchased in 2008 by PIU Management, the holding company that owns Pump It Up, previously BounceU’s top competitor. The two chains operate separately under the umbrella of Fun Brands, a PIU Management brand, along with Fun Brands Carousels.

In addition to birthday parties, some locations offer events such as themed camps and parents’ nights out, as well as opportunities to enjoy bouncy activities for no reason. Parents can also sign their kids up for Open Bounce for casual fun or take the experience up a couple of notches and opt for the more flashy Cosmic Open Bounce, which features a light show in the dark, glow-in-the-dark accessories, and music.

BounceU celebrated its 10th anniversary with a sweepstakes that brought a $10,000 scholarship to a 10-year-old boy from Fishers, Indiana. Jackson Caldwell, the grand-prize winner, was one of thousands of people to enter the sweepstakes. The money was deposited into a 529 College Savings Plan, according to a January 2014 news release from BounceU.

At 10, Jackson already has an idea of where he’d like to go to college.

“I am interested in geography and computers and would like to study both of these things,” he said in the news release. “I would like to go to the University of Kansas or Butler University when I grow up.”