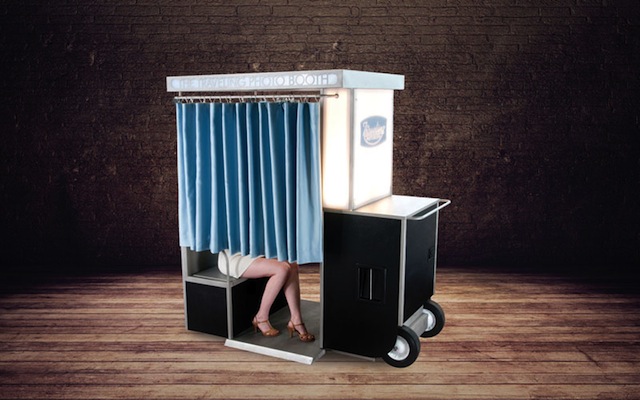 As photo booths continue to rise in popularity, especially in connection with special events, The Traveling Photo Booth keeps adding more flair to set itself apart from similar businesses. Co-founders Matt Gassman and Jacob Stewart say many features of TTPB are still in the research and development stage.

Gassman and Stewart were roommates and friends at the University of Minnesota in Minneapolis, where Gassman earned a degree in architecture and Stewart earned a photography degree in 2004.

Stewart was inspired when he photographed a wedding reception the following year and saw how popular an old photo booth was among the guests. He felt such a booth could be even better, so he pitched the idea to Gassman.

After the young entrepreneurs designed the booth, Gassman built it and Stewart wrote the software to run it. Their first creation, featuring carved wood and Bob Dylan tunes, debuted at a holiday party for the Loom Architectural firm in December 2005. The booth was a hit, and the two became business partners.

The second TTPB model was released in 2006, and the brand expanded nationally in 2008 with the release of Model 3. The TeleBooth mobile app, added in 2013, provided a way for users to share their photos online instantly. In 2015, the company launched a photo stand and added animated GIF creation. The company continues to update its software and machines.

Users within the photo booth can take photos of themselves while adding text and speech bubbles to the photos. They can also play trivia and raffle games inside the booth, whose curtain can be pulled back to accommodate large groups.

Guests using the booth start out with the typical arcade photo booth experience, but users can upgrade that experience with add-ons. The Social Package Add-On, powered by the TeleBooth mobile app, lets users upload their photo strips to their mobile devices and share them with friends and family and on social media through an online gallery hosted by TTPB.

Businesses can get in on the fun and increase customer engagement, trust and brand loyalty by renting a booth for an open house, job fair or other event involving community outreach.

With Custom Branding add-on, a business logo and message can be included on every photo and on the large touch screen. Businesses can get even more reach with the Social Package Add-on and the Custom Strip Center, which includes a message strip with the photo strip.

Add-ons that cater to weddings, but could easily apply to reunions and other gatherings, include the Social Package Add-on; the Custom Strip Center; a guest book, created during the event; a large photo strip collage with dozens of photo strips; thank-you cards including images of photo strips; frames designed to fit the photo strips; and an event CD that will produce all the photo strips for browsing and making creative projects. The CD also contains animated GIFs created by blending several similar images and animating them to make what amounts to a digital flip book.

The company is headquartered in Minneapolis, with more than 20 rental offices covering a wide swath of the U.S. In addition to Minnesota, these offices are in major cities in Wisconsin, Iowa, Illinois and Michigan in the Midwest; Pennsylvania, Virginia and the District of Columbia in the East; California, Nevada, Arizona and Colorado in the West; and in a state-high five locations down South in Texas.

The Traveling Photo Booth was named one of the Top Low-Cost Franchises in July 2015 by Franchise Business Review. Franchisees say in reviews that they appreciate the responsive management and the frequent updates to the innovative software that runs the booths.