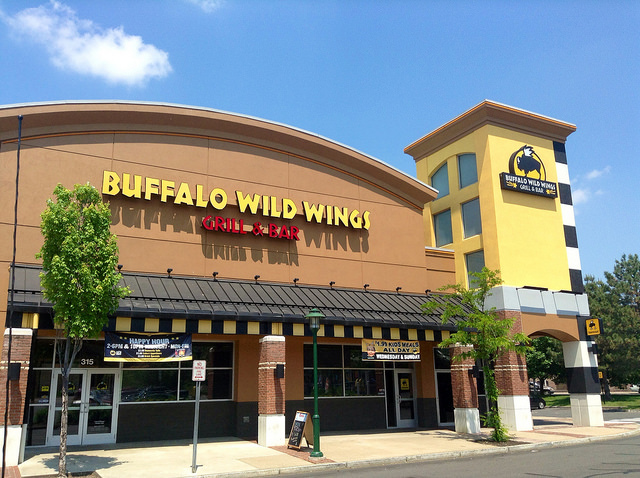 CEO Sally Smith said the 41 percent price increase in poultry prices followed a year of unusually low prices. She noted that an increase in labor costs also impacted earnings. The company’s goal for earnings growth is unchanged at 18 percent for 2015, Smith said.

Buffalo Wild Wings reached 1,000 restaurants on Jan. 27, 2014, with three openings in Carson, California; McHenry, Illinois; and Buchanan, West Virginia, and hit 1,001 the next day in Livermore, California. Just prior to the milestone, a Buffalo Wild Wings opened in Monterrey, Mexico, on Jan. 25.

The Minnesota-based chain is now at about 1,080 locations. Buffalo Wild Wings opened its first restaurant in 1982 in Columbus, Ohio, and moved its corporate headquarters to Minneapolis in 1997. It now has at least one restaurant in every U.S. state, with stores in locations around the world.

To serve busy people who don’t have much time for a lunch break, Buffalo Wild Wings in April 2015 introduced its B-Dubs Fast Break lunch program. Customers will have a “Pick 2” menu choice with three price points, featuring seven entrees and seven sides, along with select add-ons. The Southwest Prime Rib Sandwich and the Chicken BLT are two new entrees that are part of the program. Customers can also choose from two small portion sizes of wings, which come with fries.

One of Nation’s Fastest-Growing Chains

Nation’s Restaurant News picked Buffalo Wild Wings as No. 9 on its 2014 top 100 list of fast-growing chain restaurants. The pick, announced in July 2014, praised the chain’s upgraded decor and technology that enhanced sports-viewing experiences and kept sports fans engaged. Buffalo Wild Wings’ U.S. unit count increased 10.6 percent in the previous two years and the company expects to expand outward from its Midwest core to focus on coastal regions in the U.S.

Davis Added to Expanded Board

Buffalo Wild Wings Inc. announced in November 2014 that it had added Cindy L. Davis to its board of directors, expanding the board to eight members. Davis was previously vice president of Nike Inc. and president of Nike Golf.

The restaurant chain chose a new creative advertising agency in November 2014. TBWA\Chiat\Day will lead the chain’s creative work, including national campaigns for TV and radio, as the agency of record. The agency, based in Los Angeles, has served such clients as Apple, Miller Lite and Gatorade.

The company’s previous agency was 22squared of Atlanta, which had worked with Buffalo Wild Wings for eight years.

Buffalo Wild Wings in March 2015 introduced its #WingWisdom campaign, a college basketball-themed campaign in connection with March Madness. The campaign, which used the hashtag #WingWisdom to show how to properly fill out tournament brackets, utilized television, social media, in-restaurant promotions and on-site promotions during the NCAA Final Four.

Through a partnership with NTN Buzztime, Buffalo Wild Wings is bringing 7-inch Samsung Galaxy tablets to its tables. The BEOND tablet platform produced by Buzztime offers the ability for customers to order food, pay their bills, play games, listen to music and watch TV. The tablets, already available in about 150 corporate locations when the partnership was announced in March 2014, were expected to be installed on tables in all locations in North America by late 2015.

GameBreak, a multi-platform gaming experience playable in Buffalo Wild Wings restaurants, on computers, and on mobile apps, debuted in September 2014. Customers compete to win prizes in a variety of sports-related games.

Already reaching Canada and Mexico, the chain opened its first location outside North America in the Philippines in January 2015, a move expected to spawn several additional Philippine locations. Stores in Dubai and Saudi Arabia are set to open in summer 2015, with locations in Vietnam and India anticipated in the near future.

Buffalo Wild Wings landed in Times Square in May 2014, with a 15,000-square-foot, multi-level building. The splashy restaurant features multiple levels of dining experiences, including a private party room, mezzanine-level bar and patio, and a patio on the roof.