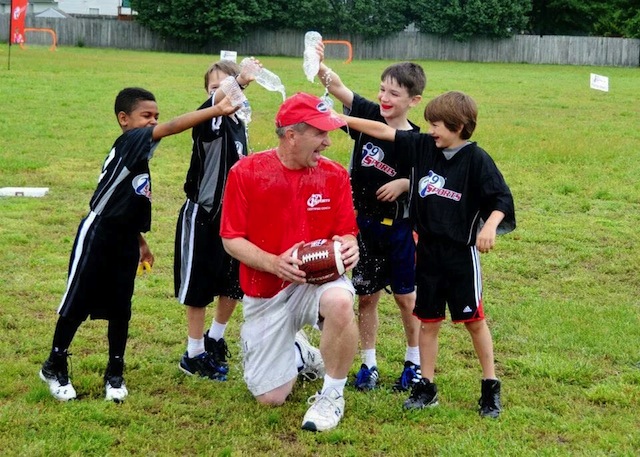 It was back in 1995 when Frank Flume had to make a decision. He had come to the sobering conclusion that his career as a medical device sales representative was utterly unfulfilling. He asked himself a question that has occurred to many people over the years: How can I make a living doing something about which I am passionate?

Figuring out the passion part of that equation was easy – Frank loved sports. As a kid he had created a neighborhood wiffle ball field in his backyard, complete with dugouts and a bicycle parking lot. As an adult, he played in local softball leagues, which he couldn’t help but notice were very poorly run.

When he looked into it, he found out those leagues actually make a surprising amount of money. He set out to build a better league structure and within two years he had more than 1,000 teams playing like clockwork.

It was when he and his wife were expecting a baby that he realized youth sports could be even more profitable than adult leagues. After all, the average family has two children, and if you get one to sign on, you’ll probably get both.

In 1998, i9 Sports was launched, and it was an immediate hit. He began selling franchises in 2003. Today, i9 Sports has more than 500 locations and 650,000 members enjoying youth sports leagues, camps, and clinics for kids ranging from 3-17 years of age in flag football, soccer, basketball, T-ball, and cheerleading.

Focus on the Child Experience

What makes for an excellent child’s experience in youth sports? The i9 solution highlights that all skill levels are welcome, with no tryouts or drafts. Everyone plays in every game. Practice is limited to one day a week, and conveniently scheduled prior to a game. There are trained officials at every game, match, and meet.

Above all else, the primary goal is to make sure the kids have fun playing sports. Providing an excellent experience ensures a high percentage of renewals from season to season.

Focus on the Parent Experience

Disorganization, lack of communication, and inconvenience are among the problems parents encounter in youth sports programming, as well as a destructively competitive “win-at-all-costs” mentality and highly political culture.

The i9 approach takes all that out by maintaining clear organization and communication with parents, convenience, and a focus on fun, good sportsmanship, inclusivity, and safety for children. Parents are not subjected to mandatory volunteering or fundraisers of any kind.

What’s in a name? The answer is quite a lot in the case of i9 Sports. There are nine i-words that capture the spirit of what the company is about: Imaginative, Innovative, Interactive, Integrity-driven, Impassioned, Inspirational, Instructional, Insightful, and Inclusive.

It’s a winning formula because those words represent everything parents want for their children.

In 2014, i9 sports opened 15 new company locations. In the first six weeks of 2015, two new franchises were sold in Philadelphia, PA and Madison, WI.

2014 also saw the November hire of Charlie Carnahan to be the i9 Sports Director of Franchise Development to support the company’s expansion plans.