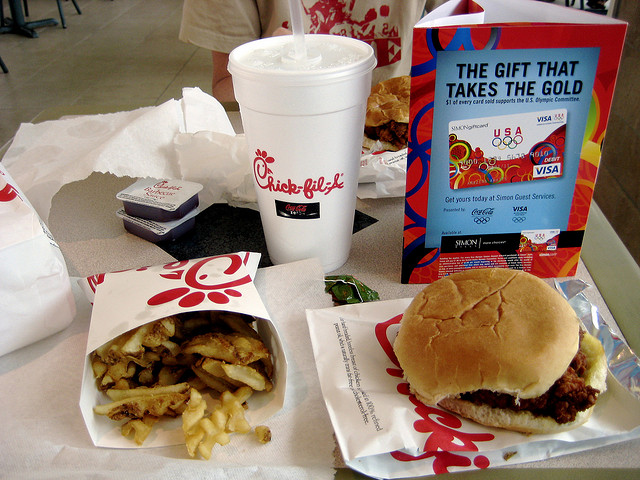 Chick-fil-A founder Samuel Truett Cathy died in his home on Sept. 8, 2014, at the age of 93. Cathy, who grew up during the Great Depression, was chairman emeritus at the time of his death.

Cathy opened a diner in Atlanta in 1946 that was originally named the Dwarf Grill and later The Dwarf House. He opened the first Chick-fil-A restaurant in 1967 in Atlanta. Chick-fil-A now has more than 1,900 restaurants in 42 states and Washington, D.C.

The chain, still family-owned, has surpassed KFC as the United States’ largest quick-service chicken restaurant chain. It had nearly $6 billion in systemwide sales in 2014.

Chick-fil-A later backed off that stance, saying it would not take stands on political or social issues. It also changed its charitable giving practices, eliminating most donations to anti-LGBT organizations.

Chick-fil-A failed to block Bo Muller-Moore’s trademark claim for the “Eat More Kale” phrase the Vermont man has been printing on T-shirts for more than a decade. The application was approved in December 2014 by the U.S. Trademark and Patent Office.


The chicken chain’s objection was based on its slogan, “EAT MOR CHIKIN,” which is a “quote” from a fictional cow to steer people away from beef and toward chicken.

Chick-fil-A announced in February 2014 that it would phase out antibiotics (including the ionophores that are used to prevent animal intestinal illnesses) from its chicken supply over the next five years.

The chain said the choice was based on the wishes of 70 percent of its customers, shown in market research.

Waffle Potato Fries are also one of the top-selling menu items for the chain.

Mobile ordering and mobile payments were added in December 2014. The features are offered through the Chick-fil-A Mobile App.

Brent Ragsdale, formerly vice president and chief accounting officer, was named chief financial officer in January 2015. He replaced Buck McCabe, who will have an advisory role on the executive committee until the end of the year, when he will retire.

Jon Bridges was promoted to chief marketing officer, replacing the retiring Steve Robinson, who held the position for three decades. Bridges was vice president of customer experience for five years before his promotion.