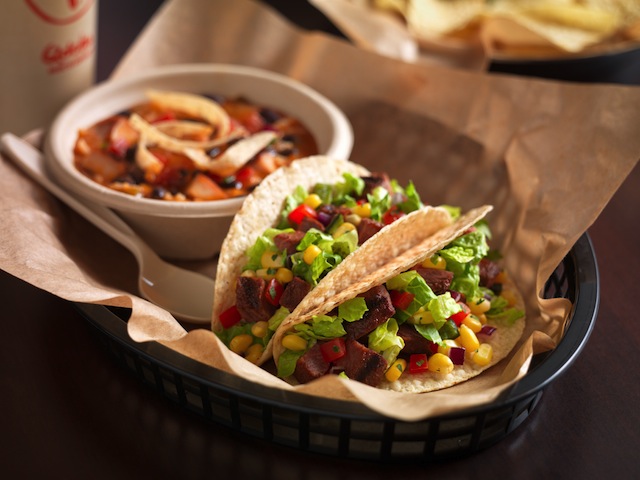 Don’t let that position fool you, however. Qdoba is a chain on the move that keeps finding new ways to shake up the status quo. Here are some of its latest moves:

Qdoba rolled out a new pricing structure in October 2014 that it characterizes as “inclusive pricing.” Instead of paying for extras (guacamole, etc.), customers now pay one of two prices for an entrée based on the protein chosen, and they can add as many extras as they want free of charge.

Chicken, vegetables, or ground beef come at one price point while shredded beef, pork, and steak come at another price point.

Qdoba’s main rival, Chipotle, has a similar pricing structure, with the exception that it still charges a premium price for its guacamole.

Since making the transition to the new price format, Qdoba has gone through twice as much guacamole and has seen nearly half its customers opting to add queso as well (a melted cheese option absent from Chipotle’s menu).

Same-store sales at Qdoba have bumped up significantly. For the 16-week period that ended on January 18, 2015, the chain experienced a 14% increase from a year ago. To put that number in perspective, that increase for the previous year period was just 2%.

It’s giving nearly all the credit for that uptick to its new pricing structure. Even though Qdoba’s new pricing raises the overall price of its entrees, customers don’t seem to even notice, given all the free toppings, which also seems to have resulted in a significant increase in traffic.

Qdoba does a surprising amount of tinkering with its menu as compared to its main rival, Chipotle. Combing through Chipotle’s press releases over the last couple years, you’ll find lots related to the company’s finances, food activism, and charitable giving, but the last time there were any press releases related to menu innovations was back in early 2013.

By contrast, Qdoba just last month rolled out two new products – Bacon Jalapeño Queso (the chain’s signature 3-Cheese Queso infused with a mix of hardwood-smoked bacon and a hint of jalapeño heat) and Quesomole (combining a serving of guacamole with any of its queso offerings).

In December 2014 it introduced three new sauces for its smothered burritos, including Tangy Verde (mild-to-medium Smother with a tangy kick), Bold Red Chile (medium Smother with a toasted chile flavor and a hint of sweetness), and Smoky Chipotle Cream (a hot Smother that is rich, creamy, spicy, and smoky).

Next post: FDD Talk 2015: The Jack in the Box Franchise Opportunity (Financial Performance Analysis, Estimated Costs, and Other Important Stuff You Need to Know)