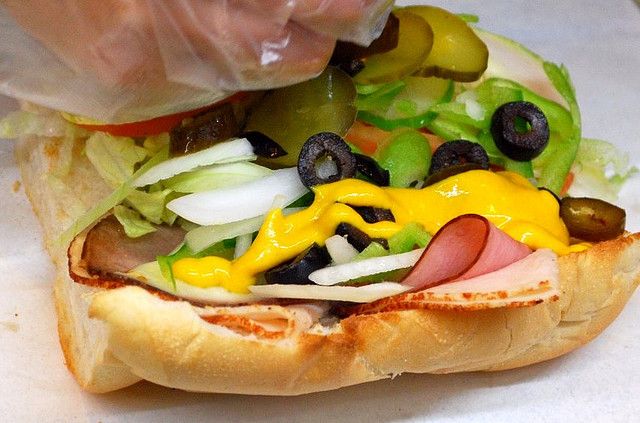 This Franchise Chatter Hot List on ways to add more veggies on fast-food menus was written by Laurie Swenson.

When you sit down at the dinner table with your family, chances are you have a vegetable on your plate. It may not be the largest portion on the plate, as recommended by the USDA, but it plays a role in the meal.

At fast-food restaurants, however, vegetables are mostly absent, aside from lettuce, tomato and onions on some sandwiches, as well as salads. Fruit has made its way on the menu, such as with McDonald’s packets of apple slices, but fast-food customers don’t yet have an option for a separate portion of veggies beyond buying a salad.

Here are seven ideas fast-food restaurants could use to offer veggie enthusiasts (and parents who just want their kids to get a few bites of vegetables) some more produce.

A packet of mixed cold vegetables, served with a small packet of the customer’s choice of spinach, red pepper or ranch dip – or even better, super-healthy hummus – would make Mom and Dad happy, and some kids, too. The veggies could be some combination of thin carrot and celery sticks, bell pepper strips, cucumbers and grape tomatoes, in a menu option marketed for both children and adults.

If a fast-food restaurant that sells side salads doesn’t already have a salad as an option for a kids’ meal side, it should get moving on this. It’s a nice way for kids to get a mix of vegetables. A child-sized salad should also be an a la carte option. This is really a no-brainer, as it’s just offering a smaller version of what already exists for adults.

A hot vegetable in a cup as a side dish would be a real nod to the family dining table. A restaurant could give customers a choice of several hot vegetables – for example, peas, green beans, diced carrots or mixed vegetables – and serve them with a pat of butter. Canned or otherwise already-cooked-and-packaged vegetables would be the quickest – albeit not the best – way to serve up this side dish. A frozen vegetable would take at least five minutes to steam or grill.

If you remember the old story about Stone Soup, where the poor, hungry passerby tricks a selfish old woman into helping him turn a stone into soup using all her ingredients, you may remember that they drop a bunch of vegetables into the pot along with the “magical” stone and water to make the delicious soup.

Vegetable soup can be very hearty, with a vegetable broth or chicken-broth base and, for example, carrots, celery, onion, green pepper, garlic and spices. Variations could include a cream-based broth or the addition of white-meat chicken and/or a starchy food such as lentils, beans, rice, noodles or potatoes. Using vegetable broth could attract vegetarians and vegans, especially with a tasty non-animal protein source such as black beans or lentils.

Vegetable juice is a fine beverage and a pretty nice way to get two full servings of vegetables. Vegetable-fruit varieties found in products like V-8 Fusion don’t taste at all like vegetables, but still provide a serving’s worth. (Kids don’t have to know any of this.) And keep it simple; perhaps just a regular and low-sodium versions of the vegetable juice and two or three different versions of the vegetable-fruit blend.

The burger in a kids’ meal typically doesn’t include much more than ketchup, mustard and pickle slices, but restaurants could ask these young diners if they’d like additional items such as lettuce, onion and tomato. Maybe many kids would choose not to eat vegetables with their burgers, but how do we know if they don’t have the option of thinking outside the burger?

A stir-fry wouldn’t be the quickest fast-food menu item, but neither is the Big Mac you might order without cheese. A restaurant could offer several stir-fry options, each combining slightly different vegetables (such as bell peppers, onions, carrots, broccoli and sprouts) to try to appeal to different tastes.

Each serving of frozen stir-fry vegetables could be contained in a packet and cooked on a grill along with a sauce, also from a packet, in choices such as garlic, Teriyaki, soy-sesame, and sweet and sour. Chicken, already available in salads, could be an add-on for an additional price.

Some fast-food restaurants do better than others when it comes to vegetables. Subway is an easy example, with veggies in bins right in plain sight, ready to be placed on a sub sandwich. If you really want a great selection of vegetables, but you still want fast food, this is where you should go. Period. You get to stand there and tell someone what you want on your sub.

I like to order all the “normal” veggies (except black olives; I thought for the longest time that all olives except the green ones were gross, but that was before I tried kalamata olives, which are amazing) and skip anything hot.

Erbert and Gerbert’s pulls out the center of its bread and tucks the meat and veggies inside the well for a sub that stays well-packed. The popular “guts” of the bread are saved and served along with the sandwich; some diners like to dip them in soup. The restaurant also creates box lunches and platters of mini-subs for healthy catered lunches at large gatherings or work sessions.

Another popular sub shop, Jimmy John’s, sells an Unwich, a sub wrapped not in bread, but in lettuce. Panera Bread has a nice vegetable selection for its sandwiches as well as its soups.

And many fast-food restaurants have numerous salads, at least for adults, some of which are quite hearty and packed with vegetables.

Most pizza places have a veggie pizza or two, or you can simply order a la carte toppings. Domino’s also has a hearty Mediterranean Veggie Sandwich. Pizza Hut has a Veggie Lover’s pizza with marinara sauce, mushrooms, red onions, green bell peppers, Roma tomatoes and black olives. I would pick off the mushrooms and black olives and maybe order some green olives, which I love on a pizza.

It seems that at least for now, if you want a decent selection of vegetables, don’t go to a burger joint – go somewhere that makes subs or pizza, and pile on the veggies. That said, fast-food customers’ wishes have sparked burger joints to increasingly expand into healthier territory, some dropping hydrogenated oils and high-fructose corn syrup and using fewer preservatives. Is it only a matter of time before we can get steamed cauliflower at Burger King?

Previous post: Q&A with Jack Halpern, Founder and CEO of My Elder Advocate

Next post: FDD Talk 2015: The Wings Over Franchise Opportunity (Financial Performance Analysis, Estimated Costs, and Other Important Stuff You Need to Know)