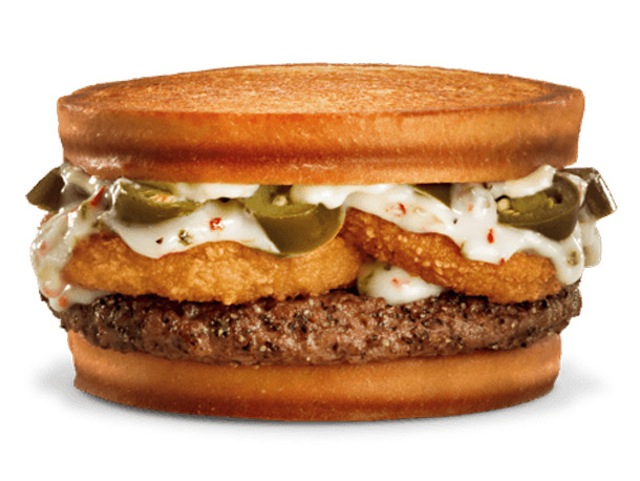 This Franchise Chatter guide on the Jack in the Box menu was written by Sherman Morrison.

Robert Oscar Peterson was already a successful restaurateur when he opened Topsy’s Drive-In in 1941 in San Diego, California. After opening several more locations, the small chain was renamed Oscar’s, and it was the first chain to make use of the two-way intercom ordering system for faster ordering.

In the early 1950s the chain was re-designed into Jack in the Box. By the late 1960s there were more than 180 locations, all in California and the Southwest, when Peterson sold the chain to Ralston Purina.

The 1970s saw the beginning of franchising and explosive growth for the chain. In the 1980s the chain matured its image, getting rid of all the clowns that appeared in its logos and stores, and greatly diversified its menu to attract an older and more affluent clientele. By 1987 the chain had 897 stores and sales of $655 million.

Jack in the Box, which has always been headquartered in San Diego, currently boasts more than 2,200 locations in 21 states and Guam, with $1.48 billion in revenue – 75% of which is from restaurant sales, and 25% of which is from franchising revenues. And fully 85% of its customers are ordering via the drive-thru or for take-out.

Jack in the Box has proven itself to be a scrappy chain that keeps on keepin’ on in spite of all the competition in the world of fast food. Because Jack in the Box menu prices can vary by location, this article is going to focus on the quality of its menu offerings, with a particular focus on its hamburgers and cheeseburgers.

Back in 2007, Jack in the Box tried to distinguish its burgers with the word “sirloin.” It even claimed that sirloin was better than the Angus beef used at other chains (Carl’s Jr., Hardee’s, Wendy’s, and Burger King, to name a few).


Of course it didn’t take long for people to realize that sirloin is a cut of beef found on all cattle (the choice part of a loin of beef), while Angus is a particular breed of beef. Nice try, Jack, but no go. There were lawsuits, of course, but they were all thrown out.

Having said that, Jack has some really great burger options. I’ll start with some of the more eye-catching (and taste-bud pleasing) burgers and work my way down to the more mundane fare, about which I won’t have much to say as they’re pretty standard.

Here are the 13 different burgers on the current Jack in the Box menu:

This is a relatively new signature burger with a quarter-pound beef patty topped with melted garlic herb butter, layered with provolone cheese, a dab of creamy tomato sauce, green leaf lettuce, and tomato slices, all on a soft and toasty new gourmet bun.

The bun here is a real standout – dense, a touch of sweetness, well-toasted, and sturdy enough to hold up while being handled. The garlic herb butter is also a standout – garlic can be tricky as it so easily overpowers everything else, but Jack has just the right level to complement the beef, which is itself flavorful and peppery.

Even better, however, is the creamy tomato sauce, which adds an interesting sweet, tangy zing almost like a French dressing. I love provolone cheese, so I was glad it was on this burger, but it didn’t seem to really contribute much, nor did the lettuce.

I was excited about leaf lettuce at first because it seems like a naturally better choice than the shredded iceberg lettuce used at so many chains. Unfortunately, Jack’s leaf lettuce leaves a lot to be desired. It’s supposed to be “green” leaf lettuce, but what you get tends to be more yellow or white than green. It just doesn’t feel very quality.

That being said, it doesn’t detract much from this awesome burger. It may even be the chain’s best offering.

Another new signature burger with a quarter-pound beef patty topped with melted garlic herb butter, layered with strips of hickory smoked bacon and real Swiss cheese, with a dab of creamy bacon mayo on a toasty new gourmet bun.

Everything that was good about the Classic Buttery Jack in terms of the bun and beef and garlic herb butter applies to this burger. While it’s lacking the creamy tomato sauce, it sports the addition of mayo with little bits of bacon in it, which complements the strips of bacon that come on this burger. And I’m pleased to say Jack does not skimp on bacon. You could receive as many as six strips on one burger!

The quality of that bacon, however, isn’t quite up to snuff. Don’t get me wrong, bacon does make everything better, and it works well on this burger, but it’s simply not as high-quality as I was hoping for, lacking in that essential crispiness you want in bacon. It does give a nice salty, porky boost to the whole affair, though.

That garlic butter will definitely get all over your hands, which can only be prevented by keeping the paper wrapper in place as you eat it. This definitely runs a close second to its buttery cousin.

I was intrigued by the name of this burger because I wasn’t familiar with sriracha sauce, a hot sauce made with red chili peppers and garlic that originated in Si Racha, a coastal city in eastern Thailand.

Sounds like it ought to be nice and spicy, right? Wrong! Well, actually it is, but it’s not because of the sriracha sauce. It’s the jalapeños that really have the flavor and heat in this burger, so much so that you might not even notice that there’s sriracha sauce in there, and that’s just sad.

Speaking of sad, Jack’s sad lettuce doesn’t get any happier when it’s shredded, which is what they do to the lettuce on this burger. The lettuce falls out quite easily, which is too bad because much of the sriracha sauce is on that lettuce, so you’re losing that as well. But like I said, the jalapeños are already pushing the sriracha sauce aside with their spicy presence.

That’s not a bad thing, really, but when you’re expecting something really interesting and different by putting a Thai sauce on it, this is a disappointing execution that doesn’t deliver. At least there’s bacon on it, right?

This is a 100% sirloin patty with American cheese, red onions, lettuce, tomato, pickle strips, and peppercorn mayo sauce on a gourmet bun.

This is a pretty standard burger, but it’s very well executed. The beef is both substantial and well-seasoned with plenty of black pepper and who knows what else, all of which go really nicely with American cheese.

The bun is not overly sweet, and they put the peppercorn mayo sauce on both the top and bottom halves of the bun. I like that. I like it even better when bacon is added.

You’ll get two long slices of dill pickle on this burger, which is way more pickle than you get at most chains. If you’re into pickles, this feels like the amount of pickle you’d really want on a burger, as opposed to a couple of penny pickles lost in there somewhere like you get at many other chains.

Both the grilled onions and Swiss cheese are full of flavor, more than I would have expected, which was a pleasant surprise.

The style of the sourdough bread on this makes the burger come out more like a patty melt. The sourdough is very light on the sour part, which to me is the whole point of why I like sourdough bread, so it was a little disappointing on that front, but otherwise everything else works really well in this burger.

This is a very satisfying burger, but there tends to be too much in the way of condiments added. The ketchup, mustard, and mayo-onion sauce are all fine, but they aren’t always well-balanced – often too heavy on the mustard, which is a difficult thing for me to say because I love mustard. But too much of a good thing goes bad pretty quickly.

Other than that, this is a fine burger, but nothing to write home about.

Another burger with two beef patties, this time topped with three slices of bacon, American and Swiss-style cheeses, mayo-onion sauce, mustard, and ketchup on a sesame seed bun.

This is the chain’s standard burger, and it gets the job done. It does not, however, have anything that really makes you sit up and pay attention, except for the poor quality of the lettuce, which is limp and sad.

This is a jumbo beef patty topped with 2 slices of American cheese, lettuce, tomato, pickles, chopped onions, mayo-onion sauce, and ketchup on a sesame seed bun.

Again, nothing to get excited about here, except that it’s another decent burger – and two slices of cheese always catches my eye.

This burger has a jumbo beef patty topped with American cheese, mayo-onion sauce, and ketchup on a sesame seed bun.

Small beef patty topped with bacon, American cheese, mayo-onion sauce, and ketchup on a regular bun. Like a Jumbo Jack Cheeseburger, only smaller and with the addition of bacon. Apparently kids aren’t allowed to eat cheeseburgers at Jack’s without bacon. Not a bad rule to live by, really.

Although I’ve only focused on the burger section of the Jack in the Box menu, it’s rich with other offerings, including chicken and fish sandwiches, lots of breakfast options, five different tacos, all kinds of fried goodies (seasoned curly fries, potato wedges, French Fries, onion rings, stuffed jalapeños, chicken nuggets, chicken strips, and even egg rolls), salads, shakes, and other desserts.

I think Jack in the Box did the right thing to get rid of the clown logo of old. After all, it seems people today find clowns more scary than fun or entertaining. Besides, they still use a resurrected and somewhat creepy Jack character that borders on clown-ish in their commercials, so if you need a scary clown fix, that’s where you can get it.

Jack in the Box has always been daring when it comes to criticizing other burger chains, attacking them for their low-quality practices and so on. But Jack in the Box is a big fast-food chain like the rest of them. Sure, they may do this or that thing slightly better than other chains, but I’ll bet you could put it under the microscope and find plenty of things to criticize about its operations as well. It makes me think of glass houses and throwing stones.

But as long as the Jack in the Box menu has so many burgers that end up being as good as they are, I’m not complaining, or throwing any stones.