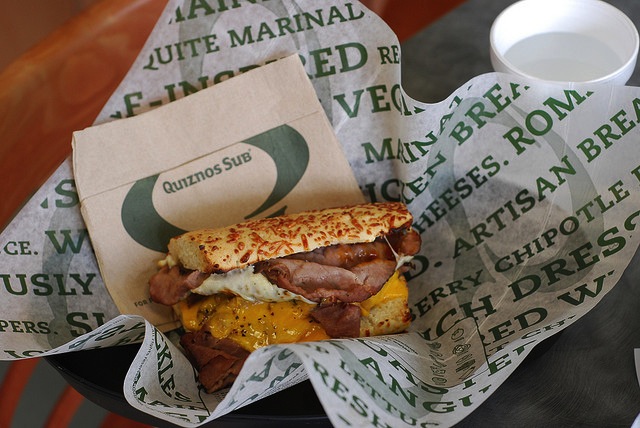 This Franchise Chatter guide on the Quiznos menu was written by Sherman Morrison.

Founded in 1981 by Jimmy Lambatos, Quiznos quickly grew into a major sandwich chain specializing in toasted submarine sandwiches. Lambatos sold the company in 1991 to father-son team Richard and Rick Schaden when there were just 18 locations. The Schadens took the company public in 1994, which resulted in plenty of funding for expansion, which is exactly what they did, although they decided to turn it back into a private company in 2001.


At the peak of its success in 2007, there were more than 5,000 Quiznos restaurants. But then the Great Recession came along and hit Quiznos hard. Thousands of storefronts were closed and a major restructuring effort was undertaken, including new leadership at the top who claimed the chain would focus on the quality of the food.

Part of the problem is that although focusing on the quality of the food is great, the chain was also trying to compete with Subway on price. But higher-quality ingredients cost more, and Quiznos buys the ingredients and then marks them up and sells them to franchisees, which is a very unusual structure that eats away at profits.

In the fast-food world, the formula that brought Quiznos to its knees is simple: High costs + low prices = recipe for disaster. That’s why there are only about 2,100 locations today.


So the big question is this: What is the newer menu really like? Because Quiznos menu prices may vary by location, I’m going to really hone in on the quality of the food on the menu, focusing on the chain’s primary specialty – its sub sandwiches.

Quiznos made a name for itself by always toasting their sandwiches. The chain explains it this way on its website: “Why do we toast? We like to think of our toaster as a ‘flavor maker.’ Sure, toasting makes our artisan breads taste even better. But our true toasting releases the flavors in our meats and cheeses. That’s why we’ve been toasting for over 30 years.”

So you’d have to specifically ask for the sub to not be toasted (as if anyone would want it that way!). Back when they were the only chain toasting, it was their distinguishing feature – but now everyone offers toasting, so it’s another unfortunate chapter in Quiznos’ troubled history.

A great sub needs great bread. Your choices among the chain’s Artisan Breads include White, Wheat, Rosemary Parmesan, or Jalapeno Cheddar. You can also have any sub put into ciabatta bread.

Speaking of stacking, a major difference between Quiznos and their nemesis Subway is in how the sandwiches are assembled.

They also get their toasting method right, using a rolling conveyor oven as opposed to Subway’s little zappers, which kind of look like an industrial version of an Easy Bake Oven for kids.

You should know upfront that a Quiznos sub is thoroughly toasted, which means its going to come out of the oven with some slightly burnt edges, but that’s okay in my book. It’s also worth mentioning that Subway seems downright stingy with their meat portions compared to Quiznos.

Below are the 22 different toasted subs you can get at Quiznos, with comments on only some of the sandwiches (I’d never get this article done if I tried all 22).

In the final analysis, Quiznos subs are really pretty decent. Most often I find them better than Subway’s. You have a sense with Quiznos that a real chef somewhere took the time to experiment with the different sauce combinations to figure out what really works best for each sandwich. That research has paid off in terms of interesting and flavorful menu options.

Quiznos does have a fairly extensive menu beyond its sub sandwiches, including grilled flatbreads, salads and wraps, savory soups, pasta, desserts (cookies and brownies), and a breakfast menu featuring various biscuits, burritos, flatbreads, and breakfast subs. Oh, and fresh-squeezed pink lemonade is a beverage option – an often overlooked but much-appreciated fresh drink offering.

The Quiznos menu has a lot to offer, but I also have a sense that it will continue to be a chain that struggles in the shadow of behemoth Subway, even though its subs might actually be better. Quiznos menu prices tend to be higher than Subway’s because they’re going for higher quality, and although sometimes they miss that mark, they do good work on their sandwiches.

There’s a lot to like about Quiznos relative to Subway, so hopefully something will happen that gives the chain new life in the coming years.