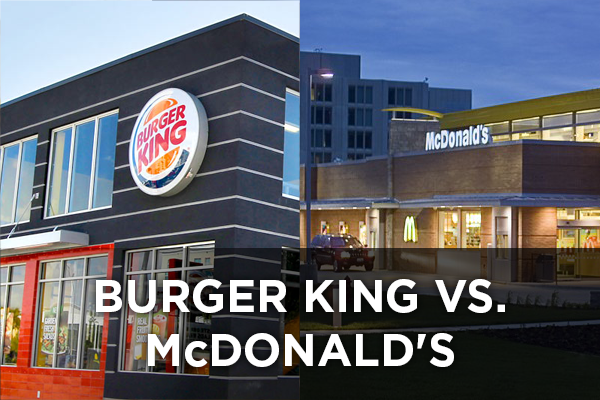 This Franchise Hot List was written by Laurie Swenson.

Fast-food wars are serious business for franchises, and McDonald’s didn’t get to its No. 1 spot by being a friendly rival. Then-McDonald’s CEO Ray Kroc was quoted in a Fortune article in 1988 as saying, “If they were drowning to death, I would put a hose in their mouth.”

Wow. Those are harsh words, but these fights are harsh competition. Everyone wants to have the top perch – including the bird that’s sitting on it.

Burger King launched a 1982 TV ad campaign featuring a 4-year-old Sarah Michelle Gellar, who told viewers that McDonald’s burgers were 20 percent smaller than Burger King’s (McDonald’s sued in a lawsuit that was settled in 1983 with terms undisclosed).

Several McDonald’s burgers are said to be aimed at beating the BK Whopper. Various sources claim that the McD.L.T., the McLean Deluxe, the Arch Deluxe and the Big N’ Tasty were all meant to go up against the Whopper, but all have fallen. The Big N’ Tasty was the most successful, going for more than a decade before it was removed from U.S. menus in 2011. The Whopper is still standing, although McDonald’s wears the crown over Burger King in the fast-food wars.

With rising beef prices and burgers getting more and more of a bad rap for calories, fat and cholesterol, some attention is shifting to cheaper, more healthy chicken, which brings us back to McDonald’s vs. Burger King.


In October 2014, Burger King offered a 10-piece box of chicken nuggets for $1.49, half the regular price, to challenge McDonald’s price of $4.99 for 20 nuggets at the same time McDonald’s was running its annual Monopoly game promotion, which brings in loads of people.

The meat in chicken nuggets is much cheaper than regular chicken breast meat that you’d find in a chicken fillet on a bun, so there’s not much lost in slashing prices when wholesale prices aren’t that high to begin with.

But another issue is whether such a deal will actually help Burger King or just boost its sales of the bargain food until the sale is over and the fickle customers go back to McDonald’s for the nuggets they like better.

Speaking of chicken, let’s not forget KFC. In July 2010, every location in the chain offered a free Doublicious sandwich (boneless chicken filet on a Hawaiian bun with bacon, Monterey jack cheese and Colonel’s Sauce) to the first 10 people who came in wearing a uniform from a competing restaurant.

The fried-chicken franchise said if anyone got fired over the publicity stunt, it would offer “Sandwich Amnesty” by giving him or her a job application. Seriously? That is as lame as Hawaiian buns are delicious. It’s like giving free water.

In 2014, numerous Taco Bell ads featured a couple of dozen men who happened to be named Ronald McDonald, promoting the new breakfast menu at Taco Bell. Another ad showed a male character who proclaimed he had been eating Egg McMuffins since 1984 but cut off his mullet after seeing Taco Bell’s Waffle Taco and “made a bunch of money on Craigslist” selling his 1980s stuff. The commercials were both clever and memorable.

“We knew we had to have a disruptive marketing campaign,” Chris Brandt, Taco Bell’s chief marketing officer, said in a Fox news article at the time. Of course. It was a tough sell for Taco Bell to take on the fast-food breakfast champion (which had a 31 percent share of breakfast sales among fast-food restaurants at the time), since it had never sold breakfast items in the past and was not the type of place diners think of at breakfast time.

It had to get attention with clever commercials, but also with breakfast items that married typical breakfast foods and Mexican fare. A Waffle Taco was a decent – albeit weird – way to do that.

McDonald played unconcerned when it responded with a Facebook photo of Ronald McDonald petting a Chihuahua, with the caption “Imitation is the sincerest form of flattery.” It also offered customers free coffee for two weeks.

Wendy’s, a strong contender with Burger King for the No. 2 spot in the fast-food universe, took on both BK and McD’s in the 1980s with its “Where’s the Beef?” ad campaign starring elderly actress Clara Peller belting out the gritty catchphrase.

Peller’s debut commercial, which first aired Jan. 10, 1984, featured three elderly women contemplating a gigantic hamburger bun holding a tiny hamburger patty. After the first two ladies poke the burger and murmur over the bun’s size, Clara glares at the mini-patty and yells her iconic catchphrase, demanding “Where’s the Beef?” A narrator then tells viewers that the Wendy’s single contains more beef than a Whopper or a Big Mac. Then Clara comes back and demands the beef again.

“Where’s the Beef?” caught on quickly, not only as an ad but as a funny pop-culture phrase as well. It might have taken Wendy’s further in the franchise wars, but the franchise dumped Clara in 1985 after she performed in a Prego pasta sauce commercial in which she proclaimed that she “finally found it.” The commercial mentions “real beef” and “lots of beef,” although Clara never says the word. Still, not a smart move.

Peller, who earned more than half a million dollars in 1984 for her commercials, promotions and appearances, lost out on a proposed three-year contract that would have given her six figures each year, but what did Wendy’s lose out on? How often does a burger commercial unleash a phrase that catches on that quickly?

Wendy’s should have simply tightened its reins on Peller’s outside advertising (she was allowed to do commercials that did not compete with Wendy’s) and kept this beloved cranky lady around. She wouldn’t have lasted her contract anyway, as she died Aug. 11, 1987, nine days after her 85th birthday. And she did all right in those last couple of years, even without Wendy’s, with her late-in-life fame.