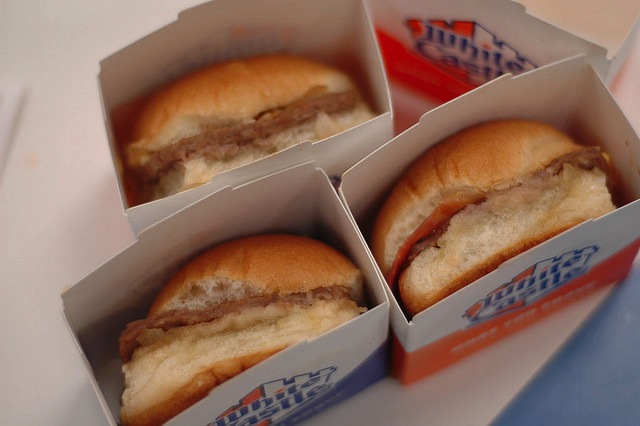 This Franchise Chatter guide on the White Castle menu was written by Sherman Morrison.

White Castle holds a special place in the history of the restaurant business. It is widely credited as the very first fast-food chain. It was started in 1921 by cook Walt A. Anderson and his partner Edgar Waldo “Billy” A. Ingram in Wichita, Kansas. The chain quickly branched out in other areas of the Midwest with its iconic white porcelain castle-like buildings based on the style of the Chicago Water Tower, including octagonal buttresses, crenelated towers, and parapet walls.

Anderson is credited with many firsts – inventing the hamburger bun, the kitchen assembly line, and chain-wide standardized methods, all of which allowed fast food to become a reality. In other words, Anderson and Ingram did for burgers what Henry Ford did for making cars.

Eventually Ingram bought out Anderson and kept the chain going, passing the reins to his son, E. W. Ingram, Jr., and then to grandson, E. W. Ingram III. Because the privately-held company has steadfastly refused to franchise or take on debt, it has remained relatively small, with only about 420 locations in the Midwest, Tennessee, and New York, as well as one in Las Vegas housed within the Casino Royale. The chain is currently headquartered in Columbus, Ohio.

Because White Castle menu prices may vary by location, this article is going to focus on the quality of the food offerings on the White Castle menu. I’ll start with their burgers, for which the chain is famous, and then branch out from there.

On January 14, 2014, Time magazine named the White Castle slider to be the most influential burger of all time. White Castle is the chain that made the hamburger the fastest food of choice for Americans.

If you’ve never been to a White Castle, which is a distinct possibility since it has traditionally been a Midwest and Mid-Atlantic chain, you may be wondering what the heck a “slider” is. It’s a very small burger, measuring 2×2 inches.

Back in the day, White Castle used fresh beef and fresh onions, but somewhere along the way, the chain switched to small, square, frozen beef patties that are steam-grilled atop a bed of rehydrated onions. 1951 saw the addition of five holes in the patty to facilitate thorough cooking, and the extremely thin patties do not require any flipping during the cooking process.

Because everything is steamed, what you end up with is a small mushy mass – so you need to kind of be ready for that consistency or otherwise you might be shocked by it. It’s okay, and it’s the way it’s supposed to be. If you like it, great. A lot of people do, and a lot of people don’t. If you do, these things can get pretty addictive, which is why the chain’s marketing slogan since 1994 has been “What You Crave.”

So clearly we’re starting off here with some major handicaps – frozen beef? Tiny square burgers? Steam-grilled patties? Rehydrated onions? A steamed bun? These are not the makings of a better burger. But you have to give the chain a break. After all, it invented the fast-food burger. It’s the granddaddy of them all. Here’s the run-down of what’s available for burgers on the White Castle menu:

As previously mentioned, there’s nothing in either the beef or the bun to get very excited about. But there’s something about their diminutive size that just makes them fun to eat. Plus, as one of the first really successful fast-food burger chains, there are a whole lot of Baby Boomers out there who have many fond memories of White Castle, so the nostalgia factor plays a big part here in the older generations.

The plain fact of the matter is that these are not good burgers. But they’re cheap and fun to eat. I mean, where else can you buy a sack-o-burgers? Seriously, if you’re on a road trip with kids, you can Buy ‘Em by the Sack, a paper bag with 10 sliders in it. Or you can go for the Crave Case, which looks like a cardboard attaché that has 30 sliders packed neatly into it. And if you want to go all out, you can get the Crave Crate, which is a giant cardboard box with 100 sliders in it.

To me, that just has FUN written all over it. You could be in a minivan with a half-dozen kids and have an eating contest on the road (okay, on second thought, that’s probably not such a good idea if anyone gets car sick).

And get a load of this – if you turn out to be one of the people who just loves sliders for whatever reason – you can probably find frozen White Castle sliders at a grocery store near you. You actually nuke these things in the microwave and they come out…awesome! You’ll be surprised how closely they resemble the real deal.

With only 5 burger options on the menu, White Castle felt the need to branch out into more sandwiches, so it now has 5 different chicken sliders and one fish slider. Here’s the skinny on their non-beef sandwiches:

The sides available on the White Castle menu are decidedly underwhelming. Here’s the run-down:

I don’t often get the chance to review desserts of fast-food chains, but White Castle is one that begs for it because two out of their three desserts are served on a stick. Like the tiny burgers, that just makes them fun to eat. And they’re pretty darn good, too. Here’s what you can get:

I also have to say I appreciate the fact that the shakes are part of the dessert menu. Far too many chains put them on the beverage section of the menu, which is a misplacement in my opinion. If you’re thirsty, no milkshake is going to quench your thirst, because a milkshake is not a beverage!

Many White Castle locations are open 24/7, which means part of their business is catering to the night owl crowd, which mostly consists of college-age late-night eaters, often those with post-partying munchies. That may be why the chain has recently revamped its breakfast menu, which some locations make available starting just after midnight. Here’s what you can get in the wee hours or during your morning commute:

Although White Castle menu prices do vary a bit by location, the menu is largely the same everywhere and has a few real hits on it, especially for the breakfast crowd. White Castle is a fast-food experience that everyone needs to have at some point, even if it’s only to pay respectful homage to the nation’s very first fast-food chain.

That’s when you can decide if you’re a fan or not, and people seem pretty evenly divided on that score. For many of the fans, White Castle represents a trip down memory lane, whether that’s to the 1950s for Baby Boomers, or to bleary-eyed late-night college munch-outs for more recent generations. Either way, it’s an experience you won’t soon forget.

Next post: FDD Talk: Our Latest Views on the Profit and Loss Statement for Franchised Rent-A-Wreck "Profit Group" Locations (2014 FDD)