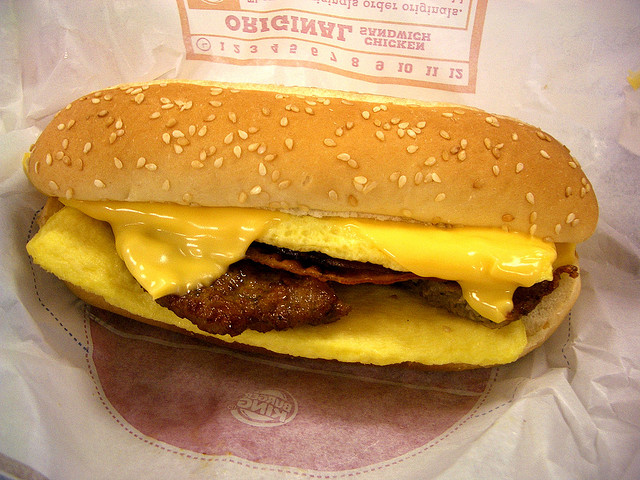 This Franchise Hot List was written by Laurie Swenson.

From a heart-attack omelet sandwich to a “no-kids-allowed” burger that made adults say “no,” fast-food restaurants have tried and failed more times than they have succeeded. When we see the longevity of favorites such as Big Macs and Whoppers on the McDonald’s and Burger King menus, we sometimes forget about the many menu items that have come and gone over the years.

The Arch Deluxe, marketed as a burger for grownups, had McDonald’s betting a reported $100 million or more in 1996 that the burger’s Dijon mustard-mayonnaise special sauce “for adults only” would make a billion dollars. Commercials showed disgusted kids refusing to eat the Arch Deluxe, and a grown-up Ronald McDonald weirdly golfing, bowling and playing pool, but adults didn’t warm up to the new spicy sauce themselves, so the campaign was largely a bust.

The Arch Deluxe started with a bakery-style bun with ketchup, topped by a quarter-pound beef patty, cheese, hickory-smoked bacon, a tomato slice, lettuce leaves, slivered sweet Spanish onions, and what was listed on McDonald’s website at the time as “chef’s sauce, a sassy Dijon mustard and mayonnaise blend.” McDonald’s also called it “A new ‘secret sauce’ for grown-ups.”

“Sassy” and “’secret sauce’ for grown-ups” are clues that the sauce is going to be spicy or harsh and not for everyone, including all adults. For most of us, it just wasn’t that good – certainly not good enough to risk $100 million on.

Breakfast may be the most important meal of the day, but Burger King really overdid it in 2005 when it launched its Enormous Omelet Sandwich, which piled a mess of eggs, bacon, sausage and cheese inside a huge sesame-seed roll that had to be held with two hands.

This gigantic breakfast sandwich boasted an enormous 330 milligrams of cholesterol – which drew the ire of nutrition-minded people – but even that was outdistanced two months later when Burger King added two slices of ham to create the Meat’normous Omelet Sandwich.


The Enormous Omelet Sandwich initially sparked a surge in Burger King’s breakfast menu sales, but it fell out of favor with customers who couldn’t justify having one breakfast sandwich provide more than the total recommended allowance of cholesterol for the entire day.

How guilty must you feel when you can’t make it to lunch, let alone dinner, before consuming the whole day’s worth of cholesterol? And how heavy does that sandwich feel in your gut to start the workday?

3. Jack in the Box’s Frings: Seriously, This Should Still Be a Thing

I want to know why Jack in the Box’s Frings (french fries and onion rings combined in the same order) failed. It seems like an ingenious idea to pair fries with onion rings, but it didn’t work for Jack in the Box.

Maybe it was just wrong for 1979, or maybe the fries didn’t measure up head-to-head to the rings, but the Frings fizzled out within a few years.

Maybe it’s time for a comeback, with regular fries or even with curly fries to give the two sides equal crunch. I mean, how many people haven’t waffled between whether to buy french fries or onion rings?

Wendy’s took on Subway and Blimpie when it launched its square Frescata deli sandwiches in April 2006, but they only made it until December 2007. They were unpopular in part because it took longer to put together the sandwiches than it did to slap a burger and condiments on a bun, but there’s also the notion that Wendy’s was trying to sell cold, reasonably healthy sandwiches at a burger place.

People go to Subway for a sub; they go to Erbert’s and Gerbert’s for a little sub — because that’s what these places are known for. When they go to Wendy’s, they’re usually after those famous square burgers. Well, and maybe some of that chili.

The original sandwich lineup featured the Frescata Club, Roasted Turkey and Swiss, Black Forest Ham and Swiss, and Roasted Turkey with Basil Pesto. The latter (which would have been my fave — anything with pesto!) was later replaced with the Chunky Chicken Salad Frescata, but nothing made Wendy’s customers crave cold sandwiches.

Our last menu item examines a mixed bag of disgust and delight, as well as illustrates that not every discontinued menu item really stays off the menu.

Sonic’s Pickle-O’s, batter-fried dill pickle slices, were originally on the menu back in 1968 but didn’t last. They’re often listed as a fast-food failure because they were brought back in 2003 but didn’t stay on the menu.

But if you dig a little deeper, you discover that Sonic’s 2003 reunion with the Pickle-O’s was actually a promotion to celebrate the fast-food restaurant’s 50th anniversary. Furthermore, the fried pickles are only sort of off the menu.

I’m not familiar with Pickle-O’s, but then I live in Minnesota, land of 10,000 lakes and only one Sonic restaurant. At first blush it seemed really weird to me to dip pickle slices in batter and fry them up. But if you do a Google search for Pickle-O’s, you’ll find numerous Sonic restaurants that still have them on the menu or sell them off-menu. They are beloved by many Sonic customers. You’ll even find a bunch of recipes to make your own.

If you haven’t tried fried dill pickle slices yet (and I have not), maybe you just have no idea how delicious they are. I’m sure you’d like them better than the Minnesota Scandinavian delicacy of lutefisk (codfish soaked in lye), which I can pretty much guarantee will never make it on a fast-food menu.

These are just a few fast-food dishes that didn’t make the cut to be on their restaurants’ regular national menu. Many other burgers, sandwiches, sides and other offerings have suffered the same fate. What do you hope never comes back, or wish you could taste again?