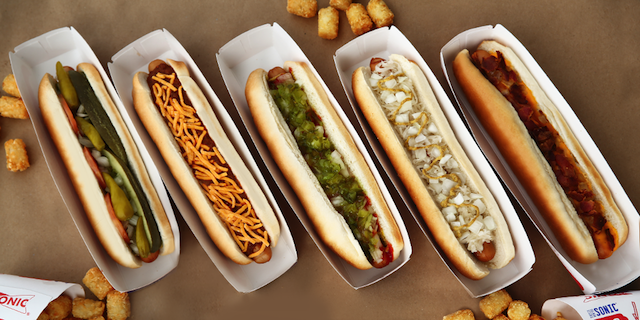 This Franchise Chatter guide on the SONIC Drive-In menu was written by Sherman Morrison.

Troy Smith got his start in the restaurant business back in 1953 with a small root beer stand in Shawnee, Oklahoma, called Top Hat. He began experimenting with the idea of a controlled-parking drive-in over the next several years, which boosted sales significantly. In 1956, Charles Pappe joined the operation and opened the first franchised location in Woodward, OK.

With a handful of locations in 1959, they discovered that the Top Hat name was already trademarked, so they renamed their chain SONIC, with the slogan Service at the Speed of Sound. SONIC is a drive-in fast-food restaurant where patrons pull into covered drive-in stalls, place orders through an intercom speaker, and wait for the food to be delivered to their cars by carhops, often on roller skates. Many locations feature patio seating as well as drive-thru service.

Now with the slogan Amerca’s Drive-In and headquartered in Oklahoma City, there are more than 3,500 SONIC restaurants in 44 states.

The SONIC menu consists of such staples as hamburgers and French fries, but also features a selection of more carnival-like food in the form of onion rings, corndogs and chili hotdogs. The chain also allows for the combinations of various beverages and flavors, resulting in thousands of options for drinks.

Because SONIC menu prices can vary by location, I’ll be focusing on the quality of the chain’s food. I’ll start with their burgers and branch out from there.

I’ll just note that many of the better-burger chains I’ve reviewed make a point of mentioning that their beef is not only 100% beef, it’s also usually 100% American. That particular descriptor is noticeably lacking in the SONIC Drive-In menu, so if that’s important to you, I have no idea where the chain’s beef is coming from. It could be American, but they don’t specify that, so who knows.


Here are the nine different burgers on the SONIC Drive-In menu:

It’s worth noting first that all the patties on SONIC burgers are standard quarter-pounders. These are good-sized burgers that compare in size to a Burger King Whopper.

The beef itself is nothing to write home about. It’s neither particularly juicy, nor is it overly dry. It’s hard to tell what the chain is doing as far as seasoning. If you take a patty out and really examine it, you’ll find it has a kind of grayish tone that does make you wonder about the quality of the beef. It seems to approach a suspiciously industrial quality that is often encountered in big-chain burgers.

The nice big, meaty strips are just as crispy and curly as good bacon should be. SONIC’s bacon is the real deal, making their three bacon burgers the best on its menu.

So what else does the SONIC menu have that’s worth reviewing? I’m glad you asked. Keep in mind that this is a franchise, so there can be a good deal of variation from location to location.

When SONIC gets its onion rings right (which isn’t always the case), they are a thing of beauty. The SONIC French fries, however, are no good, I’m sorry to say.

However, if you’re the kind of person who needs potatoes with your meat, you’re not out of luck yet because SONIC has Tots (meaning tater tots – those deep-fried cylinders of grated potatoes you probably remember from elementary school lunches). They’re really quite good – and even better when you get them topped with chili and cheese.

The surprise story from SONIC is their hot dogs. In a word, they’re awesome. Their chili cheese dog (a grilled 100% beef dog) may very well be the best of all the chains. If you find you like it as much as most do, then you might want to take on the Footlong Quarter Pound Coney (although the coney is not a beef dog). Be forewarned, however, that this dog is HUGE – plenty for two people!

And it’s here in the chain’s hot dog menu that you’ll find more limited-time offers than other parts of the menu.

If you’re daring, you can try something really different, like the Chicago Dog. This is a beef hot dog made with 100% pure beef and topped with pickle relish, tomato, sport peppers, celery salt and mustard all served up in a soft, warm poppy seed bun. With the Chicago Dog, you need to know that the whole sport peppers bring some serious heat to the equation, so be prepared for a runny nose!

SONIC gets this dog right by including all the traditional toppings this style of dog should have. But all those toppings, not to mention the poppy seeds, make this dog a bit of a mess to eat. The peppers want to keep sliding around – don’t attempt to eat this one while driving!

Another one worth trying is the New York Dog. This is another 100% pure beef grilled dog topped with spicy brown mustard, grilled onions and crunchy sauerkraut in a soft, warm bakery bun. Once again, SONIC gets the toppings and condiments right.

You’d never put yellow mustard on a New York Dog – spicy brown only! However, SONIC’s version of brown mustard is not the greatest. In fact, it kind of feels like it’s been diluted with yellow mustard. That would be a big no-no.

The sauerkraut is a must on a New York Dog, but here again, SONIC’s version doesn’t quite stack up. It lacks the tangy zing that sauerkraut should have, as well as any crunch.

In the final analysis, the actual dogs themselves really aren’t the highest quality dogs around, but with all the different toppings you get on the ones I’ve mentioned, it doesn’t really matter.

And that’s definitely the case as well with the most carnival-like offering – the classic corn dog. This is a hot dog dipped in sweet corn batter and fried to a crispy golden brown, served on a stick. And the chain is well-known for frequently offering them at just 50 cents each. If you’ve never had a corn dog, you owe it to yourself to try one at SONIC for a true slice of Americana nostalgia.

At SONIC you can also get dogs in pretzel buns, if you’re into that sort of thing, and I, for one, am all about the pretzel buns.

While SONIC Drive-In menu prices may vary by location, this chain’s menu has some really unique and rather tasty offerings from which to choose. I think the bigger question for me is how the chain succeeds when it’s based on people eating meals in their parked cars. While that may work well for passengers, it’s a real drag for the driver, given that the steering wheel gets in the way of eating in comfort.

Still, for those who go for the whole skating-carhops throwback effect, the SONIC Drive-In menu has plenty to keep your taste buds busy.