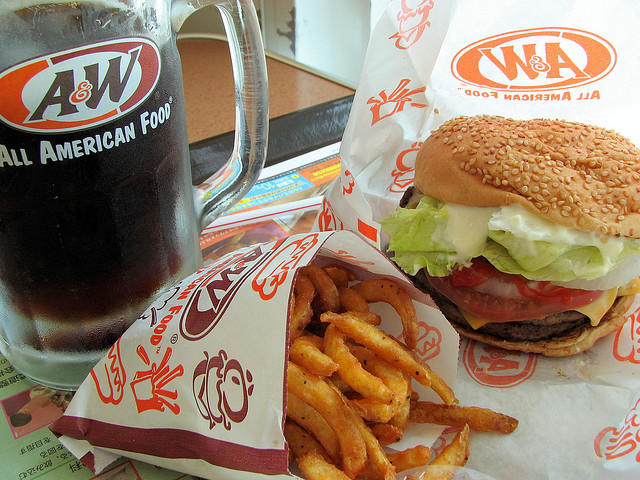 This Franchise Chatter guide on the A&W menu was written by Laurie Swenson.

When it comes to originality on the A&W menu, it all started with a mug.

A&W Root Beer is the root – literally – of the A&W restaurant, going back almost a century to 1919, when Roy W. Allen opened a roadside root beer stand in Lodi, Calif. Allen, who had purchased the beverage’s formula from a pharmacist, sold the delicious root beer for 5 cents a mug.

The A&W name came from the initials of the last names of Allen and Frank Wright, who partnered in 1922 and opened the first A&W carhop restaurant in 1923 in Sacramento. Allen bought out Wright in 1924 and expanded to more locations in the first drive-in restaurant franchise operation in the United States.

A&W’s differences from other fast-food restaurants are many.

First, you have the iconic draft root beer on tap, mixed at each restaurant from a proprietary blend that includes herbs, bark, spices and berries. It’s still served in heavy glass mugs for customers dining indoors. (If you want a glass mug but wish to drink some root beer on the road, ask if you can get a paper cup to fill on your way out. The road is long, and A&W Root Beer is so good.)

A&W Root Beer became so popular that it found its way to supermarket shelves in cans and bottles, starting in 1971. It’s not the same formula as what you’ll drink in the restaurants, and not nearly as good as a frosty A&W, but it’s still one of the best bottled root beers.

In US, Papa Stands Alone on A&W Menu

The Papa Burger is a nod to sandwich names gone by, when the A&W family, introduced in 1963, included the Papa Burger, the Mama Burger, the Teen Burger, and the Baby Burger. The sandwiches were represented by their respective A&W mascots, which were turned into statues at some restaurants.

But alas, that era has passed in the United States. If you want to eat a burger called Teen or Mama or Baby now, you’ll have to go to Canada, where A&W is a completely separate entity from its American neighbor. There, you can still experience the Canadian version of the A&W family (although with Miracle Whip (!) instead of Papa Sauce, among other differences), which has grown even more. Grandpa, Uncle and Buddy burgers have been added for extended-family variety.

If you can make it to franchises in both countries, it’s a worthy adventure to check out the differences, among which are the addition of a veggie burger and the Quebec-favorite side dish of poutine – french fries, cheese curds and gravy. If you’ve never tried it, you’re missing something fantastic (Quebec and non-Quebec A&W locations serve slightly different recipes). It may be fat on fat on fat, but poutine is an indulgent combination that’s nice to have now and then.

According to the Canadian A&W menu, poutine has roughly 600 calories with 60 grams of carbohydrates, 35 grams of fat, 65 grams of cholesterol, and 1,700 milligrams of sodium. And that’s for a side dish.

Don’t Mess With an Icon

It says something that the American Papa Burger is, with the exception of a bit more ground beef and a butter-toasted bun instead of a sesame-seed bun, the same burger that fans flocked to buy decades ago. Some sandwiches just don’t need to be changed much. The Papa Burger is a good, hearty, flavorful burger; a trusted stalwart of a sandwich.

The Teen Burger was the sandwich of my youth, when my friends and I would hang out at the A&W in our cars. The Original Bacon Cheeseburger is still my go-to sandwich at A&W today. It’s a super-juicy burger, made even better by that hickory-smoke bacon and stacked high with everything else.

If you’re wondering why these bacon burgers are tagged with the word “Original,” it’s because A&W invented the bacon cheeseburger. Yes, the famed Teen Burger in 1963 was the first bacon cheeseburger on the restaurant scene. A&W is quite the pioneer!

The Papa Burger weighs in at 550 calories and provides 33 grams of fat, 91 grams of cholesterol and 1,558 milligrams of sodium, which fits snugly into the 1,500 to 2,300 milligrams recommended for most individuals for the entire day.

A&W rounds out its burger offerings with its basic cheeseburger and hamburger. If you’re a baby boomer and really want to feel a nostalgic connection to the burger family, you could consider these the Mama Burger and the Baby Burger, but I’d say Mama got shorted here, since both burgers come only with ketchup, mustard and pickles.

A&W’s tagline is “All-American restaurant,” and you don’t get much more American than the stalwart hot dog, which doesn’t tend to be a common fast-food menu item.

At A&W, however, you can order a regular, no-frills hot dog or step up to the A&W Coney Dog, topped with A&W’s signature chili sauce and sweet onions. Add creamy cheese sauce, and you have the Coney Cheese Dog. It’s a nice hot-dog lineup with good options, and the choices are low in calories at 310 to 340.

The dogs don’t stop there; they only get more interesting, with the Corn Dog Nuggets, delectable bite-size chunks of corn-dog-off-a-stick that are available at participating locations in five- and 10-piece sizes. Corn dogs are literally the only thing I eat ketchup with, a throwback to years of county fairs, but these nuggets are good with other sauces as well.

Look to the A&W menu’s side dishes for more food choices you won’t find at most fast-food spots. A&W seems to pay a lot of attention to this section of the menu, setting itself apart from the competition with excellence across the board as well as originality.

Let’s start with the sought-after cheese curds, which feature Wisconsin cheddar cheese with light breading, fried to crispy golden nuggets of awesome. The cheese curds come at a cost, though; as a side dish, you’ll add 570 calories, 40 grams of fat, 105 grams of cholesterol and 1,220 milligrams of sodium to your meal. It’s probably not a great idea to pair these with the Original Bacon Double Cheeseburger.

Of course, you can get french fries and onion rings at A&W, but you can also order chili cheese fries with their generous helping of chili and cheese sauce. For a flavor boost with any of these sides, order some Spicy Papa Sauce. French fries range in calories from 201 to 430, with chili cheese fries providing 410 calories, and an order of onion rings has 350 calories.

If you’re tallying up nutritional data, don’t forget about the Papa Sauce, which adds on 172 calories, 15 grams of fat and 20 grams of cholesterol. Restaurant “secret recipes” on the Internet generally compare Papa Sauce to Thousand Island dressing and approximate the ingredients as mayonnaise and red hamburger relish, or mayonnaise, ketchup, dill pickles, garlic powder and black pepper, so it’s the mayo that piles on the calories.

Some A&W franchises offer unusual sides such as breaded fried cauliflower, which is a real treat for cauliflower lovers, and some of the tastiest sweet potato fries around. Check with the franchises in your area to find out what food items they may offer that diverge from the main menu. It’s always fun to try new dishes at places you thought you knew!

The A&W menu always left some room for franchise owners to make available local and regional favorites or simply put something different out there. One restaurant recently put up a daily special of pulled pork on a bun with fries and a drink. The same restaurant also advertised shrimp baskets and lasagna soup. Sounds like there’s something for everyone at most A&Ws.

On the Sweet Side

The signature root beer isn’t the only beverage that’s famous at A&W, which is also renowned for its to-die-for root-beer floats. You’re probably well aware that you can pair A&W Root Beer with soft-serve vanilla ice cream for a delicious Famous Float at A&W. But not quite as ubiquitous is the Freeze, which blends root beer and ice cream for a smooth, rich dairy treat.

If you’re counting calories, you’ll find menu items with the highest numbers in this category, where the standard A&W shake can tack on 900 calories in a 20-ounce size. You’ll also get 820 calories from a 32-ounce Freeze. The root-beer float ranges from 330 to 640 calories, depending on size, and you can cut that down to 170 to 350 with diet soda, which can also bring the Freeze calories down to 260 to 600.

If you want something deliciously indulgent, try the very rich Polar Swirls, which stir your choice of treats like Oreo Cookies, M&M’s, Reese’s Peanut Butter Cups or chocolate chip cookie dough into ice cream for a 12-ounce indulgent treat that ranges from 690 to 740 calories.

If you’re looking to cut calories while still enjoying a treat, try a float or Freeze with diet root beer, or go for the basics with an ice-cream cone (200-260 calories) or a small sundae (300-350 calories).

If you have to have a Famous Float with real famous root beer instead of the diet variety – which is perfectly understandable – a 16-ounce float has 330 calories, with 350 calories in a 20-ounce size.

A&W Restaurants aren’t the same as when they started. They still draw people with their historic root beer and burger lineup, but most no longer are drive-in restaurants with carhops who bring your food on trays to your car.

If you’re fortunate enough to live near an A&W where you still order from the A&W menu with your own call-in button and someone still comes to your car door and slips a tray of food snugly over your rolled-down window, take advantage of this rare treat, whether it’s something you remember from childhood or not. It won’t be around forever. And while you’re at it, go see a drive-in movie. There aren’t many of those left, either.