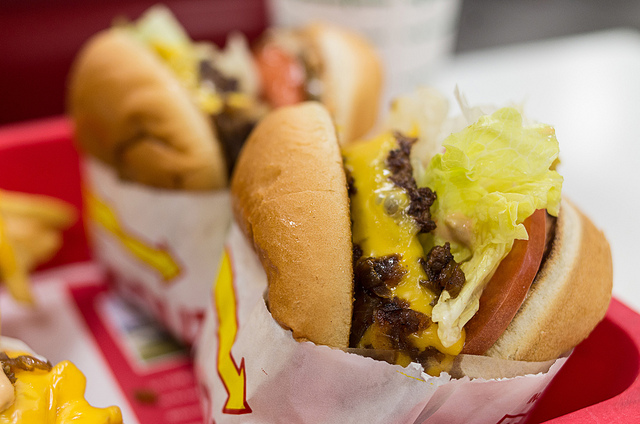 This Franchise Chatter guide on the In-N-Out Burger menu was written by Sherman Morrison.

In-N-Out Burger is one of those chains that has gained a cult-like following in the places where it operates. Right now that’s a fairly limited area out West, in California, Arizona, Nevada, Utah, and Texas. Although it’s not well-known outside those areas, it actually got its start back in 1948 when Harry and Esther Snyder opened store #1 in Baldwin Park, east of Los Angeles.

They barely had 10 square feet of space from which to operate California’s first drive-thru hamburger stand, so Esther handled the accounting from their nearby home. Harry would visit the produce and meat markets every morning to grab the freshest ingredients possible – a commitment to quality that carries through even to this day as all stores are located within a day’s drive of a regional distribution center.

And you can count on consistency among the locations because the chain has resisted franchising.

Harry passed away in 1976 at the age of 63 and with 18 store locations, handing the reins to his sons, Rich and Guy Snyder, as President and Vice President respectively. In 1979, the chain began building stores that featured in-store dining areas, which then became the norm.

Today the company remains privately held and is now owned by Lynsi Snyder, Harry and Esther’s only grandchild, who serves as the company’s President. Currently headquartered in Irvine, CA, the chain boasts more than 18,000 staff and 300 locations with the opening of store #300 in Frisco, Texas, in 2015.

In-N-Out is also committed to its employees, and consistently pays its workers more than either the state or federally mandated minimum wage. In California, that means workers start out making $10.50/hour.


Back in 1948, not using car-hops to take orders and deliver food was a new idea, and people loved the two-way speaker system for placing orders. The mission was simple, “Give customers the freshest, highest quality foods you can buy and provide them with friendly service in a sparkling clean environment.” That’s how In-N-Out Burger still operates today.

But does the In-N-Out menu really offer anything different? What can you expect in terms of quality, and why does the chain enjoy a cult-like following? In-N-Out Burger menu prices can vary by location, so this article will focus on the quality of the chain’s menu offerings, focusing on their burgers, fries, and shakes.

All the burgers feature 100% American pure beef without any additives, preservatives, or fillers, never frozen and never pre-cooked. All their buns (without seeds) are toasted, and freshly made from old-fashioned, slow-rising sponge dough.

First I’ll just describe the burgers, then I’ll get into sharing some opinions about them. Here’s the selection of burgers:

The next five burgers don’t appear on the in-store menu, but they’re all available at every store, being part of the chain’s not-so-secret “secret” menu:

If a 3X3 or 4X4 sounds excessive to you, keep in mind that these are not super-sized patties. In-N-Out burgers are actually pretty small relative to other “better-burger” chains. Five Guys has 3.3 ounce patties and Shake Shack does 4 ounces.

One of the nice things about In-N-Out is that they toast their buns deeply enough that they don’t immediately get soggy from burger juice. That’s not something most chains can boast.

They come out better than Five Guys buns because Five Guys wraps their burgers in foil, which means the bun gets immediately steamed and comes out a bit squishy, usually resulting in bun failure at some point when you’re eating it.

Shake Shack uses Martin’s potato rolls, which is an awesome choice – they’re hinged and toasted in butter, so they work both logistically to hold everything together and taste awesome. Shake Shack wins the bun contest, but In-N-Out is a very close runner-up.

A word about the cheese: Awesome. This is very thickly sliced American cheese, so if you’re one of those people who doesn’t like the cheese to be dominant, you might have a problem with this. As for me, I love my burgers to be dominated by cheese. I can’t even eat a plain hamburger. What’s the point when there’s so much cheese in the world?

One of the first questions people have about In-N-Out burgers is what is this mysterious “spread” they put on them. It’s basically a variation of a Thousand Island-style dressing.

Be forewarned that In-N-Out burgers do not come with the standard ketchup and mustard, only the spread. As un-American as that seems, you should try it. You might just never go back to the old way. Then again, you may hate it. As they say, there’s no accounting for taste!

Personally, I love it. It’s different, and different is often good. I do think it’s better than the special sauce you get on a Big Mac – In-N-Out’s spread has a bit more tang to it.

Another question is what does it mean that the “animal style” patty is mustard-cooked? It’s a simple process where the chef cooks the first side of the burger, but before flipping it squirts some mustard onto the patty so that the grill sizzles it right into the meat. It does make for one tasty burger!

And this is what you have to keep in mind with In-N-Out. If you go for relatively paired-down burgers, they’re just not that special in terms of the patties or cheese. Where they do shine, though, and where they have a clear edge over the usual fast-food national chain suspects is in the toppings – they really are incredibly fresh, and it makes a substantial difference in giving you a full-flavored burger experience.

If you do like onions on your burger (I usually don’t), do yourself a favor and opt for the grilled onions. They’re grilled to a nearly jam-like quality in the meaty juices on the grill. I never like fresh onion on a burger because it tends to become the dominant flavor, and don’t even usually like grilled onions either, but the In-N-Out version of grilled onions is quite possibly the best you’ll taste anywhere, and a fine addition to any of their burgers, complementing the meat rather than competing with it (and winning).

In-N-Out’s French Fries are freshly hand-cut and fried in 100% vegetable oil. They can also be obtained in Animal Style, which means the addition of two slices of melted American cheese, the chain’s spread, and grilled onions on top.

That might cover up the fact that In-N-Out fries are, in a word, terrible. It’s lovely that they’re fresh-cut and all, but they only fry them once, and everyone knows that the secret to great fries is double-frying (like McDonald’s).

One of the many super-secret menu hacks you can do at In-N-Out is specify how you want your fries done. I find their regular fries kind of limp and soggy.

You can ask for them to be well done, which means they leave them in the fryer longer, but without a rest in-between fryings, as happens in double-frying, they just don’t come out right. Rather than being crispy, they’re more like crunchy and dry on the outside and a bit mealy on the inside. Blech!

And if for some reason you wanted to, you can ask for your fries light, which means they’re practically going to be raw at the core. Yuck! There are people who do in fact rave about In-N-Out fries, but I think their heads should be examined. McDonald’s fries are way better.

There are three basic choices in milkshakes, including vanilla, chocolate, and strawberry. Although it’s not listed on the store menu, every location also allows you to order a Neapolitan shake, which is a mix of all three flavors. The chain will also honor a request for a black-and-white (chocolate and vanilla together).

The chain says their milkshakes are made with “real” ice cream, but it’s soft serve, which simply doesn’t compare to premium hard ice cream in my book.

I detect a kind of slightly synthetic taste in my opinion, at least at first. It’s fine, it’s just not stellar. The vanilla has some kind of interesting overtone flavor which reminds me a little of French Vanilla, or maybe it’s a hint of butterscotch. I’m not sure, but it does grow on you.

If you’re like me, you’ll opt to finish the shake while leaving more than a few fries uneaten.

The chain is surprisingly accommodating to special requests, and these would qualify as options on the super-duper secret menu, which you won’t find in the store or on the website:

The most inevitable comparison is between In-N-Out Burger and Five Guys Burgers and Fries, although up-and-coming Shake Shack can be in the running as well. The former is on the West Coast and the latter two are on the East Coast. That’s enough to call it right there for some people who grew up on one coast but have been transplanted to the opposite coast – the nostalgia factor keeps them fans of their childhood chain.

And although I don’t usually talk about menu prices because they vary by location, it is worth mentioning that some would call any such comparisons wrong because they’re in such different pricing categories. For the price of just one fully loaded double burger at Five Guys, you can get an In-N-Out Double-Double meal with the fries and a drink.

Another reason some balk at the comparison is that at In-N-Out you’re dealing with a very simple, largely set-in-stone menu, whereas at Five Guys, you have much more control over what goes into/onto your burger.

In the final analysis, you’ll just have to try each and see which one suits you best.