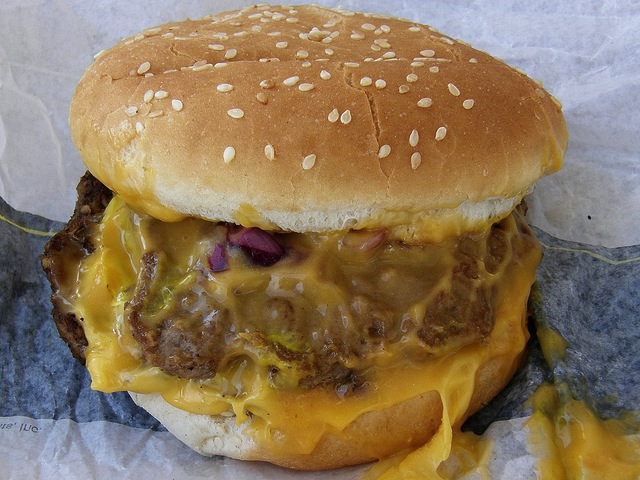 This Franchise Chatter guide on the Checkers and Rally’s menu was written by Sherman Morrison.

The story of how the nation’s two largest double drive-thru burger chains, who used to be engaged in cut-throat competition against each other, came to be one is quite fascinating.

When Alabama native James E. Mattei dabbled in Wendy’s franchises in addition to his real estate development activities, he quickly observed that at least half of his fast-food business was coming via the drive-thru, and that most of the orders were for burger combination meals.

His idea was to pare down a fast-food operation to focus on just those things, which meant big savings by eliminating dining rooms, big parking lots, and complex menus. Thus, Checkers was born in 1986, with the first location in Mobile, Alabama.

Meanwhile, a year earlier, in Louisville, Kentucky, the first Rally’s opened, with a very similar double drive-thru concept that only offered very limited seating inside the restaurant.

Both chains served to shake things up in the burger market, offering lower prices than the big four (McDonald’s, Burger King, Wendy’s, and Hardee’s) due to their lower overhead. This created a price war that consumers loved, but many restaurants found it hard to compete in that environment.

After the fall-out, Checker’s opted for made-to-order burgers rather than the pre-fabs offered at the big chains, and in the mid-1990s, they also worked out a big geographic non-compete deal with Rally’s so they wouldn’t be hurting each other.

Finally, in 1999, the two companies realized it would make the most sense for them to join forces into one double drive-thru behemoth. Now headquartered in Tampa, Florida, the combined Checkers and Rally’s operation has more than 800 locations in 28 states and Washington, DC.

Rally’s locations took on the Checkers look with the bold checkerboard squares, red neon signs, and chrome styling on their small modular buildings. With the exception of the name on the signs, the Checkers and Rally’s menu offerings, as well as their look, are the same.

Because Checkers and Rally’s menu prices vary by location, this article will focus on the quality of their food in their two primary menu groupings, burgers and fries.

Checkers and Rally’s offer 17 different burgers. Because most of them are just slight variations of each other in terms of toppings and number of cheese slices, I’m just going to list them all with their essential features, then go more in-depth into some of the more interesting offerings.

In general, I think most people find that the burgers from Checkers and Rally’s are definitely a step above the usual big-chain suspects, but come nowhere near the higher-end “better burger” chains like Five Guys Burgers and Fries or In-N-Out Burger. The Checkers/Rally’s burgers are just not tasty or fresh enough to compete with either of those chains.

Of course, this is a franchise, and there’s always going to be variation from one location to the next, but the variation at Checkers/Rally’s always seems to be towards the bad end of the spectrum.

The most common reaction is this: As a burger joint, their fries are pretty good, as long as you eat them before they get cold (more on that below). That doesn’t say much for the burgers, does it?

Despite their claim that the burgers are both “seared” and “seasoned,” most of the time you’re left wondering where is all that flavor? You might even wonder if they’re even cooked on a grill at all – they have a suspiciously steamed quality to them.

As you’ll see in the listing above, many of the burgers come with lettuce, which is always a disappointment. This is shredded iceberg lettuce, and besides adding no flavor whatsoever, it also tends to fall out of the burger before you even get into it.

What’s worse is that the most identifiable trend in the Checkers/Rally’s burger experience is your likelihood of getting a burger that is not served hot. In fact, it is often the case that any slices of cheese added won’t be melted.

This is not the case with most of their bacon burgers, which suggests that at least the bacon is put on the burger while still piping hot. This is also not the case when you get a burger that seems to have a cheese sauce put on it rather than slices of cheese. This is sometimes the case when you have one of their cheddar cheese burgers, though not always, which is a real mystery.

The standard bun at Checkers/Rally’s is a sesame seed bun, though a few of the burgers come on toasted sourdough (the American Double Melt and the Bacon Roadhouse). Their buns are not usually toasted, which means they can get pretty soggy pretty quickly, and even when the bread is supposed to be toasted, it often isn’t, which is always a disappointment. The sourdough, even when toasted, comes out feeling like nothing other than super-dense white bread.

A few of these burgers deserve special mention, although not because they’re especially good, unfortunately. Take the Fry Lovers Burger, for example. There are people who like to put fries on their burgers, and I’ll have to admit I’m one of those people. But to make that worthwhile, you need to really pile a good amount of fries on it.

When you look at the promo picture for the Fry Lovers Burger, it looks like they’re getting it right. But when you do get the burger, you’ll be lucky if there’s even six fries on it. Not exactly satisfying. Of course, if you’re smart enough to get an order of fries with it as well, you can rectify that oversight yourself.

The big question is this: How can the Fry Lovers Burger taste essentially the same as the chain’s regular cheeseburger? Another mystery to ponder…

The other burger that gets attention is the Bacon Roadhouse. Again, the meat comes out as flavorless and without any char whatsoever, making one wonder if the patties are really even seared or seasoned at all. The BBQ sauce is weak and does little more than add a bit of sweetness and make the whole thing a sopping wet mess. The “onion tanglers” (fried onion rings) don’t come out crispy at all, and once again the cheese seems suspiciously more like a cheese sauce than melted slices of cheese.

There’s a lot that tends to go wrong with Checkers/Rally’s burgers, and even accounting for variation among franchise locations, it seems that most people have relatively disappointing experiences with them.

Of course, you could always opt for the BLT – lacking any patty whatsoever, you won’t be underwhelmed by it!

Checkers/Rally’s makes the audacious claim that their fries just might be the best on Earth. Personally, I don’t think they should be making that claim.

First of all, I don’t want my fries battered or coated with anything. Not only are Checkers/Rally’s fries battered, they are then seasoned with some kind of blend that’s pretty heavy on the pepper, which is not my favorite.

Still, they are tasty, but I have trouble figuring out the chain’s cult-like following that praises these fries.

Try keeping track of how many you throw away because they don’t even look like they’re worth eating – the little stubs that are either burnt and too hard or too soggy. I think you’ll find that the ratio of throw-aways with Checkers/Rally’s fries is far greater than you’ll get with any other fast-food chain.

They aren’t too bad if you eat them while hot, but as soon as they cool down (which happens quickly), they become soft and soggy and incredibly greasy.

So one way to do something about this problem is to dump something on top of them to hide their deficiencies. Here’s the run-down of what you can get on your fries at Checkers/Rally’s:

If the fries just don’t do it for you, you can also get their “onion tanglers” (onion rings) or their Fry Seasoned Monsterella Stix (Mozzarella sticks with their fry seasoning applied). Both are pretty standard, and nothing to write home about.

I’d like to say that the mediocre-at-best menu offerings from the Checkers/Rally’s menu are rectified by stellar customer service, but that’s just not the case. It’s a drive-thru, after all, with extremely limited seating inside, if any at all, so there’s no real chance to have any kind of deep interactions with the staff.

The ordering process is fast, which is good, but other than that, you’re probably not going to find anything that distinguishes them in a way that makes you want to go back, except for pricing.

Checkers/Rally’s menu prices too often represent a temptingly low expense. They are known for offering burgers at just $1 during many promotions. Even there, however, you’re bound to be disappointed. You can often only get that $1 price if you’re ordering three different sandwiches, and if you’re by yourself, you don’t want to eat that much mediocrity.

One of the things I find most annoying about the Checkers/Rally’s menu is that although it offers no fewer than 17 different burgers, they don’t seem to get any of them right.

A lot of those choices are just tinkering with small adjustments in the number of slices of cheese (when it’s even slices to begin with) or the combination of toppings. All the burgers come out on the small side, and all 17 are really variations on the same mediocre burger. There’s nothing to get excited about here.

The Checkers/Rally’s menu is one that offers you ample opportunity to give it two thumbs down, which is probably the most likely outcome you’ll experience when you eat there.