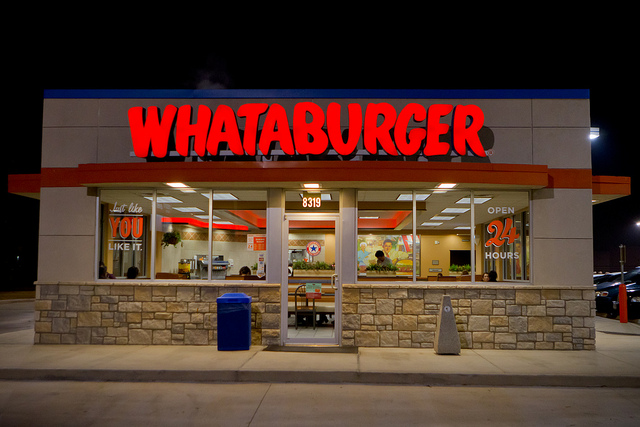 This Franchise Chatter guide on the Whataburger menu was written by Sherman Morrison.

Harmon Dobson had a dream more than sixty years ago – to serve up burgers so big you’d need to use both hands to really get a grip on them. He also wanted them to be so good that customers would naturally exclaim, “What a burger!”

He started his first burger joint in Corpus Christi, Texas, back in 1950, and by the end of the decade opened location #21 in Pensacola, Florida, which was the first outside of Texas. Today, the chain is still family-owned and family-operated, with more than 750 locations distributed among 10 southern states.

In 1967, Harmon Dobson was killed in a tragic plane crash, but his wife Grace took the business over and kept it going. It wasn’t until 1993 that one of the three sons, Tom, took over as president and CEO from Grace, who then passed away in 2005.

After hurricane Ike in 2008, the company made preparations to move its corporate headquarters to San Antonio, where it remains today.

Whataburger has a rather extensive menu, so this article will focus on just two of the chain’s primary sections of offerings – Burgers and All-Time Favorites. Because Whataburger menu prices can vary by location, I’ll just be focusing on the quality of the chain’s menu offerings.

Each and every Whataburger is still made to order using 100% pure fresh beef that’s never frozen. The burgers are served on big, toasted five-inch buns. If you don’t specify anything, every Whataburger comes with mustard, lettuce, tomatoes, pickles and diced onions.

Whataburger. The basic burger works really well. The size is great – definitely bigger than the Wendy’s double-stack, but maybe not quite as big as a Whopper. The toppings are all very fresh and help the burger be much better than it otherwise would be.

As far as the actual meat, nothing is all that special about it. The patties are not as juicy as you might want them to be, but the toppings and condiments let you gloss right over that.

This burger is also available on the menu in a slightly smaller size for smaller appetites, called the Whataburger Jr.

Double Meat Whataburger. There’s not much to say about this burger as it’s pretty much the same as the basic burger with the addition of a second patty. This doesn’t necessarily make it a better burger. Doubling less-than-spectacular meat means that it starts to get out of balance with the normal array of toppings.

This can also be had in a kids size, called the Double Meat Whataburger Jr.

Triple Meat Whataburger. The problem mentioned with the double meat version is obviously even worse when you triple the meat. You definitely need to add some additional items like cheese or jalapeños or bacon to make this burger worthwhile.

Jalapeño and Cheese Whataburger. This is the version where Whataburger begins to really shine in comparison to many burger chains – the addition of jalapeños and cheese really helps to create a mouth-watering burger that really does make you say, “What a burger!”

Bacon and Cheese Whataburger. Most people agree that bacon makes everything better, and this is no exception. Whatever negatives may exist in a standard Whataburger patty, they are nicely covered over with the bacon and cheese. Although this is one of the chain’s best offerings, it still can’t hold a candle to the Five Guys bacon cheeseburger.

Avocado Bacon Burger. Now this one is a relatively recent addition to the menu as of 2013. You also want to know ahead of time that this one is not delivered on their signature 5-inch bun. Instead, it comes on Texas Toast. Once you get past that shocker (if you’re unprepared for it), you’re in for a real treat.

In my opinion, avocado makes everything even better than bacon, so with both avocado and bacon, it simply doesn’t get any better than this.

If you’ve tried sandwiches or burgers at other places that use guacamole, using the straight-up avocado is better, by a long shot. Why? I suspect that some chains offering guacamole on subs or other sandwiches aren’t using super-freshly-made guacamole. And it’s probably loaded with preservatives and other nasty stuff.

Whataburger avocado is cut up and mashed into a spread-like consistency, so with the onions and tomatoes that come with the burger, you end up with something close to guacamole anyways – and it’s fresh.

In the final analysis, the Whataburger basic burger lineup is definitely a good step or two above what you get at the Big Three (McDonald’s, Wendy’s, and Burger King), probably right on par or slightly better than a chain like In-N-Out, but does not rise to the standards set by such better burger chains as Five Guys Burgers and Fries or Smashburger.

Why this section of the menu is called “All-Time Favorites” is a mystery to me. Four of these sandwiches are burgers, so they should just be listed in the burger section, while the remaining sandwich is chicken, so it should go into the chicken section.

What’s on this section of the menu, however, are some very tasty offerings as follows:

For a patty melt to be successful, the Texas Toast has to be thick enough to hold up to everything in the sandwich. Whataburger’s toast doesn’t quite measure up to the demands of this sandwich. Between the grilled onions and the Creamy Pepper Sauce, the toast turns soggy pretty quickly, which can result in the meat wanting to fall through the bread. Not a good thing.

Other than those logistical problems, the taste is good, but a more flavorful cheese might be even better (like cheddar or pepper jack).

Monterey Melt. This one gives you two beef patties, melted slices of American and Monterey Jack cheese with a blend of grilled peppers and onions, topped off with jalapeño ranch dressing. This ends up being very similar to the Jalapeño and Cheese Whataburger. The only differences are the Texas Toast instead of a bun, and jalapeño ranch dressing instead of real jalapeños.

It’s a great-tasting burger, to be sure, but do you really want to eat a single sandwich that contains 79 grams of fat? That’s a bit over the top. It packs the single biggest fat-punch of any item on the Whataburger menu.

Chop House Cheddar Burger. This burger includes two beef patties, bacon, grilled onions, shredded cheddar cheese, and topped with the chain’s own Creamy Steak Sauce. Here’s the thing about this burger – it’s not really sufficiently different from the A.1. Thick & Hearty or the Patty Melt to be a distinct offering. That said, it’s a very solid menu item. Most of the time you’ll find yourself wishing there were just a little more sauce on it, which seems to be a trend with Whataburger sandwiches.

Honey BBQ Chicken Strip Sandwich. This sandwich has been on and off the menu since 2005 (currently it’s on). It consists of three 100% chicken breast strips, Honey BBQ Sauce, and two slices of Monterey Jack cheese on your choice of Texas Toast or a toasted five-inch bun.

The chicken tends to come out a bit dry, which is fine as long as there is a sufficient amount of BBQ sauce on it, which may or may not be the case. Be forewarned that this sandwich is a real gut-buster: 1,030 calories, 55 grams of fat, and an astounding 2,430 milligrams of sodium. Ouch. The chicken strips could also use a little less breading on them.

Green Chile Double. This burger consists of two beef patties, two kinds of cheese (Monterey Jack and American) topped with roasted, seasoned green chiles. If you’re at all skeptical about green chiles on a burger, push past your fear and give this a try. It’s entirely possible that you’ll never have a burger without green chiles again as long as you live (okay, that’s probably a bit of an exaggeration).

The Monterey Jack and American cheese combination is perfect for this burger. The green chiles have tiny flecks of charred skin, as if they really were just roasted and peeled. They also have some spice to them, but it’s not too much. Just the right zing. This is one menu offering that Whataburger has totally nailed, fair and square.

The chain didn’t get into chicken until the 1980s, a full 30 years after it got started. It’s always questionable how good a chain is going to do with something big like chicken when it’s not their founding specialty. So you shouldn’t walk into a Whataburger thinking the chicken menu is going to be as good as someplace like Chick-fil-A, who has only done chicken since it started. With that caveat, you’ll find Whataburger’s other chicken offerings decent, but nothing to write home about.

Fans of Whataburger tend towards the fanatic end of the spectrum, which is true for the In-N-Out chain as well. Why is that?

Unlike chains such as Jimmy John’s or Domino’s, it’s certainly not about fast service. If anything, compared to most chains, you’re more likely to wonder if they forgot your order entirely, the wait can be (or at least feel) that long. Just remember that they really are cooking your burger to order, but it still takes them longer than Five Guys, which also cooks every burger to order.

If you like toasted buns, then Whataburger’s the place for you.

If you think having sauces, tomato and lettuce on the bottom bun is strange, then stick with Whataburger. In-N-Out seems to have missed the whole notion of those items being called toppings for a reason. Then again, Whataburger bacon tends to be overly crispy, and the top bun often winds up being smashed into a soggy mess.

Maybe it’s the chain’s fancy ketchup, which has been deemed good enough to sell in some regional grocery stores.

Maybe it’s the size of the burgers – and this is important. Too many better burger joints wind up creating burgers so enormously tall that they simply don’t fit into your mouth. Having to physically squash a burger down in order to be able to fit in your mouth is simply not elegant, but you won’t have that particular problem at Whataburger. Their burgers seem to be just the right size for your mouth. Then again, I suppose elegance is not what’s on most people’s minds when going out to eat at a burger joint.

The food is good, but it’s not great. I have a feeling part of what it has going for it is the fact that it’s open 24/7. If you find yourself really craving a burger at a time of day when it would otherwise be hard to get one – such as the middle of the night – then Whataburger is immediately going to be elevated in your opinion because you got what you wanted when you wanted it, which makes anything taste better, especially when you feel like you’re dying of hunger.

Previous post: FDD Talk: Our Latest Views on the Total Purchases of Products by Mac Tools Franchisees and Distributors (2014 FDD)