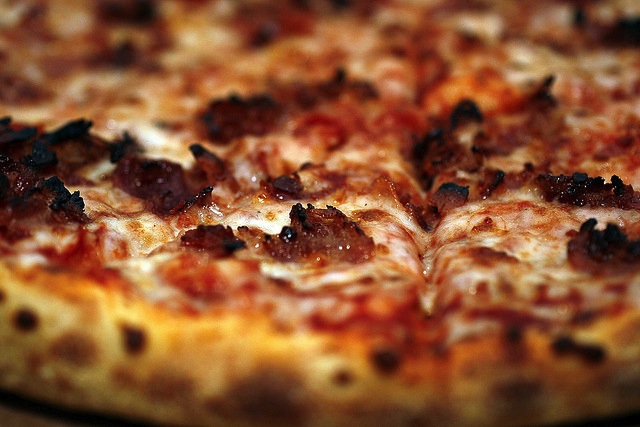 This Franchise Chatter guide on the Domino’s Pizza menu was written by Sherman Morrison.

Pizza is one of the most popular foods in the entire world. In the US on any given day, 1 out of every 8 Americans will eat some pizza – that’s 13% of the population every day! The average American eats 46 slices of pizza each year totaling 3 billion pizzas, and in 2013 Domino’s delivered 400 million of those pies.

The Domino’s Pizza franchise ranks as the second-largest pizza chain with more than 11,000 stores around the world and annual gross sales of $7.4 billion, trailing behind Pizza Hut, though not by much.

And Domino’s is the undisputed champion of pizza delivery, with its drivers clocking 10 million miles per week, and 4 million miles just on Super Bowl Sunday!

But what’s the skinny on their menu? Domino’s does a great job at keeping their menu fresh, with 85% of their items being new since 2008. Because there’s so much variation by location, we won’t cover Domino’s menu prices, but here’s what you can get from the #2 pizza chain:

You’re free to order a custom pizza with your choice of the Crunchy Thin Crust, Handmade Pan, Brooklyn Style, Classic Hand Tossed, or even a gluten-free crust with a wide variety of toppings. Available in Small (10″), Medium (12″), Large (14″), or X-Large (16″).


With 9 different sauces, 9 kinds of meat, and 18 other toppings to choose from, you have the flexibility to put together the pizza you’ve been craving.

These are all 13″x9″ rectangular pizzas designed to serve two people. Fans of these artisan pizzas note that the hand-stretched crust is a standout, and many consider it the best of Domino’s crust offerings. It has a crispiness that many chain pizzas lack, with slightly charred areas, but also just the right amount of chewiness inside.

First introduced in 2011, here are the choices from this lineup:

This line of specialty pizzas, inspired by different regions of the US, made its debut just in time for Super Bowl 43 back in 2009. Later that year, Domino’s teamed up with a company called House Party that specializes in finding people to host in-home parties centered around a particular product or brand. The 2,000 parties organized introduced a total of 30,000 people to the new line, which is apparently doing well enough to still be around today.

The only special thing about the Feast Pizza lineup is the combination and amount of toppings. Otherwise, all can be ordered with your choice of crust. All Feast Pizzas feature 100% real mozzarella cheese. Here are the different combinations available:

Domino’s went out on a limb when it started offering a line-up of oven-baked sandwiches in 2008. After all, it’s a pizza chain, not a sub shop. If all you order is a sandwich for delivery, tipping the driver makes it a pretty expensive proposition, but the lineup is obviously doing well enough to still be there 6 years later.

Still, as a sandwich option, most people would say stick with the pizza. Most find the ratio of bread to filling to lean much too far towards the bread, but the biggest mystery is why they soak the roll in some kind of butter-flavored oil, which most people find makes the sandwiches too greasy. Here’s the run-down on sandwiches available at Dom’s:

2009 was a big year of product launches at Domino’s. In addition to the American Legends lineup of pizzas, this was also the year when the chain rolled out its pasta dishes, oven-baked in a bread bowl (although you can have them without the bread bowl as well for a dollar less).

Carbophobes beware! If you go the bread bowl route, you’re basically getting carbs served in more carbs. These are single-serving entrées, and if you’re not a fan of the standard Domino’s pizza crust (which many find overly sweet and spongy), then you’re probably not going to like it baked into a super-thick bowl to hold your pasta.

Many also note that with the bread bowl, you get significantly less pasta than in the circular foil tray option. Perhaps the most common feedback on these dishes is that the “fresh” mushrooms seem anything but fresh, and the Alfredo sauce that comes on 3 out of 4 in the regular lineup is both oily and extremely salty. Here are your choices of pasta dishes from the Domino’s menu:

There was some confusion when Domino’s released its new specialty chicken menu items back in April of 2014. Somehow people got it into their heads that the company was producing pizzas with a crust made from fried chicken, but that is not the case. The specialty chicken dishes are basically 12 bite-sized pieces of lightly breaded fried chicken (100% whole breast white meat) layered with different combinations of sauces and toppings from their regular pizza menu. Here are the choices:

It was in 1992 that Domino’s rolled out its first non-pizza menu offering nationwide in the form of breadsticks served with a side of marinara. Four more bread options appeared on the menu in 2011 – 3 different Stuffed Cheesy Breads and the Parmesan Bread Bites. Here’s the list of all the Domino’s bread products:

If you need to indulge your sweet tooth along with your pizza craving, the Domino’s menu has two choices for you:

In the final analysis, what’s really driving continued financial growth at the #2 pizza chain isn’t a constant barrage of new products or even Domino’s menu prices. It’s the ease of their digital ordering system, which means you don’t even have to make an actual phone call anymore.

If you set up a profile in their system, you can order your favorite pizza with about five clicks in 30 seconds. That is nothing short of amazing. Digital orders now account for 40% of Domino’s sales, whereas the industry average is only 13%.

Now that you know all about the Domino’s Pizza menu, maybe you’ll want to take their digital ordering system for a test drive.