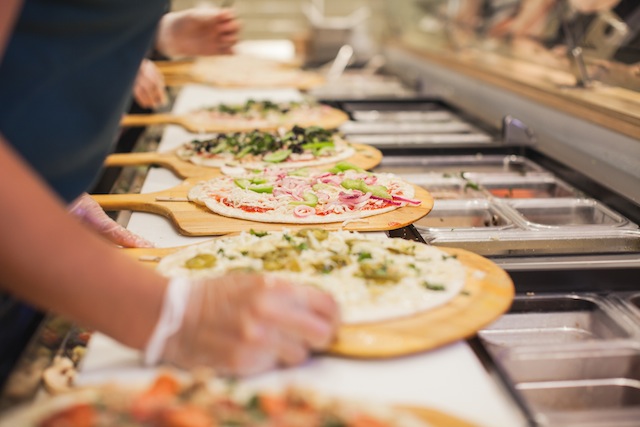 This Franchise Chatter guide on the Pieology franchise was written by Brian Bixler. Access to the full article is available to Platinum subscribers.

You don’t need a college degree to understand the concept of Pieology, one of a growing number of fast-casual custom pizza restaurants that are vying for dominance in a new category. What sounds like science, Pieology is another brand that borrows some basics from Chipotle and allows consumers to “build their own” pizza as they walk along a serving line and choose from different crusts, sauces and toppings to create a customized personal pizza baked quickly in a super-hot oven just the way customers want it.

“We’ve been flying under the radar,” admits Founder and Chief Executive Officer Carl Chang in an interview with Franchise Chatter.

The brand is expanding at a rate that puts it in competition with some of the early category leaders such as PizzaRev, Blaze and others.

Staying Ahead of the Game

The custom pizza trend marks a move away from delivery and discounting that are such a part of most big limited-service pizza restaurants, according to a report from Technomic market research for restaurants.

“These concepts court lunch customers more than traditional pizza brands, as well as those looking for fresh or better-for-you products,” the report states. The Pieology model suits the trend with differentiators that include the highest quality of food and service achieved with the best-tasting, healthiest and freshest ingredients, according to Technomic’s Fast-Casual Pizza Cluster Report of 2014.

After the report was issued, Darren Tristano, executive vice president of Technomic, said the brands that establish themselves early and grow their number of units could emerge as the eventual leaders of the segment. At the time, no brand exceeded 30 units because the concept is so new. Today, some exceed that 30-unit count and project robust growth for the future.

“With the hot growth opportunity in the under served, fast-casual pizza segment, several new upstart brands will race for category leadership and dominance,” Tristano said. “History has shown us that early entry and rapid growth can generate strong brand loyalty among consumers, increased franchise interest, sustainable growth and competitive advantage.”

Pieology is certainly trying to assert some dominance. As of November, it has 37 units opened and will likely end 2014 with a total of 50 to 60 units, Chang said. He expects an additional 75-80 units to open in 2015.

“We’re very excited about what we’re doing and our partners,” he said. “And we’ve been very selective about it.”

When asked about differentiators from an ever-increasing number of competitors, Chang points to experience. Indeed, most of Pieology’s current marketing language positions it as “the first true ‘pie-oneer’ in the fast casual, custom pizza sector,” setting it apart from the rest of the pack.

Chang has been associated with the custom pizza concept since its inception, working on perfecting his product, menu and operations since 2007. He was part of the team that founded MOD Pizza and he also partnered later with James Markham, who went on to found his own brand Project Pie.

Today, Chang seems less concerned with what his former colleagues are doing and more concerned with competition from fast-casual giants such as Panera Bread and Chipotle. Among the advantages to being one of the firsts in the custom pizza field is that it has given Pieology a chance to perfect its model, while other newer concepts—some just a few years old—are coming on the scene and playing catch-up, he said.

“They are continuing to evolve and learn what systems work for them,” Chang said of some competitors. “We started evolving the concept in ’07. They’re looking at some of those operations now that we feel we’ve got a pretty good handle on.”

“There are a lot of concepts now because of our success. Being one of the pioneers in the space, being one of the people who originated the idea and concept, is important.”

Pieology is located in nine states today and is looking to expand further. But its presence in current markets is important as well, and Chang said the brand will continue to grow in those established markets through multi-unit agreements that the company currently has in place with select franchisees and will continue to pursue in the future.

As it grows, it will continue to focus on other differentiators. For example the dough that is pressed to create the pizzas is a proprietary blend made daily at each store according to specific instructions. The chain also has proprietary sauces that come prepackaged from one distributor for consistency, he said.

Finally, Pieology sets its menu apart from others by featuring what it calls a “flavor blast.” Those flavors added after the pie emerges from the hot oven include roasted red peppers, Buffalo sauce, pesto, olive oil and others.

In addition to creating their own 11.5-inch pizzas for one price, customers, whom Chang calls “pieologists,” can also choose from predetermined combinations of topping for a pie developed by Pieology’s “pizza lab.”

Chang, himself, might be seen as another differentiator for the company. He attended the University of California, Berkeley, on a full athletic scholarship for tennis and graduated with a degree in international business in 1991. At first, he concentrated on his sport, coaching his younger brother Michael for a decade. Michael Chang is the youngest-ever male winner of a Grand Slam singles title, having won it in 1989 at the age of 17. For his many contributions to the sport, Carl Chang was named Coach of the Year by Tennis magazine in 1996.

But he soon put his business degree to work, acquiring property management and brokerage firms that represented companies including Target, Starbucks, Home Depot and Costco.

His foray into the custom pizza space occurred first when he partnered with Ally and Scott Svenson, founders of the Seattle Coffee Co., to help create MOD—short for Made On Demand—in the Pacific Northwest. He has continued to pioneer the fast-casual pizza concept with Pieology, which got its start in Fullerton, Calif. The Golden State continues to be a hotbed of activity for the Pieology chain and is one of the most important to the brand, along with Minnesota. Chang has called both states home.

Pieology announced in October that it would open seven additional locations in Northern and Central California by the end of the year. In October alone, the company celebrated grand openings in the cities of Gilroy, Fairfield, and Fresno. Locations will follow in Daly City, Sacramento, Vacaville and Santa Rosa for a total of 11 units in the state, including those that already exist.

“Executed from a finely-tuned growth strategy, the expansion falls directly in line with the impressive national progress of the company, as well as its mission to inspire and give back to the individuals who reside in those areas,” according to a release at the time of the announcement.

Figures from the company’s Franchise Disclosure Document show that the first two company-owned stores existing in California—one in Fullerton, the other in Irvine—since 2012 have achieved annual sales of more than $2.3 million.

The Fullerton restaurant occupies 2,850 square feet of space in a strip mall location in an urban area. The Irvine restaurant occupies 2,050 square feet in a strip mall location in an outdoor mall in an urban area. Such sales, and verification by a third party, allow Chang to make the claim that his chain boasts the highest average daily sales per store compared to its direct competitors.

The total investment necessary to begin operation of a Pieology franchise ranges from $458,500 to $874,500, according to the FDD. That includes an initial franchise fee of $25,000.

The company is interested in attracting investors who will sign a development rights rider to open units over a large territory or region. Those initial costs vary depending on the number of restaurants the franchisee opens. The fee is $10,000 multiplied by the minimum number of restaurants that are to be opened, plus an initial $35,000 franchise fee, which includes training costs. 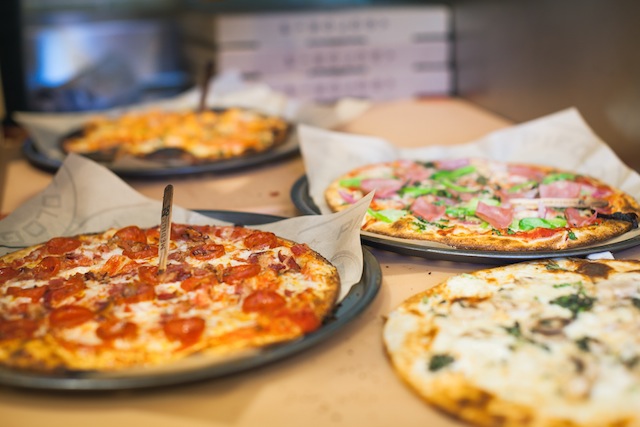