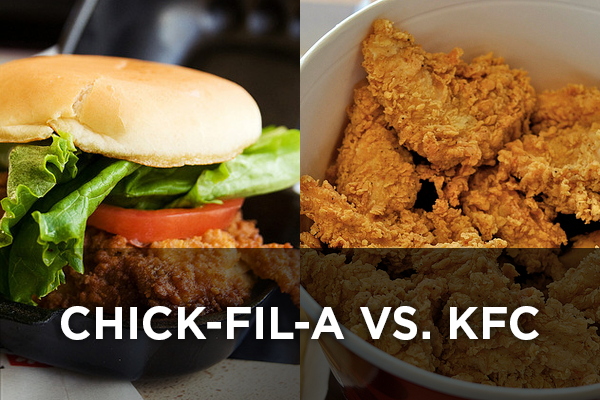 This Franchise Chatter Guide on Chick-fil-A and KFC was written by Brian Bixler.

The year 2014 has certainly given Chick-fil-A something to crow about: The brand overtook iconic KFC to become the United States’ most successful chicken restaurant based on sales. A report earlier this year by Janney Capital Markets confirmed the company’s success at overshadowing KFC, but went further to say that the brand is also well on its way to capturing large market share from limited-service leader McDonald’s.

When QSR magazine released its latest QSR 50 ranking in August, it noted that Chick-fil-A “put more space between it and competitor KFC,” though both brands landed in the top 10, at No. 9 and No. 10 respectively. The ranking is based on system-wide sales of $5.1 billion for Chick-fil-A and $4.3 billion for KFC. But KFC is fighting back by testing some new concepts, including a fast-casual version of its restaurant with additional menu items and a more modern, contemporary environment.

So, which brand is the best for investment at this juncture? Both brands have their own attributes, but most analysts and reports seem to favor Chick-fil-A.

“Chick-fil-A’s ability to grab market share within the U.S. limited-service chicken category has been legendary,” writes Janney analyst Mark Kalinowski. “Back in 1999, the category leader was Yum Brands-owned KFC, with 39.7 percent share. In that year, Chick-fil-A’s market share was 8.7 percent—not even in the double digits, and less than a quarter than that of KFC. Fast-forward to the year 2013, though…and now, Chick-fil-A is the clear category leader with 26.3 percent share, several percentage points more than KFC’s 21.9 percent.”

Headquartered in College Park, Ga., just outside of Atlanta, Chick-fil-A dates back to the mid-1960s when S. Truett Cathy found a pressure-fryer that could cook a chicken sandwich in equal time to that which it took to cook a fast-food hamburger. He later registered the name Chick-fil-A with the upper-case A—standing for grade-A goodness—because he believed in serving high quality food with fresh, local ingredients where possible.

Today, the brand stands for that same quality. Cathy, who died this year at age 93, had remained chairman emeritus of the privately held company while his son, Dan Cathy, acts as president and chief executive officer.

KFC, or Kentucky Fried Chicken as it was known then, dates back to the Great Depression when entrepreneur “Colonel” Harland Sanders began selling fried chicken from a roadside restaurant in Corbin, Ky. The first franchise opened in Salt Lake City, Utah, in 1952, beginning a branding campaign that would include the convenience of a bucketload of fried chicken made from a secret recipe of 11 herbs and spices.

While Sanders sold the company back in 1964, his image remains closely associated with the brand. Over the years, the restaurant chain has undergone several changes in ownership, including being a subsidiary to PepsiCo. KFC eventually became part of that company’s restaurants division Tricon Global Restaurants, which later changed its name to the current Yum! Brands.

During its history, KFC became the first Western restaurant chain to open in China, one of its largest markets, and today remains one of the largest chains in the world in terms of number of units with more than 18,200 worldwide.

According to the QSR 50, Chick-fil-A closed out 2013 with 1,775 units in the United States, which included 92 new units added during the year. The company also posted the highest average sales per unit of all quick-service restaurants for the second consecutive year, averaging more than $2.8 million in sales per restaurant.

When compared to KFC, the disparity between the two brands is apparent. According to the QSR 50, KFC closed out last year with 4,491 units in the U.S. But that number reflects more than 125 store closings during the year. Furthermore, average sales per unit was $942,000, just a third of that reported by Chick-fil-A.

Analysts have also noted that Chick-fil-A continued to expand during the recession while rival KFC saw its total number of units contract, along with those of Pizza Hut, Arby’s, Hardee’s and Dairy Queen, QSR reported. KFC, however, landed the No. 16 spot on this year’s Entrepreneur Franchise 500, unlike Chick-fil-A, which failed to make the list.

As already noted, Chick-fil-A’s ascent in the fast-food space has been stratospheric. Not only does the company register healthy sales, it has instituted strategies to keep it surging further past KFC while putting a dent in market share of other fast-food giants.

Investors might note that Chick-fil-A scores not only high marks in terms of market performance, it also passes the taste test with customers according to a recent survey. Readers of Consumer Reports rated Chick-fil-A the highest for taste in a cover story this summer about the nation’s best and worst fast foods. In the same survey on taste, which compared eight major chicken brands, KFC came in dead last.

Chick-fil-A also has a menu that analysts feel has a wider appeal among diverse customers, especially families. The menu includes the signature chicken sandwich but also chicken nuggets, strips, waffle fries, a selection of wraps and salads, plus desserts such as specialty milkshakes and ice cream treats.

The company culture is centered around a Christian philosophy and the chain famously keeps its units closed on Sundays for religious purposes. The religious philosophy has been the source of some controversy and public relations gaffes, such as the brouhaha created in 2012 when CEO Cathy made some incendiary remarks about same-sex marriage; but the company has weathered any sort of storm created and appears to have appeased protesters and those who called for a boycott of the company’s restaurants.

Meanwhile, the company has taken steps to solidify its current strength in the fast-food industry and spur future growth. Chick-fil-A already has a popular breakfast menu which makes it a competitor in that coveted daypart. In addition to a chicken biscuit and its variations, as well as traditional breakfast sandwiches, the company this year began serving the industry’s first-ever specialty grade coffee.

Chick-fil-A partnered with Thrive Farmers Coffee, which created a blend specifically for the chain. The product launch also included news about the company’s philanthropic mission of providing direct revenue to Thrive Farmers’ network of family farmers in Central America, allowing them to earn more money.

The coffee was also crafted with characteristics and flavors that complement the chain’s breakfast menu, while allowing it to stand alone as a premium cup of coffee throughout the day. The introduction of the specialty coffee, which also has an iced version, is seen by some to be the initial sortie of a direct challenge to McDonald’s McCafe line of drinks.

A renewed breakfast focus at Chick-fil-A also includes the testing of a new chicken and waffles menu item as reported this summer by Bloomberg Businessweek. The new dish, being tested in Georgia, includes the company’s famous boneless breaded chicken cutlet alongside a maple-syrup flavored waffle and a side of honey. The company has not yet announced whether the new item would be extended to the company’s menu nationally.

Another initiative has Chick-fil-A making a direct appeal to McDonald’s Happy Meal crowd, which makes sense for the brand that looks to attract families. For the first time in 25 years, McDonald’s lost its status as the No. 1 chain with the most “kid appeal” and Chick-fil-A has taken its spot, according to a report by Crain’s Chicago Business based on findings from Sandelman & Associates Inc., a restaurant research firm. According to the report, Chick-fil-A is finding more appeal among a younger demographic that includes millennials with small children.

In fact, attracting millennials is one of the ways Chick-fil-A is achieving such phenomenal growth including a significant national expansion. And there is plenty of room for growth according to Business Insider, which published a story this summer under the headline “Three Reasons Why Chick-fil-A Is Destroying KFC.” Aside from its breakfast offerings and differentiated menu, Chick-fil-A is cited for having the potential to expand its footprint, especially in the Northeast. “These states are heavily populated, which could mean big sales for Chick-fil-A,” the website notes.

But KFC isn’t lying down to take its licks from Chick-fil-A. It’s fighting back by joining other fast-food giants that are altering their models to appeal to customers who want a fast-casual experience—a trend that mixes fast-food-style service with a heightened dining experience characterized by customization of the product, an upscale interior design and higher quality ingredients than most fast food, but at a more affordable price than a sit-down restaurant.

KFC launched its own answer to fast casual in August 2013 with the opening of the first KFC Eleven, an upmarket version of the chain with a menu of updated side dishes, salads, rice bowls, flatbread sandwiches and boneless pieces of Original Recipe chicken.

RELATED: Franchise Chatter Guide: How Trendy, ‘Better’ Brands Are Taking a Big Bite Out of Sales From Old-Time Franchisors

Recognizing the challenge presented by the fast-casual segment, KFC’s parent company is also instituting similar measures for its other brands, such as Pizza Hut and Taco Bell—all in an effort to appeal to an increasingly younger demographic. For example, Yum! Brands’ Taco Bell chain introduced a higher-priced Cantina Bell menu in 2012 and it has since launched two new sister concepts, the U.S. Taco Co. and Urban Taproom. Analysts have said the moves enable Taco Bell to compete better with Chipotle, which is said to have started the whole fast-casual dining trend.

Furthermore, Yum! introduced this year a “banh mi” (a Vietnamese sandwich) shop in Texas. Banh Shop offers six types of Asian sandwiches, plus rice and pasta bowls and salads. Numbers from Technomic market research show why such new concepts are necessary. While the compound annual rate of growth for all limited-service restaurants is projected to be 4.5 percent from 2012 to 2017, fast-casual operators are expected to grow 10 percent on average during the same period.

In addition to wooing millennials, KFC is also making up for poor domestic sales and store closings by concentrating on foreign markets, including China. However, those efforts were hampered recently by a food scandal that may have eroded some confidence in the product. A supplier for KFC and McDonald’s was shut down in July after a news report showed factory workers using expired meat.

But the Chinese market is an important one for KFC and Yum! Brands, as explained by Market Realist. “With only two restaurants per million people in emerging markets, the company plans to open new locations in certain countries,” the website writes about Yum!. “Growing restaurant units is the first step to capturing customers in a market. Yum! Brands is aggressively growing its units in China.”

The website also notes that KFC units declined at an average rate of 3 percent in the five years that ended in 2013. But in China, KFC units grew at an average of 13 percent over those five years. India also had double-digit growth with KFC units growing 29 percent. In a report earlier this year Market Realist reported that China contributed 52 percent of Yum! Brands total sales and KFC contributed 24 percent to sales.

But entry into new markets also requires marketing efforts that will attract and maintain customers. Once again, Chick-fil-A might have an edge. It was recently ranked among the top 20 brands with the most loyal followers on Facebook. Loud Door, a leading market research and targeting platform developer, presented the results in its new findings for 2014. Loud Door’s brand-satisfaction survey tracks every major brand on Facebook and how likely its fans are to recommend the brand to friends or colleagues.

Janney Capital Markets also seems in favor of Chick-fil-A’s future growth. It predicts the chain will be in the top five of all major restaurants by the year 2020 with an estimated $10.8 billion in annual sales.