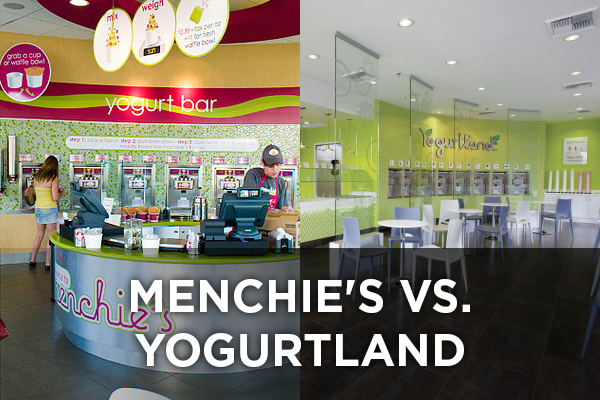 This Franchise Chatter Guide on Menchie’s and Yogurtland was written by Brian Bixler.

With the proliferation of frozen yogurt stores at its peak, it might seem as though there are as many brands as there are flavors, making it a challenge for potential investors to choose the best one for their money and effort. Franchise Chatter did some of the homework for investors when it put together the Top 10 Frozen Yogurt Franchises of 2013 list. In this post, we narrow it down even further to the top two—Menchie’s and Yogurtland—as we compare the brands to see what advantages or disadvantages each one has in the market and which one makes the better investment.

Menchie’s is based in Encino, Calif., and is one of the big success stories of the frozen yogurt explosion. It began with a husband-and-wife team, Adam and Danna Caldwell, who had a vision in 2007. They named the franchise from a variation on the word “mensch,” meaning a person who does the right thing, or a good guy. What started as a nickname for Danna Caldwell became a philosophy embedded in the company’s DNA as it encourages its franchisees to make a difference in their communities with fundraising activities for schools and altruistic organizations.

The company mission statement is simple: “We make you smile.” And it strives to do that with three p’s: product, place and people. Menchie’s shops offer self-serve frozen yogurt in 100 rotating flavors, including low-carb, no-sugar-added, dairy-free, non-fat, gluten-free and kosher options. Menchie’s model is similar to others with respect to its emphasis on a healthy frozen dessert and the opportunity it provides for customers to customize their purchase with various flavors of yogurt and toppings they pay for by weight.

Yogurtland has been around since 2006 when Phillip Chang opened the first store in Southern California, the birthplace of a number of frozen yogurt brands. Chang changed the industry by introducing the self-serve model, which was quickly adopted by most other leading brands.

Headquartered in Irvine, Calif., Yogurtland is best known for creating proprietary flavors, such as Chocolate Coconut Truffle, Devil’s Food Cupcake Batter and Guava Pineapple Tart, and putting them in rotation to serve more than 100 different kinds of tart and creamy yogurt. In developing the brand, the company’s so-called “flavorologists” continue to experiment with new flavors and concepts at a research and development lab in Irvine, including cookies that customers can put under yogurt servings or between layers. A new plant in Paramount, Calif., produces the yogurt for multiple store locations.

Earlier this year, the company announced a change in leadership with new Chief Executive Officer Huntley Castner taking over from founder Chang, who became chairman and left the CEO position to contribute more time to philanthropic pursuits, according to reports. However, Chang returned as CEO mid-summer prompting layoffs at the executive level because of poor store sales, according to the Orange County Register.

Founded in May 2007, Menchie’s began franchising in 2008 and grew to more than 250 locations in five years with hundreds more franchise agreements in the pipeline, according to company reports. The brand averages five new openings a month internationally as reported by Franchise Chatter; and it officially opened its 400th location earlier this year in Kitsilano, Vancouver, British Columbia.

According to a company release that accompanied the opening, the yogurt brand will continue its growth with a pipeline of more than 500 units currently in development, including a total of 150 new units it expects to be opened during 2014. Menchie’s is pursuing global expansion with development on five continents including multi-operator agreements for Japan, South Africa, Australia, Israel, Panama and Puerto Rico, among other territories.

With locations in North America, Australia, Guam, Mexico, Venezuela and the first store in the Middle East (which opened earlier this year in Dubai), Yogurtland also has a plan for continued international and domestic growth. It opened 77 new locations in 2013, including expansion into New York, Chicago and Boston. It has grown more than 160 percent in three years, according to its website. In July 2014, Yogurtland announced the opening of its 300th location with plans to open a total of 50 new stores before the end of 2014.

The company continues to be recognized as a pioneer in the self-serve frozen yogurt industry and is currently in the midst of a seven-­year plan to reach 1,000 units by 2018. In the most recent Restaurant Chain Growth Report from RestaurantNews.com, Yogurtland was said to have increased units by 40 percent in the last year and entered new markets in Massachusetts, North Carolina and Pennsylvania.

In another report issued in the fourth quarter of 2013, IBISWorld market research firm estimated market share for both brands to be about equal in the United States. Yogurtland’s market share was estimated to be 12.4 percent, while Menchie’s weighed in with 12.1 percent, according to IBISWorld.

The franchise models for Menchie’s and Yogurtland are very similar. Both serve an equal number of highly varied frozen yogurt flavors with a “weigh and pay” format, in lively, fun environments. Menchie’s has been recognized for its foresight in building its units for large volumes and to facilitate interaction among its customers. Both brands stress the nutritional and dietary value of their product over ice cream and other frozen desserts. Both have received the Live and Active Culture (LAC) seal from the National Yogurt Association, meaning they meet NYA’s criteria for “live and active culture frozen yogurt.” Plus each features non- and low-fat yogurt flavors as well as non-dairy and no-sugar-added choices. Yogurtland fruit flavors are also fortified with Vitamin C.

RELATED: Fro-Yo Files Report (2014): After a Meltdown in the ’90s, What’s New About Frozen Yogurt Franchises to Prevent Another Thaw in Sales?

Each brand is also fairly insulated from market conditions that might plague other brands that came late to the frozen yogurt table and face stiff competition from the number of growing brands in just the last few years. By aggressively expanding the number of units early in the boom, both Yogurtland and Menchie’s seem to have secured their spots as leaders in the sector, with Menchie’s claiming to be the largest frozen yogurt brand in terms of number of units. But Yogurtland is not far behind and in a position to overtake Menchie’s as the No. 1 brand.

Menchie’s is also the No. 1 frozen yogurt brand according to this year’s Entrepreneur Franchise 500, landing at No. 116 on the list, the highest of any yogurt company. Yogurtland came in at No. 171 on this year’s list, below both Menchie’s and Orange Leaf Frozen Yogurt, which took the No. 127 spot.

Still, in addition to being Franchise Chatter’s pick for No. 1 frozen yogurt brand last year, Yogurtland debuted on the prestigious Inc. 5000 list (2013) by achieving 168 percent growth over three years; it entered at No. 2201 on the list and was the only frozen yogurt brand represented.

Also important to investors is the fact that Yogurtland has been known for having the highest sales volume in the industry, with average net sales volume of more than $650,000 annually.

Both Yogurtland and Menchie’s have embraced non-traditional marketing methods to increase brand awareness and brand loyalty. Menchie’s has amassed about 367,000 Facebook friends and 19,200 Twitter followers, while issuing more than 2.5 million “My Smileage” customer-frequency cards that reward patrons for visiting Menchie’s often. The company is also keeping its name in front of customers’ eyes by selling merchandise such as clothing, lunch boxes, dodge balls and other swag at its outlets.

Last year, the brand teamed up with Columbia Pictures and Sony Pictures Animation to promote “The Smurfs 2” movie with a limited-time Smurfberry Blast flavor, special toppings and a special reusable cup all related to the film. Furthermore, Amit Kleinberger, who partnered with the Caldwells in 2007 and became Menchie’s CEO, has made two appearances on the popular CBS television show “Undercover Boss,” bringing more exposure of the brand to the general public.

Finally, Menchie’s garners media coverage because of its philanthropic mission both at a local level with individual franchisees and at the corporate level with special initiatives. For example, Menchie’s raised more than $350,000 for Make-A-Wish during the month of August 2014, surpassing its goal of a quarter million.

Yogurtland has its own marketing strategies designed to attract and keep new customers. The company says Yogurtland customers are very active in providing feedback through social networking sites, helping to determine which flavors will continue on the menu and which new ones might be introduced. The company has more than 420,000 Facebook “likes” and 14,700 Twitter followers.

But it has captured its customers’ imaginations additionally through specially designed biodegradable spoons that have become collectibles. As a marketing tool, the brand served up more than 44 million signature, reusable spoons in its stores in 2013. In its most noteworthy promotion, Yogurtland partnered with Sanrio to produce limited-edition Hello Kitty spoons in a successful co-branding initiative that attracts women and children.

Frozen yogurt stores are now a billion-dollar business in the United States, with about 400 companies vying for customers in the market, IBISWorld estimates. Industry observers have been predicting consolidation and slower growth in the sector, and some say that is already happening. In a recent article published by the Fredericksburg Free Lance-Star in Virginia, the newspaper ponders whether the “froyo fad” is “starting to fade” and whether frozen yogurt franchisees shuttering their doors in Virginia is indicative of a national trend.

“The craze, which gained traction locally in 2011 with the opening of multiple shops, is slowing,” the article states, noting at least four recent closings across the state, including two Menchie’s locations in Short Pump and Mechanicsville, Va.

Under the headline “Thaw Ahead For Frozen Yogurt M&A,” Forbes also posted a piece from Mergermarket that described consolidation happening in the sector. It focused mainly on Nevada-based U-Swirl’s acquisition of CherryBerry Enterprises for $7.13 million earlier this year.

Such consolidation and continually growing competition is just one more battle for Menchie’s and Yogurtland as they both try to dominate the market.