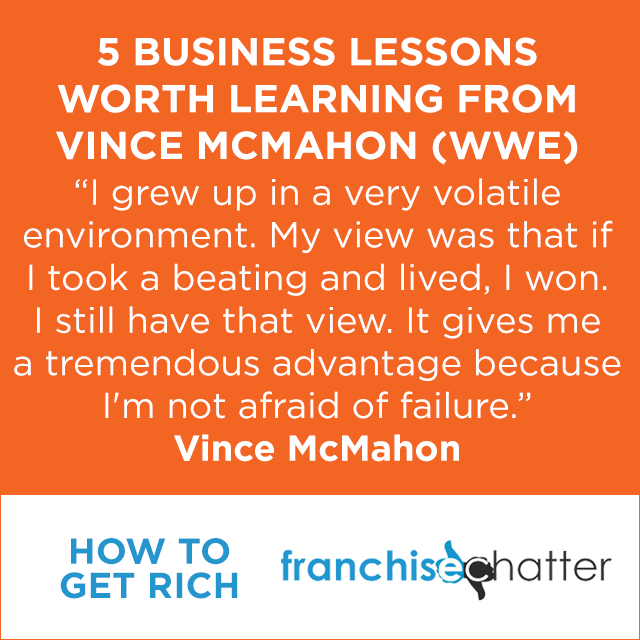 “I grew up in a very volatile environment. My view was that if I took a beating and lived, I won. I still have that view. It gives me a tremendous advantage because I’m not afraid of failure.” ~ Vince McMahon

Vince McMahon is well known by wrestling fans for the character he plays in the ring. What the general public may not know, however, is that this wrestling guru has a net worth of $860 million. Having purchased his ailing father’s small wrestling company in 1972, McMahon grew it into an international success story. Keenly aware of what his audience was looking for, and with an eye toward modern technology’s capacity to deliver, Vince McMahon created not just a company, but a brand.

The out-of-the-ring business leader, though not as well known as the in-ring “Mr. McMahon,” is equally as successful, perhaps even more so. His company went public in 1999 and the former announcer, commentator, film producer, actor and occasional professional wrestler McMahon now serves as the majority owner, Chairman, and CEO of World Wrestling Entertainment (WWE). Here are five lessons to learn from him:

1. Pay Attention to the Consumer

With all the time he spent in the wrestling ring, McMahon has firsthand experience listening to his supporters as well as his detractors, which is the same thing you have to do in business.

In the late 1990s, McMahon sensed that wrestling audiences wanted something different. They were becoming a tougher and more contemptuous base of supporters. McMahon crafted storylines for this changing audience and a new model was born. Known as “WWF Attitude,” the new concept catapulted McMahon’s company ahead of the industry leader at the time, World Championship Wrestling (WCW) owned by Ted Turner.

McMahon continued to give the wrestling world what it wanted as he created new stories with colorful characters who often were involved in long running feuds. Embedded in pop-culture itself, the WWF was to become among the highest-rated shows on cable television. After all, who doesn’t like a battle between good and evil? And many times the mean, adversarial character draws as much support as the more likeable ones.


So if the consumer wants it, give it to them, and be sure that they can get it live, on cable, streamed, or however else they are willing to pay for it! Without satisfied customers, you simply cannot be successful.

Taking a chance and risking failure is the only way to move forward. Like many successful entrepreneurs, McMahon knows that success doesn’t come without risk taking; “I take chances in life…I got balls the size of grapefruits!” His father may have wanted him to be a lawyer or a doctor, but taking the safe route was just not in his DNA.

And having a passion for risk-taking does not mean that you need to enjoy failure. In fact, risk-takers often despise failure. Like McMahon, however, they’re not afraid of it. The instinctive feeling that things could get better and bigger is greater than the fear of failure. You do battle against that fear and press onward.

McMahon himself, when asked about who he admires, names Martin Luther King Jr. Not surprisingly, he cites the fact that King took risks. Referring to MLK, McMahon says, “He took such risks – unfortunately, the ultimate risk – for what he believed in.”

McMahon’s latest risk is launching the WWE Network for paid 24/7 online streaming of wrestling programming. As of this writing, the 700,000 paid subscribers is short of the 1 million mark needed to make the venture profitable, so it remains to be seen how this will pan out.

McMahon has made his share of mistakes, but he also freely admits and discusses them. His attempt to take on the mighty National Football League was a huge mistake. But you can’t ignore the mistakes, especially when there are valuable lessons to be learned from them. Your vision must continue to guide your path, and like McMahon, with each mistake you have an opportunity to learn and become smarter. “What I learned from the XFL experience is to be smarter the next time I take on the NFL.”

McMahon believes wholeheartedly in the adage that what doesn’t kill you makes you stronger. To let a mistake halt your aspirations is to succumb to business paralysis. Learn why things went wrong, figure out how you might do things differently the next time, and then move forward. That’s a lesson that McMahon, like most successful people, adheres to – and one that remains a vital guide to achieving your goals.

4. Strive to be Number One

As a once aspiring song writer, McMahon penned the lyrics, “I’m a man running wild, heading for the top.” The top has been in his sites throughout his varied career. Whether it’s by cultivating a climate of hard work or making sure to hire the best job applicants, that goal of being number one at what you do propels you forward and is often the advantage you have over other less hungry competitors.

McMahon reaffirms that goal each day, viewing each one as a fresh opportunity. Instead of remaining stuck in the past, reconnecting to your goal of being the best will empower you to make better decisions. Each new day offers new insight, new information and new opportunities, unless you lose that desire to be number one.

Aiming to be number one doesn’t guarantee you’ll make it, but not trying will guarantee that you won’t.

5. Keep It Exciting and Fun

You have to begin with passion and then keep that passion burning. That may mean never being fully satisfied, but if you’re having fun along the way, you’ll stay motivated and happy. McMahon says, “I have a voracious appetite, for life and everything in it.”

If you’re not enjoying the work you’re doing, your work will soon suffer, and those around you who feed off your passion and zest will cease to be inspired by you. For McMahon, the wrestling industry is the perfect outlet for his passion. It’s pure entertainment, and he loves to entertain. “The biggest thrill in the world is entertaining the public, there is no bigger thrill than that,” he says.

He clearly loves what he does and is passionate about his work. Whatever the business venture, whatever the outlet, you must have joy and excitement. Keep those fires stoked as McMahon has, and don’t forget to laugh along the way. As McMahon says, “C’mon, you have to laugh at it.”

Vince McMahon may not be the first person you think of when asked to list well-known and successful businessmen. But this entertainer-turned-entrepreneur has effectively and profitably changed an entire entertainment and sports industry. He has done so with a combination of attributes and ideas. It’s not the only way to do it, but his $860 million net worth is proof of his success. To achieve a similar level of success, keep these five lessons in mind.