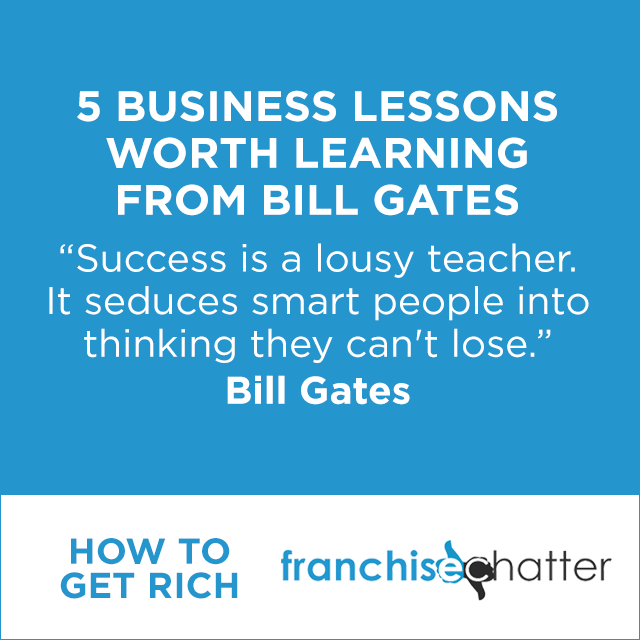 “Success is a lousy teacher. It seduces smart people into thinking they can’t lose.” ~ Bill Gates

With a net worth of $81.6 billion, Bill Gates ranks as the world’s second-richest person, currently edged out by Carlos Slim Helu of Mexico whose net worth is $85.4 billion. Having made his initial fame and fortune by heading up computer software juggernaut Microsoft, he continues to make waves through his position as Co-Chair of the Bill and Melinda Gates Foundation. He stepped down as CEO of Microsoft in 2000, and finally gave up his position as Chairman of the company in February 2014.

In July 2014, Gates shared what he considers to be the best business book ever written – Business Adventures by John Brooks, published in 1969. Interestingly enough, it was investment guru Warren Buffett who first recommended the book to him back in 1991. Gates and Buffett, as two of the world’s richest men, have become good friends over the decades and Buffett has donated billions in stock to the Gates Foundation, where he plans to eventually deposit the majority of his wealth.

Bill Gates is one of the most successful people in the world of business and philanthropy. Here are five essential lessons to learn from him:

1. Keep Success and Failure in Perspective

As you’ve already seen from the initial quote, Gates takes all success with a grain of salt. He thinks it’s a lousy teacher because it can lull one into a false sense of security. That’s why Gates is also fond of saying, “It’s fine to celebrate success but it is more important to heed the lessons of failure.”

How does this perspective on success and failure translate into business practices? It does so in a variety of ways, but Gates summarizes the most important one this way: “Your most unhappy customers are your greatest source of learning.” In other words, if you have unhappy customers, then your business has failed them in some way. Learning from that failure and turning unhappy customers into happy ones is a failsafe path to success. Just don’t let it go to your head!


2. Make the Most of the Opportunities You’re Given

Malcolm Gladwell, in his book Outliers: The Story of Success, notes that Gates was born at the right time and in the right place to have a shot at becoming a computer guru. Born in 1955, Gates was attending a private middle school in 1968 that just so happened to make a $3,000 investment in bringing a computer to the school. This was unheard of in those days, when most colleges didn’t even have computers.

Gates had the opportunity to log in literally thousands of hours, teaching himself how to program. He may have even reached that magic threshold of 10,000 hours that many believe are a prerequisite to developing a world-class skill level at something.

Then when the first PC computer, the Altair, was coming online, Gates was old enough to be able to do something about it. He was so excited by the possibilities that he dropped out of Harvard in 1975 to start Microsoft. The rest, as they say, is history. Gates was lucky enough to be born in the right place and at the right time, but he also had to make the most of it.

In an age where companies fret over the wording of a tagline or marketing slogan, Bill Gates takes a much more fundamental approach. Develop solutions to the real problems people face and you’ll wind up with a great product that practically markets itself. To do otherwise is to put the proverbial cart before the horse. As Gates himself says, “If you show people the problems and you show people the solutions, they will be moved to act.”

When you’ve got a great solution to a problem, the marketing of the product will come much easier. Yes, all the marketing gimmicks are great and will help sell your product, but if that product is not solving a real problem, chances are long-term success will continue to elude you.

And it doesn’t happen overnight, either. Back in the early 1980s, Gates spent a lot of time trying to convince people that a graphics-based user interface to operate personal computers was the way to go. People simply weren’t convinced. It wasn’t until Apple’s launch of the Macintosh in 1984 that people finally got it. Luckily, Microsoft had been working on Windows for the previous two years and was able to release the first version of it in 1985.

There is simply no substitute for the creativity and imagination that comes from immersing yourself in the world of books. As Gates himself has said, “I really had a lot of dreams when I was a kid, and I think a great deal of that grew out of the fact that I had a chance to read a lot.” Gates still averages about a book a week.

It’s probably a good idea to pay attention to what one of the world’s most successful people reads. The introduction to this article mentioned his favorite business book of all time, Business Adventures by John Brooks. It’s on his 2014 summer reading recommendations, along with other books he’s read over the last several years that he thinks are important. You can see his book selections on the books section of his blog, GatesNotes.

Bill Gates enjoys speaking to young people, and he nearly always injects a good deal of hard realism in his presentations to the future leaders of the business world. He advises youngsters that thinking they’re going to make a six-figure salary as a freshly minted graduate simply isn’t realistic. He’s also famous for saying, “If you think your teacher is tough, wait till you meet your boss.”

He’s basically saying that education has gotten a bit soft in some ways, but most of the business world does not share that same softness. Many schools have done everything they can to eliminate the whole concept of winners and losers, but it’s still the way things happen in business, so develop a thick skin.

There can be no doubt in anyone’s mind that Microsoft has been one of the most powerful business forces in history. Now the Gates Foundation is quickly becoming as powerful a force in the world of philanthropy. Few people get to enjoy the level of success that Bill Gates has achieved over the last several decades. If you’re envious of his $81.6 billion net worth, then you should take these five lessons to heart.

Next post: Battle of the Brands: No Finish Line in Sight for Anytime Fitness and Planet Fitness in Race to Be No. 1 in the Industry