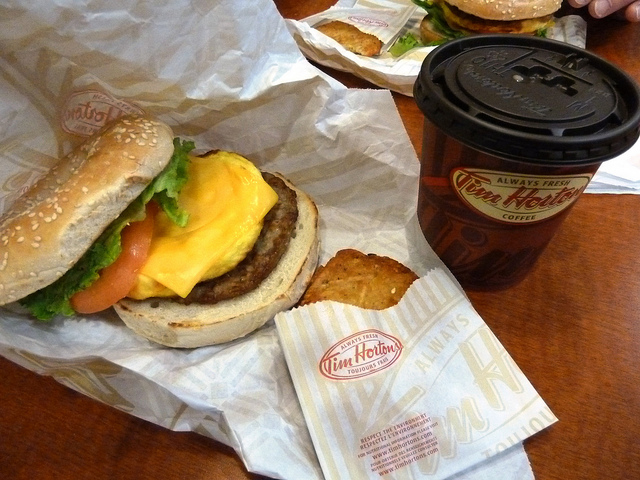 Tim Hortons is a Canadian food franchise juggernaut that is making significant inroads into the US market. It started back in 1964, founded in Hamilton, Ontario, by Canadian professional hockey player Miles G. “Tim” Horton, who died in a tragic car accident in 1974.

When it first opened, there were only two items on the menu – coffee and donuts. Among its donut selection, early hits included the Apple Fritter and the Dutchie, both of which remain among the most popular selections on the menu today. In 1976, the company introduced its wildly popular Timbit bite-sized donut holes.

Here are 10 must-read news stories about the Tim Hortons franchise:

If you haven’t noticed, Tim Hortons is in the news a lot these days because of the fact that Burger King is acquiring the entire operation for just over $11 billion, making the combined entity the world’s third-largest quick-serve restaurant chain. The deal was announced on Tuesday, August 26, 2014 and included the announcement that Burger King would move its headquarters to Canada. Both will continue to operate as separate brands, but the combined company will boast 18,000 restaurants in 100 countries and sales topping $23 billion (Time).

Needless to say, Tim Hortons fans in Canada are very concerned about what effect the merger will have on the Tim Hortons experience and brand, which has become an icon of Canadian identity (ABC News). Officials have been quick to point out that each brand will continue to operate independently and that no mixing of product offerings is planned (US News & World Report). Company headquarters will continue to be in Oakville, Ontario.

Officials have also stated that there are no planned changes to how franchising takes place, either in rent or royalties, charitable activities, or how locations are staffed (CNW). Just how many Tim Hortons executives will have significant placement in the new company beyond Marc Caira’s vice-chairman position remains to be seen.

3G Will Have 51% Ownership of New Company

3G Capital is a New York-based investment company that got its start in Brazil. Its current 70% ownership stake in Burger King will translate into a 51% interest in the newly merged company. (As previously mentioned, 3G Capital managing partner Alex Behring will become the new company’s executive chairman.)

3G made a splash in the food manufacturing sector last year by combining forces with investment guru Warren Buffet and his Berkshire Hathaway company in acquiring Heinz for $23 billion. Buffett’s company is also taking a slice in the new Burger King-Tim Hortons company through $3 billion worth of preferred stock (Insider Monkey), although it will not be participating in managing the new company’s operations (NPR).

3G is currently headed up by Brazil’s wealthiest man, Jorge Paulo Lemann, whose personal fortune jumped by $1.3 billion with the deal’s announcement.

One commentator has noted that while the Burger King-Tim Hortons deal has once again put the tax inversion phenomenon in the spotlight, many have missed the fact that Tim Hortons has earnings that exceed those of Burger King and Dunkin’ Donuts combined. With more than 3,600 locations in Canada, there is a higher per capita concentration of Tim Hortons restaurants in that country than of McDonald’s locations in the US – more than twice the concentration.

The company’s reported 2013 revenues of $3.26 billion is more than twice those of Burger King, the latter chain having more than 13,000 stores around the world compared to Tim’s 4,524. And Tim Hortons’ $430 million in profits is more than three times those of Dunkin’ Donuts. Clearly, it’s an amazingly successful company (Washington Post).

It’s Not the First Time Tim Hortons Has Been Purchased

Many have lost track of the fact that the acquisition by Burger King is not the first time that Tim Hortons has been purchased. Back in 1995, the donut chain was acquired by Wendy’s based on the success of an initial combined store in the town of Montague on Prince Edward Island. Wendy’s ended up spinning off Tim Hortons in 2006.

The good news for Tim Hortons fans is that during that merger, the company’s brand remained intact, although it was not repatriated to Canada until 2009 (Wikipedia). Canadians remain split on their opinions about the proposed merger (WIVB).

Staying on the Cutting-Edge of Donuts

In an effort to stay ahead of the curve on new donut creations, Tim Hortons recently conducted an experiment in crowd-sourcing innovation. The company conducted a Duelling Donuts contest which saw more than 76,000 entries of new donut ideas (Huffington Post). After a show-down with eight finalists, Jennifer Brown of Glencoe, Ontario was declared the winner with her Love Reese’s to Pieces donut, consisting of a chocolate yeast base, filled with crème brûlée, covered in chocolate fondant and white dots, and topped with Reese’s candy.

The company also introduced a new cheesecake donut available in either strawberry or chocolate flavors at participating Canadian locations (Huffington Post), as well as the Buffalo Crunch donut that features a spicy sauce and crunchy corn chip topping that made an appearance at The Great New York State Fair in Syracuse. Timmie fans will be relieved to know that there are no plans for a wider release of the strange donut (Toronto Life).

The only other real controversy on the Tim Hortons front besides the merger with Burger King has to do with the actual size differential between its large and extra-large coffee cups. The extra-large cup is taller, but also narrower, leading many to wonder about the actual volumes of the two cups. The large cup is now supposed to be 20 ounces (previously called extra-large) while the new extra-large cup should be 24 ounces. If the cups are filled to the marked line that staff use, the measurements are accurate (CBC).

The practice of US companies reincorporating abroad was openly criticized by President Obama in the weeks before the proposed merger of Burger King and Tim Hortons that would place the new company’s headquarters in Canada with its lower corporate tax rates. While some politicians seethe about this tax-dodging, US companies continue to court potential foreign partners (Forbes).

One of the most important things to keep in mind with the Burger King-Tim Hortons merger is that it’s not yet a done deal. As one commentator put it, “It is not clear if the US will try and block the deal or if the net benefit to Canada test will be met” (Investing.com). Should a substantial groundswell of opposition emerge (so far it hasn’t), the Canadian government could find a way to derail the deal, as it has done on other occasions, but so far Prime Minister Stephen Harper has been supportive (iPolitics).

The donut sector, however, has its own challenges as it is not a growth industry and companies continue to struggle, with the stocks of Dunkin’ Donuts and Krispy Kreme down 3.8% and 8.4% respectively so far this year, even as the S&P continues to make new highs. Coffee, however, is a high-margin business, considering it can be made for 10 cents per cup and sold for $2, and Tim Hortons commands an impressive 75% share of the Canadian fast food coffee market (iPolitics).

The 10 must-read news stories about the Tim Hortons franchise presented above make one thing clear: The company is one to keep an eye on.