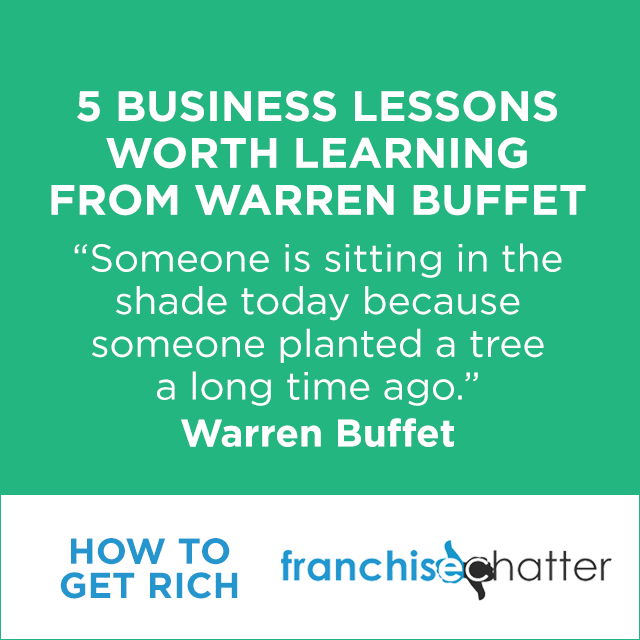 “Someone is sitting in the shade today because someone planted a tree a long time ago.” ~ Warren Buffet

Investment guru Warren Buffett may be in his 80s (he was born on August 30, 1930), but he’s still going strong as one of the most successful investors in history. Most of his deals seem to pay off as well, as evidenced by his net worth of $67 billion, which makes him one of the richest people in the world. (As he continues to beat the investment odds, he also recently beat prostate cancer.)

His ability to turn money into a lot more money has earned him the hallowed nickname of the Oracle of Omaha, the Nebraskan city where he was born and which he still calls home. He is the chairman, president and CEO of Berkshire Hathaway, the holding company through which he buys up major interests in other companies.

Some people think that “holding” means temporary ownership, which can be true in some cases, but as Buffett himself says, “When we own portions of outstanding businesses with outstanding managements, our favorite holding period is forever.”

Here are five essential lessons to learn from this seasoned investor:

Unlike many investors, Warren Buffett isn’t looking for quick turnarounds in stock purchases. What he looks for are companies that are incredibly solid on basic business fundamentals. When circumstances result in the stocks of such companies becoming available at decent prices, then he’ll buy them up.


The most recent example of this is his 2013 purchase of $23 billion worth of Heinz stock, granting Berkshire Hathaway half ownership of the company. For Buffett, Heinz represents what he looks for in a company: low risk, solid balance sheet and great management. It is a company that has also stood the test of time, founded in 1869, and with brand recognition approaching that of Coca Cola or IBM, which is also important in the Buffett investment approach.

2. It’s the Longer Term that Counts

Whether it’s running a business or making financial investments, one of the most persistent flaws in traditional approaches is chasing short-term profits. The plain fact of the matter is that Buffett never invests for the short-term. His primary concern has always been making the best decisions for the longest term possible.

The lesson here for entrepreneurs is clear: If this investment genius would never invest in a company that doesn’t have a solid long-term plan in place, why would anyone running a business fail to create a long-term plan? But doing so requires bucking the trend to chase those short-term profits and satisfy investors looking for quick gains. Both are completely opposite of the Buffett approach.

If you feel a bit squeamish about taking this long-term approach, just remember proof of the soundness of the approach can be found in Buffett’s company, Berkshire Hathaway. If you had invested $10,000 in the company back in 1965 when Buffett took the reins and held on to that investment for the long haul, it would be worth more than $35 million today. Shares of Berkshire Hathaway stock currently sell for $206,000 each!

Buffett is very optimistic in his approach to investment because he’s always been optimistic about the overall US economy in the long term. After all, if you think about where America was just 200 years ago and where it is today, it’s pretty astounding. Buffett has always said that America’s best days lie ahead. Sure, there can be pretty serious setbacks and crises along the way, but looking at the big picture is what keeps Buffett optimistic. Here’s how he puts it:

“In the 20th century, the United States endured two world wars and other traumatic and expensive military conflicts; the Depression; a dozen or so recessions and financial panics; oil shocks; a flu epidemic; and the resignation of a disgraced president. Yet the Dow rose from 66 to 11,497.”

Buffett recognizes that while it takes an entrepreneurial spirit and drive to get a business started, the long haul of corporate success is built on stellar management. He looks for three qualities in a company’s management: integrity, intelligence and energy. All three must be present for him to consider buying into a company.

However, one also has to recognize that management can come and go in cycles of quality as well. That’s why he goes for the combination of great management as well as a business with solid fundamentals. As he puts it, “I try to buy stock in businesses that are so wonderful that an idiot can run them. Because sooner or later, one will.”

The concept of value is what really brings all of these lessons together. Buffett learned this from reading what he considers to be the most important investment book ever written, The Intelligent Investor by Benjamin Graham. The author became Buffet’s mentor, and eventually his employer as well. The mantra he learned is this: Price is what you pay. Value is what you get. If you focus on companies bringing real value to the world, and bide your time until the company’s stock is offered at the right price, you won’t get rich quickly, but you will get rich slowly, and what’s wrong with that?

The Buffett approach to business and investing is not sexy. It’s not about getting rich quick. But it is clearly an approach that works. The combination of these five lessons – solid business fundamentals, long-term planning, big-picture optimism, stellar management and a focus on value – have resulted in Buffett’s personal net worth of $67 billion and a company whose stock has risen at an average annual rate of 19.7% for more than 45 years. The five lessons presented here from Warren Buffett are clearly worth their weight in gold!

Next post: Why Invest: How Blaze Pizza is Lighting and Leading the Way in the Custom Pizza Craze