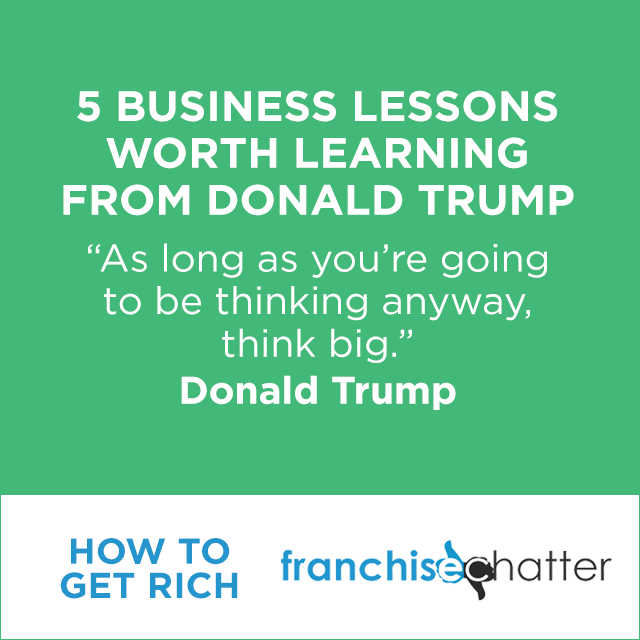 “As long as you’re going to be thinking anyway, think big.” ~ Donald Trump

Donald Trump is without a doubt the most recognizable and well-known real estate entrepreneur in the United States. Some would even say he’s the most famous business leader in the world. His hosting of the hit reality shows The Apprentice and Celebrity Apprentice on NBC reportedly pays him $3 million per episode, and his trademark phrase, “You’re fired!” has contributed to his superstar status.

In spite of all this fame and recognition, it is curious that Trump’s net worth is “only” $3.9 billion. That seems paltry compared to some of the other entrepreneur CEOs covered in previous articles, such as Amazon founder Jeff Bezos, Google co-founder Larry Page and Facebook co-founder Mark Zuckerberg, each of whom has a net worth hovering in the $30 billion range.

Here are five lessons to learn from an entrepreneur who has clearly been around the block more than just a few times:

“The Donald” has proven himself to be a master at building a name that blends the personal brand and the business brand into a veritable juggernaut revered by everyone. What’s interesting here is that he doesn’t even own some of the most amazing properties around the world that bear his name! His brand is so valuable that companies will pay him premium fees just for the privilege of putting his name on their building (a prime example is Trump World in Seoul). Now that’s effective branding.


He makes sure that anything bearing his name meets his high standards for quality. Then he can just sit back and enjoy the additional exposure for his brand that comes with having another Trump property out there in the market. Savvy deals like this allow him to continue enhancing his brand without adding a bunch of risky assets to his balance sheet.

Trump lives an extravagant, lavish lifestyle. He does this not just because he enjoys it, but because it has become a key part of his brand and business strategy. For better or worse, the kind of lifestyle he lives is one that many people want for themselves, which means all that extravagance attracts more adoring attention to his brand. It’s an image that he consciously maintains because it facilitates his move into new ventures and lines of business.

But where it really comes through is in his approach to sales. You’ve heard the old phrase “you have to spend money to make money,” and Trump has claimed this as a vital sales strategy. If he’s taking a prospect out to dinner, he’s not going to do it on the cheap and only spend a couple hundred dollars. To the contrary, he’s going to treat the prospect to a feast that will not soon be forgotten, and the price tag won’t be either. But he sees it as money well spent if it helps land the deal, which you can bet will be worth millions.

Amongst the various companies that bear the Trump name, there have been no fewer than four Chapter 11 bankruptcies. Although he has managed to never have to declare personal bankruptcy, Trump is no stranger to failure. But he also hasn’t let his setbacks get the better of him. Trump has made billions, lost billions, and then made those billions back, and he’s done this several times.

Besides the obvious drive and persistence it takes to overcome such volatility, he clearly has a particular take on the whole notion of failure. When such a setback occurs, Trump might not even recognize it as a failure. He’s more apt to say, in his own words, “It’s a blip, not a catastrophe.”

When you’ve soared into the stratosphere of success the way Donald Trump has, you’d think he might become increasingly difficult to relate to for the average person, but nothing could be further from the truth. Part of the ongoing strong appeal of Donald Trump is his odd mix of both hubris and humility.

To reach the heights of success, he has had to be strong, combative, fiercely passionate and supremely self-confident. He clearly loves to put his name on impressive real estate ventures. And yet in the midst of all that hubris, Trump displays a disarming humility at the same time. He quite readily pokes fun at himself and his flaws.

Perhaps with that hairstyle that Time magazine lists as one of his ten major failures, he has no choice – it’s better to proactively beat everyone to the punch rather than being the passive victim of all those jokes. And we won’t even get into the marriages…

Once The Donald realized how valuable his real estate brand was becoming, it was only natural that he would explore applying it to other industries and products. He has done so with vigor and enthusiasm in an effort to greatly diversify his revenue streams. There will inevitably be some hits and some misses in such efforts. Here’s a run-down of both:

Trump Books: Who wouldn’t want to read a book by the world’s most famous business leader? He has 18 of his own titles to choose from.

Brand Licensing: The piece of his empire that licenses the Trump name to worthy real estate projects is the most valuable, clocking in with a $562 million valuation.

Donald J. Trump Signature Collection: His line of menswear and accessories seems to be doing quite well at Macy’s.

Trump Airlines: His attempt to put the Trump panache onto a fleet of 17 Boeing 727’s failed miserably in the late ‘80s and early ‘90s.

Trump Mortgage: His bid to become a home-lender powerhouse lasted less than 18 months, stymied by the housing bubble and financial crisis.

Trump Vodka: His foray into the alcohol business has left him with little beyond a serious hangover.

Trump’s real estate savvy is unquestioned, and he’s currently expanding from his primary holdings in the Big Apple to the nation’s capital with his Old Post Office renovation just five blocks from the White House. He’s transforming the historic building at 1100 Pennsylvania Ave. NW into a 270-room luxury hotel that many hope will become the catalyst for a revival of America’s Boulevard.

High profile projects like that drive The Donald’s net worth of $3.9 billion, along with his world-renowned brand and the fame that comes with it.