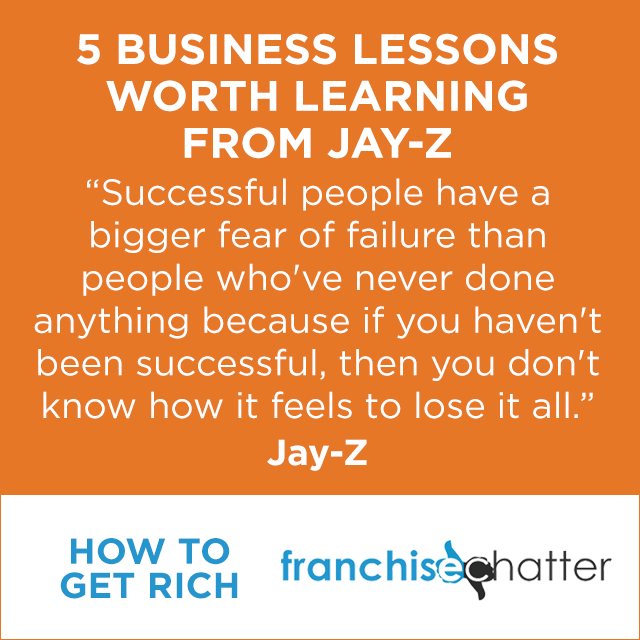 “Successful people have a bigger fear of failure than people who’ve never done anything because if you haven’t been successful, then you don’t know how it feels to lose it all.” ~ Jay-Z

Whether you’re a fan of rap and hip-hop or not, Jay-Z, with an estimated net worth of $520 million, is widely recognized as one of the most financially successful recording artists in his genre. At 44 years of age, Shawn Corey Carter (Jay-Z is his stage name) is not only one of the best-selling artists of all time (75 million records sold and 17 Grammy Awards won), he’s also a successful entrepreneur who has leveraged his recording success into clothing lines (Rocawear), a sports bar chain (the 40/40 Club) and record/entertainment companies (Def Jam Recordings, Roc-A-Fella Records and Roc Nation).

Oh, and he’s married to Beyoncé.

Here are five business lessons to learn from Jay-Z:

Setting goals seems almost too basic to mention here, and yet Jay-Z’s success serves as a great reminder that there are some tried-and-true fundamentals that deserve your full attention.

Jay-Z reminds us all that goals need to be SMART (specific, measurable, achievable, relevant and time-bound). You may be surprised to learn that fundamental to Jay-Z’s success was having a realistic mix of both short-term and long-term goals. He broke projects down into the small steps that would inevitably lead to the accomplishment of the larger goal.


And perhaps most fundamental of all – he wrote them down on paper. His example shows that you’re not truly committed to a goal unless you’ve written it down, figured out how you’ll measure progress, and then take the time to periodically assess where you’re at and what might need to change to ensure successful achievement of the goal. Words to live by.

Complexity is real, and it causes major hang-ups for many entrepreneurs. But we also often make things much more complex than they are or need to be. He learned this the hard way with his music – if the lyrics and melodies became too complex, poor sales were a clear indication that things needed to be simplified. That was the case with his debut album, and the course correction he was willing to make marked a definitive turning point in his career.

How does this translate into business? Think of the simple and incredibly user-friendly design of Apple products. It also means creating, honing and perfecting your elevator pitch – boiling your basic message down into something incredibly simple that can be conveyed effectively and powerfully in just a few minutes or less.

As one DJ who knew him in the early days has said, “He was a hustler when I met him, and he’s a hustler now.” But the word “hustle” when properly applied to Jay-Z doesn’t carry a negative connotation. Instead, it’s about seizing opportunities when they present themselves, and working hard to make the most of them. Jay-Z always keeps one eye trained on the next opportunity to generate new streams of revenue. Diversification in that sense has become one of his mantras, as is consistency.

Jay-Z has carved out a personal brand based on who he is. He sticks to it because he knows it’s not just a passing fad, it’s solidly grounded in his personal identity. That kind of consistency flies in the face of whatever is the “hot thing” at the moment, and which often turns cold in short order.

Rather than beat the standard drum of persistence and never quitting, Jay-Z’s twist on this is holding fast in the face of resistance and rejection. Rather than allowing the resistance to get you down, think of it as a positive thing – you’re affecting people and making them react, whether that reaction is positive or negative. If you’re convinced that you’re onto something good, stick with it.

The ultimate illustration of this is good old Colonel Sanders of Kentucky Fried Chicken. When he first started trying to sell his secret recipe consisting of 11 herbs and spices, the rejections started piling up. But he stuck with it. After what must have felt like a very long seven years, he did finally sell his recipe – for a finger-lickin’ $15 million!

Jay-Z was rejected by plenty of major record labels in the early days, but he stuck with it. Twenty years later he’s reached the pinnacle of success, both musically and financially.

Jay-Z is always on the lookout for partnership deals that move his brand forward. When it came time to promote the release of his 12th album, Magna Carta…Holy Grail, he formulated a killer strategy to make a splash. His idea was to promote the album during game five of the NBA finals (he had an ownership interest in the Brooklyn Nets) in a way that would allow fans to get the album early. The result was the partnership Jay-Z forged with Samsung.

The ad during the NBA game featured a highly stylized call to action for Samsung Galaxy phone owners to download a free app that would allow them to access the album a full five days before its official release. In an additional sweet move, Samsung itself prepaid for a million digital copies of the record at $5 each, thereby guaranteeing platinum status even before the official release. That was a very successful strategic partnership, and one that the Wall Street Journal valued at a mind-boggling $20 million.

Jay-Z is the epitome of success in the world of hip-hop and rap. Important in his journey is the fact that at one point he was a substantial drug dealer, mostly in Maryland. When he finally realized he could make it in the music world, he turned his back on drugs and never looked back. He got out just in time and made the most of his positive transformation, gaining incredible success in music and then expanding into various side-ventures that have proved profitable. His net worth of $520 million just goes to show that even a very checkered past needn’t stand in the way of achieving success.